What might the image of treachery look like? Consider a painting of two men, one whispering into the other’s ear. The speaker, his face in profile, has his mouth slightly open, enough for us to see his teeth. His eyes fall like a ball under gravity toward the other man’s face. The second person, half his face out of view, listens almost expressionless, except for the dodgy expression in his left eye in the upper-right corner. The frame is tight on their faces. Many parts of the image are dark. Treachery oozes from their eyes, from their teeth.

The moment itself is real. The work is a representation of Benedict Arnold, the American Revolutionary officer turned traitor, informing Sir Henry Clinton, the British commander in chief, in 1780 of Gen. George Washington’s secret plan to cross the Hudson. This painting, Panel 11, 1955, is one of the 30 depicting the artist Jacob Lawrence’s re-examination of American historical moments from 1775 to 1817 at the Metropolitan Museum of Art.

Organized by and first exhibited at the Peabody Essex Museum in Massachusetts before arriving at the Met, “Jacob Lawrence: The American Struggle” brings together recently reunited panels of a series painted during the civil rights era. One of its great strengths is showing the way this African-American artist expanded the confines of how the American Revolution and the early decades of the republic are considered, reinterpreting the roles of all parties involved. It also succeeds in making visible, and even visceral, America’s history with the struggle for racial and political equality. 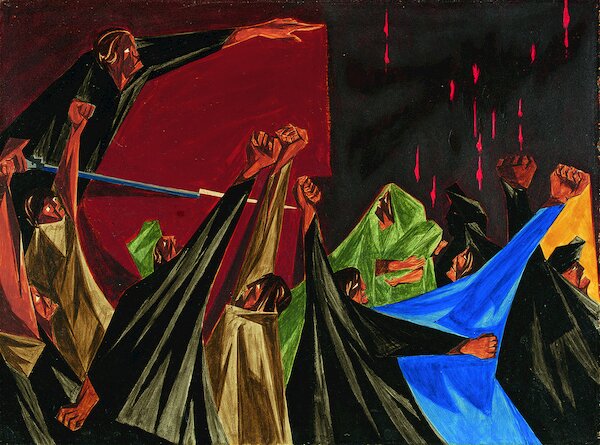 At the Peabody Museum, the series was exhibited alongside contemporary artists but at the Met the focus is on Lawrence, with four of his works from the Met’s permanent collection positioned at the entrance. Curated by Elizabeth Hutton Turner, Austen Barron Bailly and coordinated by Lydia Gordon, the presentation at the Met by Randall Griffey and Sylvia Yount organically utilizes the long rectangular shape of Gallery 913 and makes it possible for viewers to really follow the series’ story style from panel to panel.

Jacob Lawrence (1917-2000) was one of the best-known artists of his time. Unable to make it into the government-funded Federal Art Project because he was too young, Lawrence began very early to make series of paintings that retold historical narratives. At 21 he made a series of 41 paintings of the Haitian general Toussaint L’Ouverture, who had led a revolution to free slaves in Haiti. He also produced series on the lives of Harriet Tubman and Frederick Douglass. Then, at 23, he produced the masterpiece, “The Migration of the Negro,” now known as “The Great Migration” — a collection of 60 panels narrating the movement of hundreds of thousands of African-Americans from the South to the North. It showed his style of “dynamic cubism,” which he claimed wasn’t really an influence of French art as much as the shapes and colors of Harlem. His later series “Struggle: From the History of the American People,” created from 1954–1956 (and from which the exhibition at the Met derives its name), follows the same fashion.

Lawrence worked with egg tempera — a permanent, fast-drying paint medium — so he always planned his paintings in advance. But “Struggle” required extra research and planning. He spent time at the 135th Street branch of the New York Public Library (now the Schomburg Center for Research in Black Culture), pulling sources and inspiration from the archives. Originally intended to be 60 panels, each 12 x 16 inches, he ended up painting 30, five of which are missing, and two of which have no image record.

Because Lawrence was painting the series during one of the most politically charged periods in American history, certain pictures from the series seem to draw from the events of his time.

The first panel in the show is the picture of a man pointing, a rifle in his other hand. Below his outstretched arm is a group of men with their fists held high. Behind them, a woman with a child in her arms. Strips of blood fall from above their heads. This panel was painted in 1955, the same year that Moses Wright, the great-uncle of Emmett Till, stood up in a courtroom to identify the abductors of this Black teenager who had been accused of whistling at a white woman and was later tortured, lynched and thrown into the Tallahatchie River. In the 1955 photograph by Ernest Withers, Wright is seen standing erect, his arm stretched out, his finger steady and full of power. The gesture is similar to Jesus’ in Caravaggio’s “The Calling of Saint Matthew.” Usually, one points to identify, to select, to order, to direct. Jesus’ finger, backed by divine law, alters Matthew’s destiny. But Wright’s finger, dismissed by the law of the land, fails to bring justice to Till.

Another example of Lawrence’s juxtapositions to events of his day is Panel 11, depicting an informer whispering into the ear of his contact, and which bears Lawrence’s caption “120.9.14.286.9.33-ton 290.9.27 be at 153.9.28.110.8.19.255.9.29 evening 178.9.8 — an informer’s coded message.” Written in the numerical substitution system used by Benedict Arnold and deciphered by the loyalist poet Jonathan Odell, it passed along the information that “General Washington will be at King’s Ferry Sunday evening next.”

In 1954, a year before the painting was made, the Army-McCarthy hearings had held America spellbound on TV for 36 days, drawing an estimated 80 million viewers. Lawrence’s painting, created when the Cold War was heating up, seems to allude to one of the photographs from the hearings in which Senator Joseph R. McCarthy, who had claimed to have a list of 205 State Department employees who were members of the Communist Party, is seen whispering with his chief counsel, Roy Cohn. In the photograph, an exceptional flash of white lights up both men’s ears. Between their heads is a blank space, filled with darkness. Their mouths are slightly open, and something sinister seems to rest upon McCarthy’s teeth. Lawrence preserves the teeth in his painting, showing us how a government might collapse under the weight of a whisper.

Throughout “Struggle,” Lawrence’s scope is wide but inclusive. Trying to retell an already established history properly requires looking through the cracks, for bits that have been edged out. In Panel 12, 1955, captioned “And a Woman Mans a Cannon,” Margaret Cochran Corbin (1751-1800) is seen operating a cannon in place of her dead husband, whose body lay at her feet, defending Fort Washington in what is today Upper Manhattan. “It’s very unusual,” Ms. Yount says. “I can’t think of another historical American painting to feature a woman in combat.”

Lawrence, while grappling with the expansive history of the American Revolution, focuses on the role of enslaved Black people in many of the paintings. Sometimes he does it subtly. In one particularly striking picture, Panel 25, 1955, a bright wall fills about 70 percent of the painting. On top of the wall, a line of American soldiers bleed while defending their position. Beneath them, at the foot of the wall, fallen British soldiers crumble underneath a ladder. This seven-foot-high wall built by enslaved men out of cotton bales, logs, and earth stretched for about a mile and was responsible for protecting American fighters in the Battle of New Orleans on Jan. 8, 1815. But in the painting, everything is falling, including the victors themselves. The only thing standing is the wall, built by slaves.

The exhibition offers black-and-white reproductions of some of the missing panels, suggesting what they could have looked like. Artists have always doubled as historians, and much of what we know today about past civilizations and empires comes from the art that survived their fall. Lawrence’s work will come to be seen as a juggernaut among American historical documents. But the most powerful inclusions are the blank panels, whose content remains unknown. Positioning themselves as blind spots, they remind us that, when it comes to history, nobody has the full picture.