How the Bee Gees Stayed Alive

Discovered, embraced, disbanded, reunited, ignored, reinvented, hailed, scorned, disguised, recognized — the Bee Gees’ long career was filled with improbable ups and downs. Most bands are lucky to get one Top 10 hitmaking streak. The Bee Gees — the brothers Barry, Robin and Maurice Gibb — had at least two, singing heartache ballads in the late 1960s and re-emerging in the mid-1970s as the multiplatinum pop face of disco.

“The Bee Gees: How Can You Mend a Broken Heart,” an HBO documentary directed by Frank Marshall, moves sympathetically and efficiently through the group’s decades of making music. It traces the ways artistic instincts, family dynamics, business considerations, cultural shifts and sheer coincidence can shape memorable songs.

In the documentary, abundant archival footage — a cavalcade of flashy fashions from 1960s frills to 1980s cool — coalesces around 2019 interviews with the last surviving member of the Bee Gees, Barry Gibb, who is grizzled and thoughtful but by no means retired. The documentary shows him performing as a headliner at the 2017 Glastonbury Festival, and he has an album due in 2021, “Greenfields,” that revisits the Bee Gees catalog with country musicians. The documentary also features the Bee Gees’ studio collaborators and, cannily, members of other bands of siblings: Oasis and the Jonas Brothers.

The Bee Gees were prolific and often masterly songwriters, and they sang three-part harmony as only siblings can. Many of their songs are credited to all three brothers. “The only way I can describe how we work at it is to become one mind,” Maurice Gibb says in a clip from a 1999 interview.

They started performing together before they were teenagers, in the late 1950s, looking to R&B vocal groups like the Mills Brothers and then, like countless others, to the Beatles. And like the Beatles, they soaked up all sorts of music: rock, country, gospel, vintage pop.

But nearly from the beginning of their recording career, the Bee Gees clearly had something of their own. Barry and Robin Gibb, who traded off lead vocals, each brought a tremulous drama to their melodies, a striking mixture of eagerness and hesitancy. In an era of brash frontmen, they could sound like they were painfully shy yet simply unable to hold back.

From 1967 to 1970, the Bee Gees released a string of hit ballads including “Massachusetts,” “To Love Somebody,” “I’ve Gotta Get a Message to You,” “I Started a Joke” and “Words.” With melancholy lyrics, delicately blended voices and careful, often Baroque-tinged productions, their songs offered yearning and solace in psychedelically turbulent times. Around the hits, their albums — notably “Odessa” — floated larger musical and poetic concepts and more eccentric productions.

In 1969, egos boiled over. Robin quit the Bee Gees to try a solo career, and he and Barry sniped at each other via interviews for over a year as Maurice played go-between. They regrouped — in part to support their manager, Robert Stigwood, as he started his own company — and came up with more hits: “Lonely Days” and “How Can You Mend a Broken Heart.” 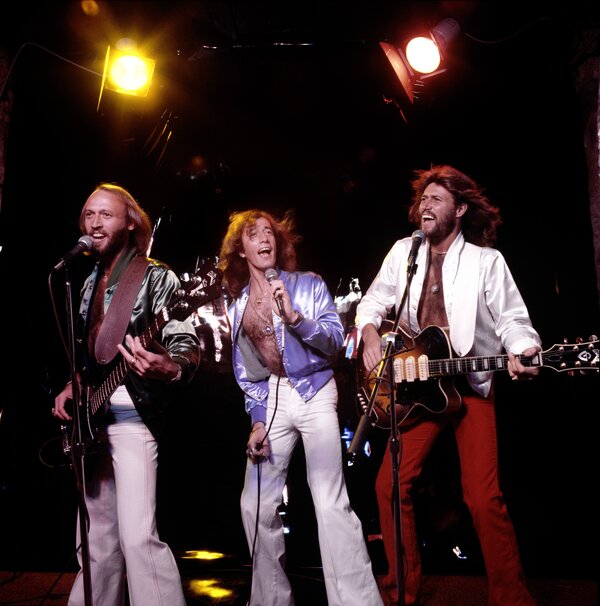 Luckily Stigwood also managed Eric Clapton, who suggested that they record where he had, at Criteria Studios in Miami. There, in 1975, some alchemical combination of sunny skies, close collaboration with their backing band, the stirrings of disco culture and a producer close to American R&B — Arif Mardin — led to the Bee Gees picking up their tempo and finding a brisk, guitar-scrubbing groove they would use in a new song, “Jive Talkin’.” In the documentary, Gibb connects it to the clicking rhythm he heard driving across a bridge to the studio each day.

Because the Bee Gees had fallen so far out of fashion, their label sent “Jive Talkin’” to radio stations without identifying the group. With a blank label, the song became a radio hit; the Bee Gees were back.

There was another breakthrough at the Criteria sessions. Barry Gibb was ad-libbing some backup vocals at the end of “Nights on Broadway” when he happened upon a sound he hadn’t fully realized he could make: a bright, piercing falsetto, androgynous and insistent, linking the Bee Gees to a longtime falsetto tradition in Black American music. It was a voice — a whole new sonic persona for Gibb, not shy at all — that would leap out of club and radio speakers in “You Should Be Dancing” and in songs the Bee Gees wrote for “Saturday Night Fever.”

When they wrote those songs, the Bee Gees were at the Château d’Hérouville, a dumpy old French estate where Elton John had recorded the album “Honky Chateau.” During the sessions there, the band’s drummer, Dennis Bryon, was called away for a family emergency; to keep working, Albhy Galuten, a co-producer, made a tape loop from two bars of “Night Fever,” slowed it down and ran it as the Gibbs brothers wrote “Stayin’ Alive.” The mechanical feel of the loop gave the song something mysterious and tenacious; it stayed in the finished song, and has spawned innumerable looped drumbeats ever since.

The 1977 “Saturday Night Fever” album, a two-LP anthology of disco hits and Bee Gees songs, became a record-setting blockbuster. Although disco had emerged from Black music and Black and gay clubs — as the documentary takes pains to point out — the Bee Gees, smiling in their silvery suits, became disco’s pop figureheads. In the late 1970s, the Gibb brothers’ music was everywhere: their own hits; songs for their younger brother, Andy; songs written for others. In 1979 they toured stadiums. They didn’t realize an anti-disco backlash was building.

For a directorial flourish, Miller intercuts a euphoric July 1979 Bee Gees concert in Oakland with an event that happened two days later: “Disco Demolition Night,” promoted by Steve Dahl, a rock disc jockey who had popularized the obnoxious slogan “Disco Sucks.” Between games of a Chicago White Sox doubleheader at Comiskey Park, Dahl exploded a pile of disco records, which set off a hugely destructive crowd rampage. In the documentary, Vince Lawrence, who worked as an usher at Comiskey Park that night and later became a house-music producer, describes the event in hindsight as “a racist, homophobic book-burning.”

The Bee Gees finished their tour amid bomb threats; radio stations pivoted away from dance music and shunned the Bee Gees. “We’re just a pop group, we’re not a political force,” a defensive Barry Gibb says in television footage from the time. “We’re just making music, and I don’t think there’s any reason to chalk us off because we existed in the ’70s and we would like to exist in the ’80s.”

Avoiding the spotlight, the Gibb brothers persisted as songwriters and producers. The longtime Bee Gees sound — tuneful midtempo ballads, vocal high harmonies, distinctive chord progressions — comes through unmistakably in songs they wrote for others, including Barbra Streisand’s “Woman in Love,” Dionne Warwick’s “Heartbreaker” and the Kenny Rogers-Dolly Parton duet “Islands in the Stream.” Even in post-disco purgatory, the Bee Gees were still hitmakers. And as disco and the backlash receded (and dance music never went away), the Bee Gees returned more modestly, making albums every few years and garnering the respect they deserved. Yes, they got into the Rock & Roll Hall of Fame — but not until 1997.

Maurice Gibb died in 2003, Robin Gibb in 2012; that vocal blend is extinct. In the documentary, Barry Gibb understands exactly what his brothers and his band accomplished. “We never really had a category. We just had periods and we managed to fit into different eras,” he reflects. “We didn’t always connect. But we stayed around.”

Paloma Elsesser Reveals the Importance of Being a Curve Model: "My Participation Isn't Just About Me"
Entertainment