Herbert Kretzmer, Who Wrote Lyrics for ‘Les Misérables,’ Dies at 95

Herbert Kretzmer, a London theater critic who wrote the English lyrics to an all-but-forgotten French musical called “Les Misérables” in 1985, and gave new life to what has become one of the world’s most successful theater productions, died on Wednesday at his home in London. He was 95.

A South African journalist who sold his accordion to buy passage to Europe, Mr. Kretzmer failed as a novelist in Paris, playing a piano for meals in a brasserie. A thief stole all of his money on his first day in London. He wrote features and columns for London newspapers, and became a theater critic for The Daily Express for 16 years and then a television critic for The Daily Mail for eight more.

But he loved music and starting in 1960, while still writing for newspapers, he began developing a second career as a lyricist and songwriter. He wrote music for the BBC’s satirical television show “That Was The Week That Was” and collaborated with the French singer Charles Aznavour on about 30 songs, including the international hits “She” and “Yesterday, When I Was Young.”

The British producer Cameron Mackintosh took notice and asked Mr. Kretzmer to reimagine an obscure musical that had opened and closed after a few months in Paris five years earlier, in 1980. It was not an alluring prospect.

France had no tradition of musical theater, and “Les Misérables” was based on Victor Hugo’s epic tale of 19th-century student uprisings, with teeming streets, brothels, sewers and a vast panorama of episodes and characters who love, fight and die at the barricades.

And it was all sung, in French.

Mr. Kretzmer’s task was not to literally translate the original libretto, by Alain Boublil and Jean-Marc Natel. That might have been impossible. Songs, like poems, with their subtle nuances, references and allusions, are notoriously resistant to translation. And Mr. Kretzmer’s French was spotty anyway.

What he tried to do instead was to capture, in English, the spirit of Hugo’s tale of revolution — the songs of angry men and women yearning for freedom. 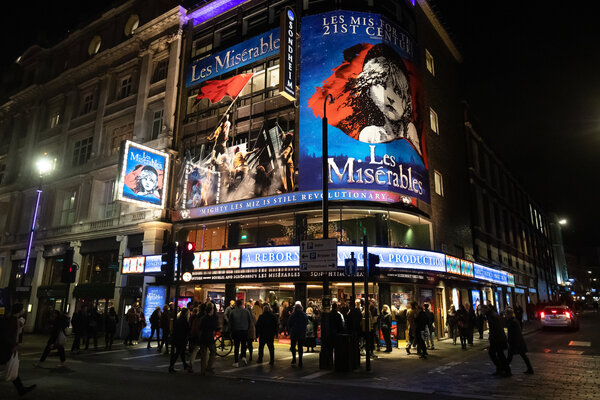 “Words have resonance within a culture; they have submarine strengths and meaning,” Mr. Kretzmer told The New Yorker in 2013. “Translation — the very word I rebut and resent, because it minimizes the genuine creativity that I bring to the task.”

“The show I inherited from Paris ran for just two hours,” he added. “The show I wrote in English ran for just over three hours. You don’t need to be a math whiz to calculate that at least a third of the play did not exist before I got my hands on it.”

With the Kretzmer libretto, additional lyrics by James Fenton and music by Claude-Michel Schonberg, “Les Misérables” opened in London on Oct. 8, 1985. A few critics found it intriguing and perhaps even important, but most pronounced it a disaster.

“A lurid Victorian melodrama,” concluded a critic in The Sunday Telegraph. “A witless and synthetic entertainment,” wrote another in The Observer. The Daily Mail, where Mr. Kretzmer then worked, called it “Les Glums.” Scholars condemned what they called a corruption of French literature for pop music.

But something was up. In the theater, as Hugo’s tale of oppression, liberation and redemption unfolded, audiences were moved nightly to sob and scream.

“The British public has long had less respect for theater critics than its American counterpart, but rarely has there been an occasion when so many nasty reviews counted for so little,” Benedict Nightingale wrote in The New York Times. “Clearly the power of the story or the music or both hit a nerve in the show’s first audiences, and word of mouth did the rest.”

Fan mail poured in. The box office was swamped. A three-month engagement sold out. Reviews improved. The London production ran continuously since 1985 until March this year, when the coronavirus pandemic shuttered London’s theaters, making it the West End’s longest-running musical and the world’s second-longest, after “The Fantasticks,” which ran Off Broadway for 42 years.

A Broadway production of “Les Misérables” opened in 1987 and ran 16 years, and there were Broadway revivals in 2006 and 2014. A Hollywood film version in 2012 earned more than $440 million. Showered with awards, translated into 22 languages, the musical has been performed by 100 touring companies and seen by 80 million people worldwide. Its estimated earnings are upward of $3 billion.

Herbert Kretzmer was born on Oct. 5, 1925, in Kroonstad, South Africa, one of four sons of William and Tilly Kretzmer, Lithuanian Jewish immigrants who fled the pogroms of Czarist Russia. His parents ran a furniture store. His oldest brother, Elliot, became mayor of Johannesburg.

Songs inspired Herbert. He had no musical training, but played the piano by ear. He graduated from Kroonstad High School and Rhodes University in Grahamstown, where he wrote lyrics for school musicals. In 1946, he began writing weekly cinema columns for Africa Film Productions. In the early ’50s, he was a reporter and entertainment columnist for The Johannesburg Express.

After landing in London in 1954, he wrote for The Daily Sketch and The Sunday Dispatch. As The Express’s theater critic from 1962 to 1978, he wrote 2,500 reviews and interviewed John Steinbeck, Truman Capote, Tennessee Williams and many stage and screen stars. He won two national awards as The Daily Mail’s television critic from 1979 to 1987.

Mr. Kretzmer married Elisabeth Wilson in 1961. They had two children, Danielle and Matthew, and were divorced in 1973. In 1988, he married Sybil Sever, an American. He is survived by his second wife, his two children and two grandsons, said Mr. Berlin, his agent.

In his second career, Mr. Kretzmer adapted and wrote the lyrics to a 1964 musical, “Our Man Crichton,” based on J.M. Barrie’s play, “The Admirable Crichton,” which ran for a respectable eight months in London. His collaboration with Mr. Aznavour for “She” (1974) virtually introduced the French singer to international audiences.

Mr. Kretzmer’s royalties from “Les Miz” amounted to about $20 million. He bought a townhouse in London and filled it with art, and was a celebrity wherever he went. Queen Elizabeth II named him Officer of the Order of the British Empire (OBE) in 2011.

But he was always at something of a loss to explain what had happened after that fateful opening night in London.

“When you are working on something like that, the hope is to avoid disgrace,” he told The Daily Mail in 2015. “You are thinking, ‘Please do not let me be too ridiculous.’” He recalled his shock the next day when Mr. Mackintosh, the producer, told him that the box office had never had a day like that in its history.

“I sat back in wonder,” Mr. Kretzmer said. “I have never been able to explain what happened. The overnight success of ‘Les Miz’ has become a myth now. But it literally was overnight.”