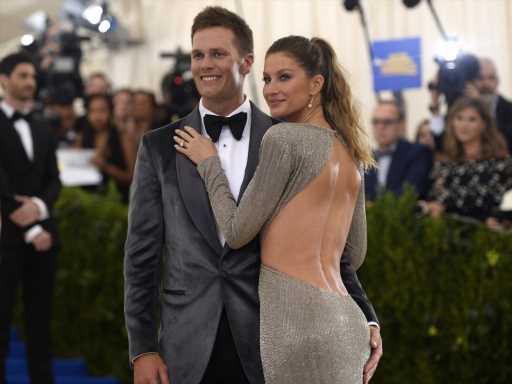 If Tom Brady’s return to the NFL hits a snag, it looks like he has a future in apparel — and maybe even modeling. The football star is launching a new underwear line, and we could hardly look away from the announcement video, captured by Brady’s wife of roughly 13 years Gisele Bündchen. Why? Well, the clip featured Brady wearing his Brady Brand underwear…and absolutely nothing else.

In the video, which was posted to the official Brady Brand Instagram account, Bündchen walks in on her husband in the bathroom in nothing but his boxer briefs. “Somebody has new underwear,” the longtime model’s voice can be heard saying from behind the camera. Although the father of three tried to cover up the camera with a towel, Bündchen was able to give everyone a close-up of her husband’s boxer briefs.

“Let me see… Is that Brady Brand underwear?” After that, the clip promptly ends. Since the video was posted, the comment section has been lighting up — and yes, there’ve been plenty of fire emojis strewn throughout. According to the caption, the Brady Brand launches their underwear collection this Thursday, June 9.

Described as “the most comfortable underwear ever that never loses its shape,” the caption also notes the underwear is “[Gisele] approved,” referencing Brady’s wife. Of all the Instagram posts we could’ve imagined going up yesterday, we definitely didn’t have Tom Brady sporting his brand’s underwear on our social media bingo card. If there’s one thing we can say about the post, though, this is definitely a side of Brady we’ve never seen before.

Before you go, click here to see celebrity couples where the woman has a higher net worth.