Home » Entertainment » ‘Game of Thrones’ Comes in for a Crash Landing ‘Game of Thrones’ Comes in for a Crash Landing

In the end, the dragons were just too big to control.

When “Game of Thrones” began eight years ago, there were no dragons. It started as a more intimate story of family and politics, and Daenerys Targaryen’s cat-sized fire babies didn’t hatch until the end of the first season.

They got bigger and bigger, and stronger and stronger, and with them grew the series’s reliance on spectacle and stunning set pieces. (As did the production scale; next to the show’s final battles, Daenerys’s conquest of Astapor, jaw-dropping back in Season 3, looks like a pickup soccer match.)

So it was fitting, if not entirely satisfying, that the climactic act and the tenderest emotional moment in the series finale, “The Iron Throne,” belonged not to any human but to Drogon, Daenerys’s last surviving lizard-child.

After eight seasons of carnage over the throne, it was Drogon — First of Its Name, Flame-Broiler of Cities — who came upon Daenerys, dead at the hand of her soldier/lover/nephew/betrayer Jon Snow, reared back, belched fire and smelted the seat of power into a puddle of lava.

It was the perfect climax for the show that “Game of Thrones” finally became. Its key scene belonged to a massive CGI animation whose motivations we will never fathom.

The image echoed the climax of “The Lord of the Rings,” in which Gollum, reunited with his precious ring, tottered and fell into the magma of Mount Doom. But Gollum, though monstrous, was a person. We knew his reasons: His twisted covetousness gave him an inadvertent, pivotal role in the grand drama.

[Looking for something to watch now that “Game of Thrones” is over? Sign up for our Watching newsletter for film and TV recommendations.]

Why, on the other hand, did Drogon do it? Grief? Animal instinct? A political epiphany that the hereditary monarchy must be smashed in favor of a system that involves consent of the governed? 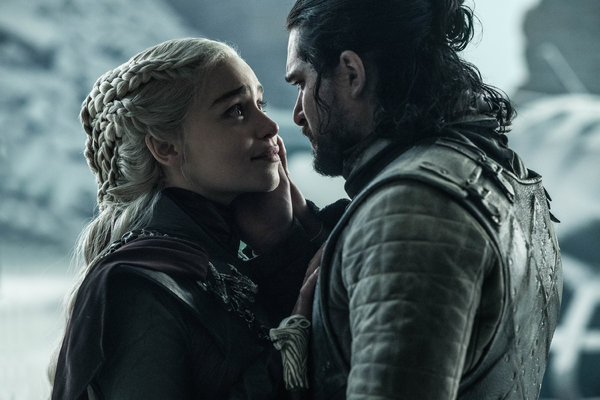 We’ll never know. It just looked cool. And as Drogon tenderly scooped Daenerys’s body into a claw and flew off into the gray sky, it was honestly more moving than the final interaction of the two humans in the scene.

This was the endgame of “Thrones” in miniature: Stunning on the outside, affecting in small moments, inscrutable at heart.

How well “Game of Thrones” ended depends largely on how well you think it pulled off the key turn of last week’s “The Bells,” in which Daenerys, having won the surrender of King’s Landing, presses her attack and incinerates the defenseless townspeople.

After a week, and especially after the finale, I’ve decided it was a botch.

Leaving aside whether the attack “should” have happened, it failed the basic job of a story, to give us a clear sense of what the central figure did and why. Is Daenerys insane? Did she have a rationale for targeting the defenseless that she never spelled out? Or were the citizens simply collateral damage in an overzealous drive to eradicate Queen Cersei’s troops?

[Read our recap of the series finale.]

I’m still not sure, and after the finale, I’m not convinced the makers of the show are sure either. In a Nuremberg-like speech to her victorious troops — which opened with the breathtaking image of Drogon’s wings behind an imperious Emilia Clarke, as if unfolding from her own shoulder blades — Dany spoke of having “liberated” the people of King’s Landing, who, to all appearances, were mostly dead.

Maybe she’d gone mad (an interpretation suggested in the attack, which she began with an expression so twisted that the bells may as well have been playing “The Merry-Go-Round Broke Down”). Or maybe most of the populace actually survived, like the Dothraki, whose encounter with the army of the dead at the Battle of Winterfell turned out to be a flesh wound.

We could only guess, clued partly by a dialogue between Jon and Tyrion Lannister (the opening figure and moral heart of the episode) that felt like a meta recap of fans’ defenses of “The Bells” online. Daenerys, Tyrion argued, had a history of cruelty. “Everywhere she goes, evil men die and we cheer for it,” he said. “And she grows more powerful and more sure that she is good and right.” Who created this monster? Dear viewer, it was us.

On paper, honestly, it almost makes sense. The problem is that a TV series doesn’t unfold on paper. The endgame had a great idea to work with: A woman, abused and traded like chattel, becomes so caught up in her zeal to do good that she sees anything but blind adoration as evil. But it never took us inside her perspective to make that change seem real and inevitable.

“Game of Thrones” instead relied on propulsion, like Wile E. Coyote running off a cliff. If things feel right enough in the moment, momentum carries you to the next thing. Look down, and you plummet. Maybe that’s the secret of dragon flight.

Once Drogon disappeared, it felt like “Game of Thrones” proper had ended, replaced, for the finale’s remaining half, by a smaller, thinner show concerned with checking off boxes, delivering farewells, comic relief and final answers.

The biggest one — who should rule? — was settled in a gathering of lords that played as if the writers David Benioff and D.B. Weiss were workshopping acceptable compromise outcomes. (Samwell Tarly went so far as to propose a direct democracy, a popular fan theory, and was hooted down.) Finally, Tyrion nominated Bran Stark, the psychic Lorax who communes with the trees, with the elevator pitch that he had the most powerful “story.”

It was the most Hollywood of solutions: The best forum for deciding how to govern a country, it suggested, was a writers’ room. (“There’s nothing in the world more powerful than a good story” is a beautiful sentiment, and one no character in a story should ever utter.)

Thus the three-headed dragon gave way to the three-eyed raven. I’ll let you argue about who “deserved” the crown, a position that did not end happily for the last [counts on fingers] half-dozen or so incumbents. But the resolution felt optimistic in a way that was justified by exactly zero of “Game of Thrones” to date.

What in the series’s history or view of human nature suggests that this won’t end in a seven-way civil war inside a few years? Everyone’s suddenly cool with an extra monarchy for Sansa and no one else? Will every would-be Littlefinger stop his or her scheming, pacified by the new administration’s infrastructure plans?

If my issue with “The Bells” was that it got the macro picture right and the micro wrong — it was clear why the show would burn King’s Landing, just not why Daenerys would — “The Iron Throne” was the opposite.

It was the small character moments that worked best here. There was Tyrion, in the silence before the final Small Council meeting, anxiously straightening the chairs around the table. (This was very much Peter Dinklage’s episode, and as much exposition as he had to deliver, he sold Tyrion as a man desperate to redeem his mistakes.)

There was Arya, permanently changed by a life of assassination and survival, sailing west of Westeros, a poignant, hopeful image that mirrored her setting off for Braavos at the end of Season 4. And as much as it made no practical sense that there’s still a Night’s Watch — are they guarding against the suddenly vanished Dothraki? — Jon rejoining the Wildlings, the outcasts among whom he once found a home, made emotional sense.

As a finale, “The Iron Throne” was limited by the story arc that led up to it. But it also recalled the epic and intimate moments that made “Game of Thrones” a genuinely exciting, absorbing appointment.

The thing about dragons is, you look at all that armor and musculature, and it’s a wonder they’re able to fly at all. “Game of Thrones” may seem like an obvious hit now, but it wasn’t. It was a genre that hadn’t worked at scale on TV before. It would require a standard of production it wasn’t clear TV could achieve. Add in a sprawling geographical and political story line, and it could have — and nearly did, with its legendarily bad unaired pilot — crashed and burned on takeoff.

It soared instead, but as it built mass and speed, it became hard to steer and seemed to have a mind of its own. It didn’t manage the artistic greatness — Tolkien as filtered through “The Wire” — that it aspired to. But it was a staggering, if uncontrollable, entertainment. In succeeding and growing, “Game of Thrones” became HBO’s 800-ton dragon. And where does an 800-ton dragon go? Anywhere it wants to.

James Poniewozik is the chief television critic. He writes reviews and essays with an emphasis on television as it reflects a changing culture and politics. He previously spent 16 years with Time magazine as a columnist and critic. @poniewozik