Frick Announces Plans for Its Two-Year Stay in Breuer Building

In the past, you might have seen Velázquez in a corner of the West Gallery, the Goyas in the East Gallery, and St. Jerome over the fireplace in the central Living Hall.

But in the Breuer building on Madison Avenue, all of the Frick Collection’s Spanish holdings will hang together.

This is one of the new ways — to be announced Wednesday — in which the Frick’s collection of paintings, sculptures, works on paper and decorative arts will be presented when the museum moves into its temporary digs in the Breuer, which it is calling Frick Madison, sometime early next year.

The Frick’s two-year tenure in the Breuer — the 1966 Brutalist building owned by the Whitney Museum of American Art and recently occupied by the Metropolitan Museum of Art — will allow the Frick to continue exhibitions while its 1914 Gilded Age mansion on Fifth Avenue undergoes renovation.

“We’re taking advantage of a totally different space,” Ian Wardropper, the Frick’s director, said in an interview. “They won’t have the rich bath of the Gilded Age to luxuriate in — they will have to stand on their own more.

“It’s an opportunity for us to re-examine the collection — how it looks in a fresh context,” he added. “The main thing is that we are able to continue to present the collection; otherwise during construction we would have gone completely dark and our holdings would have gone into storage.”

Moving into the Breuer while work begins on its mansion is a big step for the Frick, which has encountered intense community opposition to its $160 million renovation plans, which aim to increase exhibition space and to improve the museum’s circulation, amenities and infrastructure.

“We’ve been through a lot to get to this point,” Mr. Wardropper said. “We’re ready to move; we’re excited about going in.”

The Breuer installation will display for the first time all 14 paintings of Fragonard’s “Progress of Love” series, all eight of its van Dyck paintings in one room, and two 16th-century Mughal carpets, which have been in storage. 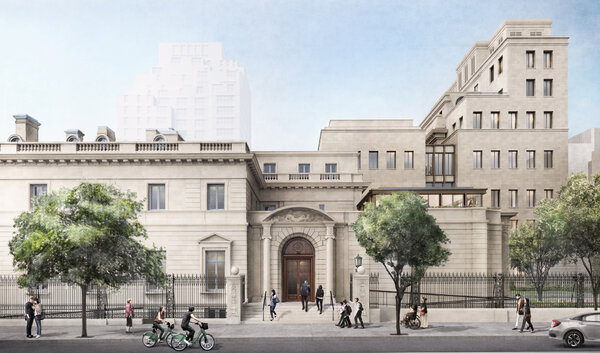 The Frick could have tried to reconstruct the ornate rooms at 1 East 70th Street — the original home of the industrialist Henry Clay Frick — in which paintings hang among French furniture, Asian and European porcelain and Renaissance bronze figures.

Instead the museum decided to rethink its approach in response to its new environs. “It’s a very challenging idea to move the Frick Collection into a Brutalist building,” said Xavier F. Salomon, the deputy director and chief curator, who organized the installation. “I have studied architectural history and I love the building, so I started thinking about the Breuer as a masterpiece in itself. The big thing is how to put the two things together — how do we make them work in a way that’s going to be totally different from what happens at 1 East 70th Street?”

“How do you translate the Frick into a different language but that keeps the essence of what the Frick is?” Mr. Salomon added. “It’s like translating ‘Moby-Dick’ into Japanese.”

In this spirit, Mr. Salomon said, the Frick’s reconfigured galleries — designed by Annabelle Selldorf, the architect for its larger renovation project — will only use materials and colors that were used by the Breuer, like grays, concrete and metal.

In the mansion, works of art from distinct periods and disciplines are juxtaposed in a residential house setting. In the Breuer, the Frick’s collection will be presented chronologically and by region. Each of the three exhibition floors will focus on areas of Europe, ranging from the earliest objects to the most recent.

While the Breuer will not have the intimacy of the Frick’s typical domestic setting, the presentation will remain as unmediated as possible, Mr. Salomon said, without display cases, labels or wall text. “It’s going to be a very immediate encounter with works of art,” Mr. Salomon said. “We’re trying to keep to the spirit of the place, but the house feeling is something we’re not going to be able to replicate in any way — we didn’t want to go down the road.”

Preparatory work on the Frick’s renovation is to begin this fall, with construction starting in the first quarter of 2021. The Whitney has yet to announce its plans for the Breuer building after the Frick departs in 2023.

The environment of the Breuer prompted the Met — which moved out on Aug. 31 — to juxtapose historical works of art with contemporary works, a possibility the Frick said it may consider. Perhaps more important, the Frick hopes the temporary space will attract new, younger audiences as well as encouraging loyalists to see the collection in a new light.

“I hope it’s going to be a chance for people who know the Frick well,” Mr. Salomon said, “to be able to say, ‘Oh, I never noticed that before.’”