‘For Those I Love’ Sets Sad Stories to Electronic Beats

David Balfe feels guilty. The Irish musician’s debut album “For Those I Love,” which he recorded under the same name, has had the kind of success most artists only dream of: It has won widespread critical praise and was only beaten to the number one spot in the Irish album charts by Justin Bieber.

But the record wasn’t made for public release, and Balfe said he feels uncomfortable receiving recognition for an album about his working-class Dublin childhood and a friend’s recent death.

“I seem to have benefited from the release of these difficult and deeply personal stories,” Balfe, 29, said in a recent video interview. “It’s a little bit out of my control now.”

He described the album — which depicts gang violence, poverty and substance addiction — as “storytelling set against a backdrop of electronica.” Its lyrics mix reminiscences of all-night parties with Balfe’s close circle of friends with indictments of wealth inequality in Ireland — a country where both house prices and homelessness rates have surged in recent years.

Balfe grew up in the North Dublin suburb of Donaghmede, but went to school and had family and friends in nearby Coolock, where crime levels were rising throughout his teenage years. “I emerged at a young age into quite a violent backdrop and aggressive place,” he said. To survive there, he added, “I needed to learn a coldness.”

On the album, Balfe explores death, grief and inequality in Dublin, which he said were all “intrinsically linked.” On one track, “Birthday/The Pain,” he recalls a homeless man who was murdered on the street where he lived when he was six.

Balfe said he was “struck by the universal acceptance of a record that is so descriptive of a very specific piece of geography,” adding that he was surprised to see the “minutiae of a world that I grew up in resonating with people from a world so far from mine.”

Balfe’s best friend, Paul Curran, played a key role in many of the stories told on “For Those I Love.” They met in high school, and Curran went on to become a popular spoken word artist, writing and performing work about everything from politics to soccer.

At Chanel College, in Coolock, the two discovered music in lunchtime guitar jam sessions organized by an English teacher, Mick Phelan. “David and Paul were non-judgemental,” Phelan said of Balfe and Curran in a video interview. “They had their friends, but they talked to everyone. I saw a humanity and a maturity in them that I don’t often see in teenage lads.”

After graduating, Balfe and Curran continued making music and art together: first in a hard-core band called Plagues; later, as part of Burnt Out, a collective that made audiovisual works that addressed youth unemployment in Coolock, which was running at around 25 percent in Ireland at the time.

Balfe returned to the problems of Dublin’s suburbs in 2017, when he began “For Those I Love,” layering vocals over a solo instrumental project he put together in his mother’s garden shed. He brought his own voice — half-sung, half-spoken, in a strong Irish brogue — to the sample-heavy dance music he had written, mixing in snippets of WhatsApp voice notes and spoken word work by Curran.

The tracks were made to share with his closest friends and his family, he said: “A document of love and thanks for the sacrifices they made.” 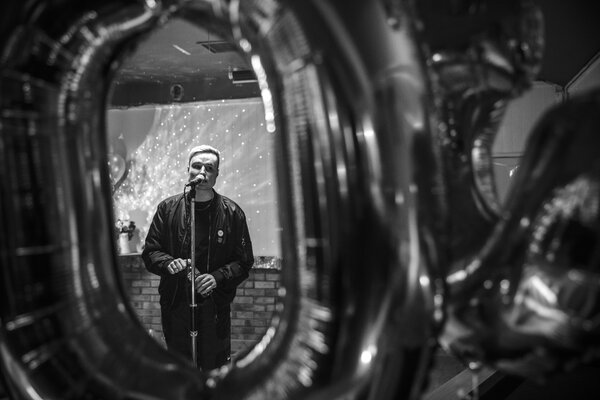 But in February 2018, Paul Curran died by suicide and Balfe, grief-stricken, put “For Those I Love” on pause. The next few months were “a thundering whirlwind of chaos,” he said, that felt like “a day and a decade in one.”

“In the shadow of grief, all of us were very different people,” he said. “It’s very easy to believe that you might never be creative again.”

Balfe’s return to writing music was the “first step in the recovery” after Curran’s death, he added. Some of the material, like the opening track “I Have A Love,” was rewritten completely, changing from an ode to his group of friends to a eulogy to Curran; nostalgic new songs, such as “You Stayed,” were added.

“It was very much a mode of self expression and survival at the time,” Balfe said.

When “For Those I Love” was finished, in May 2019, Balfe put it on the independent music platform Bandcamp, to share with family and friends. A few Irish music blogs found it, too, and the record received some favorable reviews. But Balfe’s fortunes really changed when “For Those I Love” came to the attention of Ash Houghton, an A & R manager at September Recordings, which also represents Adele and London Grammar.

“The album speaks for itself,” Houghton said in an email. “My only thought at the time was that it would be a tragedy if more people weren’t able to hear it.”

Houghton offered a release on the label, yet Balfe initially was hesitant to share such personal work with a wider audience, he said. But friends who had also known Curran suggested the album could help others, he said, “and speak to them as they move through their own grief.”

In March, September Recordings rereleased “For Those I Love,” which entered the Irish album charts at number two, and Balfe’s debut live show in Dublin, scheduled for October, sold out in 10 minutes.

Niall Byrne, the editor of Nialler9.com, an Irish music site that was one of the album’s early champions, said in a video interview that, while many Irish musicians were producing good music, “you don’t hear a lot of rawness.” It was this quality, he added, that set Balfe’s record apart.

A recent wave of new artists, he said — including Balfe, the group Pillow Queens and the post-punk band The Murder Capital — were “less defined by genre or sound,” but rather “by the sensibility and values their music holds. Their lyrics are informed by real issues.”

Balfe said he was working on a new album, that would also be informed by Dublin and its politics, but that the project had hit a “frustratingly stagnant brick wall.” Despite “For Those I Love’s” success, he was still working “a day job,” he said — though he didn’t want to say what that was. He kept the job, which he had before signing the record deal, out of “fear of turning the thing that I love the most, the creative pursuits, into labor,” he said.

Since the wider release of “For Those I Love,” Balfe said, fans had been messaging him on social media, to share how the record has “helped them shake their grief.”

He still mourns Curran, he said: “A semi-successful local record isn’t going to make that better.” But, he added, he was happy that his music has touched others. “Those responses,” he said, “have gone a long way to help with some of the guilt.”