Home » Entertainment » For Christopher Walken and John Turturro, ‘Severance’ Is a Workplace Romance

The actors, both nominated for Emmys for best supporting actor in a drama, drew upon their years of friendship in the Apple TV+ techno-thriller.

Voting is underway for the 74th Primetime Emmys, and this week we’re talking to several acting nominees. The awards will be presented on Sept. 12 on NBC.

“I’ve hardly ever played the guy who gets the girl. Or the guy,” Christopher Walken said. “Romantic, that’s not it. Usually I chop people up or something.”

This was on a recent weekday morning, on a video call between Walken and his longtime friend John Turturro. In “Severance,” an Apple TV+ series that earned 14 nominations for its first season, Walken and Turturro play Burt and Irving, colleagues at a sinister megacorporation called Lumon Industries. (A few spoilers for the first season follow.) To work at Lumon, employees must volunteer for “severance,” a surgical procedure that bifurcates the mind so that the work self — the “innie”— has no knowledge of the home self — the “outie” — and vice versa.

The company maintains strict divisions between departments, and romantic fraternization is discouraged. But Walken’s Burt, who belongs to the Optics and Design department, and Turturro’s Irving, who works in Macrodata Refinement, somehow find their way to each other in a series of aching, slow-burn scenes that earned each actor an Emmy nomination.

In the sixth episode, the two men meet in what looks like a greenhouse. They speak softly, their faces and bodies coming closer. They very nearly kiss, until Irving reminds him about the company’s stance on workplace relationships. “This can’t be romantic then?” Burt asks. “Not romantic at all?” A lifetime of yearning — two lifetimes — is concentrated into these few seconds.

Did the actors ever try the scene with a kiss? They did not. “Because I’m so old, it would have been a little bit hard to watch,” Walken said.

While they may have met at a Yale School of Drama party in the early ’80s — they don’t remember for sure — Walken, 79, and Turturro, 65, didn’t work together until the 1995 showbiz satire “Search and Destroy.” (“Hollow, but crazily arresting,” the New York Times critic wrote.) Turturro went on to hire Walken for three of the movies he directed: “Illuminata,” “Romance & Cigarettes” and “The Jesus Rolls.”

They don’t socialize outside of work often. (Walken blamed himself: “I live in a kind of isolated way,” he said.) But they always look forward to sharing a camera setup, even a video call, during which they displayed mutual respect and affection.

“I’m a fan of Chris’s,” Turturro explained. He was dressed in a white T-shirt, his face and shoulders filling the screen. “We get along and we share a sense of humor.”

“We have fun,” Walken confirmed. He was seated further from the camera and dressed all in black. (“How are you doing, Elvis?” Turturro had greeted him.)

More on the 74th Emmy Awards

The 2022 edition of the Emmys, which celebrate excellence in television, will take place on Sept. 12 at the Microsoft Theater in Los Angeles.

Turturro was hired onto “Severance” first. He read the initial scripts, and when he met with Dan Erickson, the series’s creator, and Ben Stiller, a director and executive producer, he suggested Walken for Burt. They knew and liked each other, he explained, so they wouldn’t have to struggle to create chemistry. Stiller agreed.

“I immediately said yes,” Stiller wrote in an email. “Because I’m not crazy.”

“Severance” shot on location in upstate New York, before Covid-19 vaccines were available. Even in more ideal circumstances, participating in a long shoot is a little like being severed — it cuts actors off from their personal lives.

“I’ve been in so many hotel rooms; I have so much stationery,” Turturro said. “It can be wearing that way.” 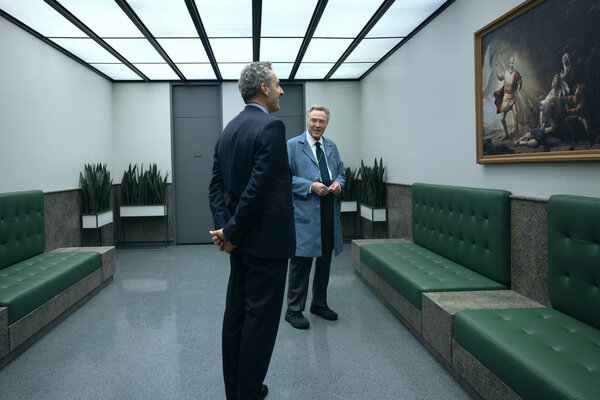 The “Severance” set was close enough for both men to sleep in their own homes most nights. Because of Covid-19 precautions, Walken and Turturro spent most of their work days in masks and face shields, negotiating a labyrinthine set that Walken described as the biggest he had ever seen. “I used to get lost,” he said.

So when they could film with each other, in small rooms, without masks, it felt like a respite. Each took comfort in the other, sharing banana bread that Turturro’s wife, the actress Katherine Borowitz, had baked. Between takes, they often chatted.

“People think that actors talk about motivation and acting,” Walken said. “Mostly they talk about cooking, movies and sometimes girls.”

Turturro had wanted to turn these conversations into a book, “Talkin’ and Walken.” But Walken killed the idea. He didn’t want to hurt the feelings of anyone still living.

Once the cameras were on, neither had to work very hard to summon the love between Irving and Burt.

“If you can put them in a frame together and allow them to react and dictate their own rhythms, it’s really beautiful to watch,” Stiller wrote.

What explains that ease? Turturro pointed to a similarity of style. “Chris is not a ‘head’ actor — you feel his body in the scene,” he said. “I like to use my body, too, so I think it’s a good match.”

Walken put it a little more sentimentally. “When people are acting together, you can tell when they know each other, and particularly if they like each other and are comfortable together,” Walken said. “It’s a kind of unspoken thing, but it really shows up. It’s what they call chemistry, I suppose.”

Neither actor spent much time thinking about Burt’s and Irving’s lives outside of Lumon. But they like to think that Burt and Irving would get along outside of work. That they might visit museums, attend the opera.

And what about Burt’s outie husband? They think that he would understand.

They don’t know what the planned second season of “Severance”will mean for these characters or if Burt, who retired from Lumon, will even appear at all. They hope that the relationship will continue, though Walken quashed the idea of any sex scene.

“I always think, would I want to watch this?” he said. “No, so no full frontal.”

They riffed for a while on the idea of Burt and Irving taking a road trip.

“It would take a long time if we went cross country,” Turturro said. “Stopping for bathroom breaks.”

“And the police would keep stopping us for driving too slow,” Walken added.

Would either actor want to experience severance? Turturro sounded unenthusiastic, but Walken didn’t hate the idea.

“I’m a hit-and-miss actor,” he said. “I’m not sure I’ve ever made a movie where I was good enough in the whole thing. So I’d get rid of a lot of stuff if I could.”

Through the screen, Turturro shook his head and gave a coughing kind of laugh. “I think you’re fantastic,” he said.

Umm, Can I Use My Retinol and Vitamin C Together?!
Entertainment