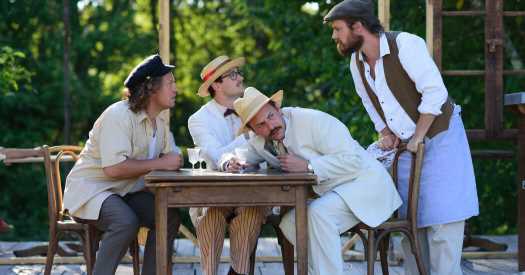 MAURENS, France — The village of Maurens, 300 miles south of Paris, has a population of around 1,000. It has a church; a single bakery; and, since 2013, a summer theater festival, the Théâtre du Roi de Coeur.

One recent evening, the scale of the event’s ambition was obvious. On an open-air wooden stage, a cast of 12 put impressive energy into “Fanny, Me and the Others,” a four-hour adaptation of a Marcel Pagnol trilogy. Even when a drizzle started, the members of audience, sitting on chairs and haystacks, opened their umbrellas and stayed put.

The Roi de Coeur isn’t alone in bringing large-scale theater to rural backyards. It is one of 17 founding members of France’s Federation of Local Festivals and Theaters, which got underway last month at the Avignon Festival. Its members, dotted around the country in areas with few playhouses, have come together to show that rural theater can compete with bigger city stages, and to push for greater recognition of their contribution to France’s cultural ecosystem.

Behind the initiative is a group of millennials, who graduated from top drama schools and found themselves frustrated with the rigid structure of France’s theater world. While the performing arts in the country receive generous public funding, a significant portion goes to state-backed playhouses in large cities. Competition to get independent projects off the ground is fierce; young artists have complained for years about the cost of attending the crowded Avignon Fringe, for instance.

Chloé de Broca, who started the Roi de Coeur with Félix Beaupérin, said they were warned as students about the profession’s harsh reality. “We knew very quickly that big productions with a large cast were reserved to an elite of sorts,” she said.

Unaware of one another at first, the federation’s members carved an alternative path, turning to “spaces not originally meant for theater,” as their official charter puts it. These include gardens, forests, private residences and public squares. The Roi de Coeur’s two stages are installed every year on the property of de Broca’s sister-in-law.

Other festivals tour small cities and villages. La Luzège, which is based just east of the Roi de Coeur, stages productions in different venues every night from mid-July to mid-August. Theater doesn’t get much more adaptable than that. Last week, because of the rain, La Luzège moved “Bon Appétit, Messieurs!,” a show inspired by Victor Hugo’s writings, from a garden to a nearby community center with five minutes’ notice.

With its focus on underserved rural communities, the federation is finding new audiences. The first wave of cultural decentralization in France, initiated by postwar governments, aimed to break Paris’s stranglehold on artistic life and redirected funding to midsize cities — but often stopped there. “This is a new decentralization. We’re reaching people where they are,” said Romane Ponty-Bésanger, one of La Luzège’s co-directors.

Some locals are delighted. Séverine Bonnier, who co-owns a bed-and-breakfast, Ô Vents d’Anges, in Maurens, saw all four of the Roi de Coeur’s productions this year; they were the first performances she’d seen since moving to the area a few years ago, she said. “It’s a matter of time, between work and two children at home,” she added.

Some festivals in the federation focus on classic, family-friendly titles, while others stage contemporary plays. One common feature, however, is the absence of a single artistic director: Most operate as collectives. There are four co-directors at La Luzège, and de Broca and Beaupérin make decisions with six others at the Roi de Coeur. Roles are fluid, too. Actors might direct, or help with sets, costumes and other tasks, like tending bar. Nicolas Grosrichard (César in “Fanny, Me and the Others”) wrote a witty short play for children this year, “Anne the Pirate.”

They also work fast. While the traditional funding model for independent French theatermakers allows for one creation every other year, most of the federation’s members put together between three and six productions every 12 months. Rehearsal time is limited, and finesse sometimes sacrificed. In the case of “Fanny, Marius and the Others,” conflicts between characters turned into shouting matches, without the nuance more preparation might have afforded.

“We’re looking for diversity and spontaneity,” de Broca said. “It’s almost unfinished theater, but it makes it even more alive. The artists are sharing their research with the audience, and people really respond to that.”

The Nouveau Théâtre Populaire, founded in the Loire village of Fontaine-Guérin in 2009 and run by an 18-member collective, has become the blueprint for this new generation of local festivals. (The Roi de Coeur was modeled on it, de Broca said.)

It began when the grandmother of an actor, Lazare Herson-Macarel, allowed the organizers to take over her backyard. After her death in 2012, a crowdfunding campaign raised 70,000 euros, about $82,000, to keep the festival going on her property, and the local authorities opted to buy it and lease it without charge to the collective.

The festival’s audience has kept growing, and in 2019, before the pandemic, it attracted around 10,000 visitors. Last month, it achieved a different milestone when the Avignon Festival, the most prestigious event in French theater, featured one of its productions, “The Sky, the Night and the Party,” a six-hour trilogy of Molière plays. The three plays will alternate this month in Fontaine-Guérin.

The theater establishment may be waking up to the vitality of rural festivals, but there is still a long way to go, the federation’s members say. Economically, festivals remain fragile, especially during the pandemic, and they often fall outside the criteria for local and regional funding. “Performances in rural settings aren’t recognized as ‘real’ performances, because they don’t take place in identified venues,” Pauline Bolcatto, a member of the Nouveau Théâtre Populaire and one of the federation’s architects, said in a phone interview.

This summer, the federation’s members exchanged tips and information, Bolcatto said, and discussed how best to implement France’s new health pass, a government policy that requires businesses and event organizers to check proof of vaccination or a negative coronavirus test before admitting patrons.

The noise generated by daily outdoor performances hasn’t been to everyone’s taste in quiet countryside spots. In 2019, the Nouveau Théâtre Populaire had to fight a lawsuit initiated by a neighbor; rulings so far have been in the troupe’s favor. The Roi du Coeur also faced complaints, and found a compromise: The festival will continue in its current form until the tenth edition, in 2023, and will then move to a yet-to-be-decided location.

Still, a chance visit may open unexpected doors. Étienne Fraday, who played the leading role of Césario in “Fanny, Me and the Others,” was working as a boilermaker when he fell in love with the Roi de Coeur in 2016. After being a volunteer for two years, he decided to retrain as an actor, and is currently studying at the prestigious Court Florent in Paris.

“This adventure has changed some lives,” de Broca said.

Jadakiss Responds to Tyler, The Creator Revealing a Crush on Him: ‘I Like’ Him
Entertainment