Warning: This article is dark and full of Game of Thrones season 8 spoilers.

Emilia Clarke has been warning viewers about the Game of Thrones series finale for a while now. We can’t imagine how she feels — after nearly a decade playing the iconic Daenerys Targaryen, Clarke’s character took one of the most dramatic turns in recent television history. And given the GoT fanbase’s tendency for violent reactions toward plot twists they don’t like, Clarke had every reason to fear how they’d react to Dany’s sudden shift to a “fire and blood” mentality. Finally, Clarke had to make peace with Dany’s death at the hand of Jon Snow, a fate many predicted but few hoped would come to pass. During GoT season 8 shooting last spring, Clarke sat down with Entertainment Weekly and talked through her reaction to Dany’s fate: the good, the bad, and the “flabbergasted.” 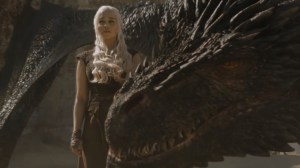 When Clarke first read the season 8 script, her reaction was simple: “never saw that coming.” The actress recalls leaving her house and walking, aimlessly, for hours: “How am I going to do this?” she asked herself. The reaction was not just to Dany’s decision to torch King’s Landing, killing thousands and — seemingly — deviating from the message of mercy she’d ruled under for the previous seven years. She was devastated, perhaps mainly, that Jon was the one to kill Dany, and so suddenly. In Clarke’s mind, Jon was the final thing tethering Dany to a place of sanity, perhaps the only thing that could have saved her.

“One by one, you see all these strings being cut,” Clarke recounts, calling out the challenges Dany faced in season 8. There’s “so much she’s seen and witnessed and been through and lost and suffered and hurt. Suddenly these people are turning around and saying, ‘We don’t accept you.’ But she’s too far down the line. She’s killed so many people already. I can’t turn this ship around. It’s too much.” At that point, Clarke explains, Dany simply snaps — “her greatest plans” are right there in front of her, she’s lost her closest advisors, and she doesn’t have room for a more nuanced reaction than this: “‘’I don’t give a s—t.’ This is my whole existence.”

As for Jon’s final betrayal: Clarke thinks of Jon as “this last thread [Dany is] holding onto. There’s this boy. And she thinks, ‘He loves me, and I think that’s enough.’ But is it enough? Is it? And it’s just that hope and wishing that finally there is someone who accepts her for everything she is and … he f—king doesn’t.” This, for Clarke, is the real tragedy of her character: her whole life she’s been betrayed by people around her, no one understanding the magnitude of the fate cut out for her. “Hopefully, what you’ll see in that last moment as she’s dying is: There’s the vulnerability,” the actress shares of Dany’s final moment. “There’s the little girl you met in season 1. See? She’s right there. And now, she’s not there anymore…”

Ultimately, while Clarke worried about people’s reactions to Dany’s turn in season 8, it seems she wouldn’t have it any other way. “I stand by Daenerys. I stand by her! I can’t not,” she exclaims. After all, how else could the Mother of Dragons really live out her days? “It’s not like she’s suddenly going to go, ‘Okay, I’m gonna put a kettle on and put cookies in the oven and we’ll just sit down and have a lovely time and pop a few kids out,’” Clarke says. (Honestly, can you imagine?) “That was never going to happen. She’s a Targaryen.”

For better or for worse, that’s how Dany will be remembered. If Clarke can live with it, we can too.

Tori Roloff: This Pregnancy is SO Much Harder than Last Time!