Miami Art Week is the most densely packed event on the art world calendar. At the center of the week’s festivities each year is Art Basel Miami Beach, which celebrates its 18th edition this month with a roster of 269 international galleries. Satellite fairs include NADA, Untitled, Design Miami, Pinta and Pulse, and, of course, there are the city’s private and public museums, such as Rubell Family Collection, the Bass and Pérez Art Museum Miami (PAMM), which will open their most anticipated shows of the year. With so much to see, there’s always a risk of missing something. Here are eight highlights to put on your list.

The Main Fair Expands Beyond Its Booths

New to Art Basel Miami Beach this year is Meridians, a vast installation space which will expand the fair’s reach by taking over the convention center’s new 60,374-square-foot ballroom. On view there will be large-scale sculpture, painting, installation, film and performance work organized by the curator Magalí Arriola, who is committed to bringing various disciplines together under one roof. Pace Gallery joins the party with “Sala Longhi,” an installation of the American artist Fred Wilson’s 27 Murano glass paintings — from which ornate chandeliers protrude — originally commissioned for the U.S. pavilion at the 2011 Venice Biennale. Meanwhile, P.P.O.W. invites visitors into a restaging of the American artist Portia Munson’s 1996 installation “The Garden,” which depicts a woman’s bedroom packed to an uncanny degree with (mainly pink) objects associated with traditional notions of femininity. A more subtle yet equally captivating presentation, from Galerie Lelong & Co., is the late Cuban-American artist Ana Mendieta’s poignant “Untitled (1981),” a two-and-a-half-minute black-and-white video of a sand figure she sculpted on the beach in her hometown Guanabo, Cuba, to which she returned in the early ’80s after a 20-year exile in the United States. Art Basel Miami Beach is open to the public from Dec. 5 through Dec. 8, 2019, at Miami Beach Convention Center, 1901 Convention Center Drive, Miami Beach, Fla., 33139, artbasel.com/miami-beach.

A Showcase of Georgian Design

Each year, Design Miami, which takes place in a venue adjacent to the Miami Beach Convention Center, explores the boundary between art and design. This time, look out for Rooms, a studio founded by Nata Janberidze and Keti Toloraia in Tbilisi, Georgia, in 2007. The designers, both 38, filter their Soviet-era upbringing through a contemporary lens, creating minimalist furniture and home objects, sometimes with surrealist details, from wood, metal or concrete. “We are focusing on our personal experiences and listening to ourselves, while also trying to understand and explore the outer world,” Toloraia and Janberidze wrote in an email. For their Design Miami debut, the pair will unveil “In Circulation,” an arrangement of wooden bus-stop-like benches that fair goers can carve names or personal messages into, an exploration of the idea of ownership. The designers will also honor their country’s long history as a passage between Eurasia and Eastern Europe with a series of repurposed Georgian objects — including an iron chandelier, a stone carved supra coffee table and a deformed oak chess table with pieces from different eras — in an attempt to “give a second life to our native unknown, underappreciated or forgotten artisans’ primitive artworks.” Design Miami is open to the public from Dec. 4 through Dec. 8, 2019, at Convention Center Drive between 18th and 19th Streets, Miami Beach, Fla., 33139, miami2019.designmiami.com. 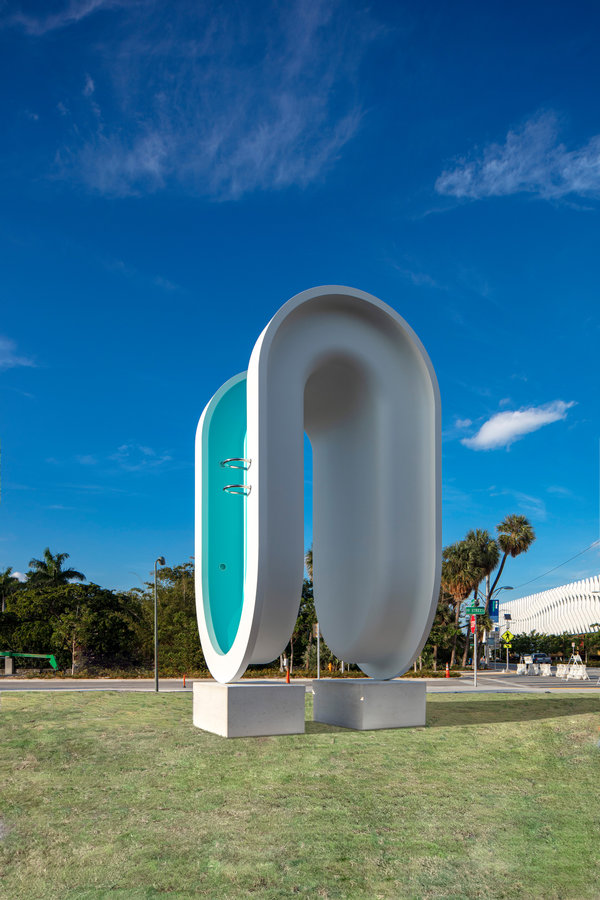 A Tribute to Miami’s Queer Culture

Pools are ubiquitous in Miami, so it’s somewhat surprising that the city is only now receiving a sculpture by the Scandinavian artists Michael Elmgreen and Ingar Dragset, known as Elmgreen & Dragset — the duo often explores these contained bodies of water as tokens of desire, excess and mystery. “Bent Pool” (2019), on display in Miami’s newly completed Pride Park, is an (unfilled) oval pool — complete with lights and a chrome ladder — contorted into an elongated arch through which a single viewer can walk. The work’s location is particularly important to Elmgreen & Dragset. “The park is named in acknowledgment of the gay community’s historical contribution to the cultural fabric of Miami Beach,” the artists told T in an email. “When gay culture was suppressed in other parts of society, it found a way to flourish around pools, not least the public ones.” Since they began their collaboration in the mid-90s, Elmgreen & Dragset have placed similar works in an array of settings, including Rockefeller Center in New York and the pier of the East Asiatic Building during the 2018 Bangkok Art Biennale. Their first American survey, “Sculptures,” is currently on view at Dallas’s Nasher Sculpture Center. “Bent Pool” is open to the public at Pride Park, 1901 Convention Center Drive, Miami Beach, Fla., 33139, mbartsandculture.org.

A Traffic Jam on the Oceanfront

The Argentine conceptual artist Leandro Erlich has turned one of Miami’s most persistent nuisances, its traffic jams, into an impressive new public artwork. Erlich, known for his immersive installations, has taken over the oceanfront at Lincoln Road with “Order of Importance,” a work featuring 66 life-size sand sculptures of vehicles packed bumper-to-bumper along the beach. His eerily realistic stagings of mundane environments (other works have conjured elevators and hair salons) are designed to catch viewers off guard as they blur the line between art and everyday life. This monumental installation will remain on view through the first half of December, a month when, nowadays, the city rarely receives rain on account of climate change — a topic of import to Erlich. Organized by the curator Ximena Caminos and commissioned by the city of Miami Beach, the work is also meant as a humorous commentary on Miami’s seemingly idyllic beach culture. “Order of Importance” is open to the public through Dec. 15, 2019, at South Beach at Lincoln Road, Miami, Fla., miamiandbeaches.com.

The work of the New York-based artist Teresita Fernández engages with two of the most pressing issues of the day — environmental catastrophe and political instability — while also holding personal significance. She was born in Miami to exiled Cuban parents and embraces the city’s vibrant colors and rich textures in her art, which incorporates graphite, silk yarn, charcoal and, most famously, glazed ceramics. And so “Elemental,” her survey at PAMM, is something of a homecoming. “This is a city where 75 percent of the population speaks a language other than English at home and half were born in another country,” says Franklin Sirmans, the director of PAMM. “Fernández’s voice in the national conversation on the subject is pronounced.” The show spans from the mid ’90s, when Fernández completed an M.F.A. at Virginia Commonwealth University, to the present day. Two recent works, “Fire (America) 5” (2017), made in glazed ceramic, and “Fire (United States of the Americas) 3” (2017-19), painted in charcoal, feel especially timely, with their renditions of America as a hopeful but haunting panorama. As Sirmans says, her scenes “are clearly positioned as American landscapes, reminding us of the here and now.” “Teresita Fernández: Elemental” is on view until Feb. 9, 2020, at the Pérez Art Museum Miami, 1103 Biscayne Boulevard, Miami, Fla., 33132, pamm.org.

Two of the week’s standout projects explore the intersection of art and fashion. The Russian-born designer Harry Nuriev, who makes brightly colored powder-coated steel furniture through his firm Crosby Studios, has collaborated with one of Paris’s most esteemed houses to create “Balenciaga Sofa,” an L-shaped couch, on view at Design Miami, that’s covered in transparent vinyl and stuffed with the brand’s discarded fabric scraps. “I’ve never been able to get Balenciaga’s look out of my head — how they’ve integrated subversive and experimental designs with the house’s signature forms,” says Nuriev. Meanwhile, the fashion designer Thom Browne, who has long flirted with installation and performance art in his theatrical runway shows, debuts his first public artwork, “Palm Tree I” (2019), at the Moore Building. Browne has made minimalist pointillist paintings for over seven years now, but this is his largest artistic statement to date. The 21-foot-tall sculpture — made from pastel-hued seersucker, corduroy and gingham oxford fabrics also used in his clothes — is shaped like a palm tree, a fitting homage to Miami. Design Miami is open to the public between Dec. 4 and Dec. 8, 2019, at Convention Center Drive between 18th and 19th Streets, Miami Beach, Fla., 33139, miami2019.designmiami.com. “Thom Browne: Palm Tree I” opens on Dec. 5 at the Moore Building, 191 NE 40th Street, Miami, Fla., 33137.

Mickalene Thomas, who works at the intersection of photography and painting, is one of America’s most prolific and important artists. Her latest project, a vivid celebration of black legacy and familial ties, transformed the entire ground floor of the Bass into a reinterpretation of her childhood living room, where throughout the 1970s and ’80s, Thomas’s mother threw parties to fund-raise for her and her friends’ theater projects. This restaging, titled “Better Nights,” is composed of two adjoining rooms and a hallway decorated with furniture that contains elements of Thomas’s signature visual language (wood paneling, floral upholstery and patterned wallpaper) as well as carefully chosen works by artists of color such as Nina Chanel Abney, David Antonio Cruz, Lyle Ashton Harris, Paul Mpagi Sepuya and Alexandria Smith. The space will also host live performances and concerts by musicians including Jody Watley, Meshell Ndegeocello, Quiñ, Mashonda Tifrere and Devin Tracy (the artist Derrick Adams will also do a nightly D.J. set from Dec. 4-6). “Mickalene Thomas: Better Nights” is open through Sept. 27, 2020, at the Bass, at 2100 Collins Avenue, Miami Beach, Fla., 33139 thebass.org.

An Artist Listens to the Ocean

The climate crisis, which stands to affect Miami’s waterfront in particular, is a recurring theme at this year’s fair. The Norwegian artist Jana Winderen’s new work “The Art of Listening: Under Water” is a site-specific installation of sound that attempts to raise consciousness about human intervention in the oceans. At the Rotunda in Collins Park, Winderen will immerse audiences in a soothing aquatic symphony occasionally marred by human-made noises, but mostly composed of more natural sounds she recorded in Miami Beach and the Caribbean; the 22-minute audio work, commissioned by Audemars Piguet, asks fairgoers to stop and listen to things that may feel far away but are, in fact, just outside. “Jana Winderen: The Art of Listening: Under Water” is open through Dec. 8, 2019, at 2100 Collins Avenue, Miami Beach, Fla., 33140, audemarspiguet.com.

118 Stars Who Use a Stage Name