Edward Burns has carved a distinctive path as an indie filmmaker in the quarter-century since he made a splash with his debut, “The Brothers McMullen.” He has consistently made movies for small ($250,000 for “Looking for Kitty”) to minuscule ($9,000 — yes, you read that right — for “Newlyweds”) budgets, and was experimenting with new distribution models even before the rise of streaming. In 2007, he made the first straight-to-iTunes movie, “Purple Violets,” and in 2010 he inaugurated Comcast’s straight-to-VOD Indie Film Club with “Nice Guy Johnny.”

Now, he sees a bright future for indie filmmakers — “I don’t know if you can call us that anymore, but we’re independent-minded storytellers” — in streaming and premium cable.

“These are the perfect platforms, and it’s one of the most encouraging times for someone with a story to tell,” Burns said.

While he previously ventured into broadcast and basic cable television for short-lived series like “Public Morals,” his new dramedy “Bridge and Tunnel,” premiering Sunday on Epix, marks his entry into premium cable. 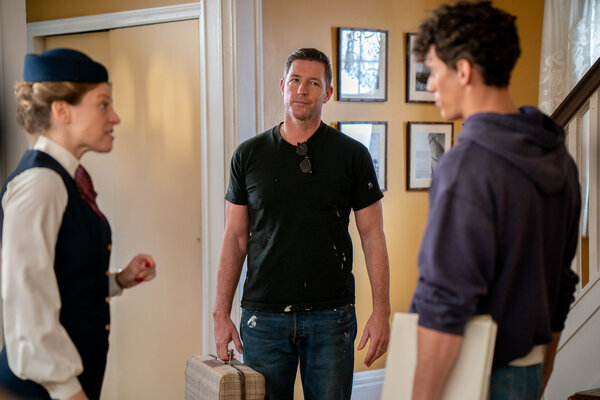 Burns said the Epix was looking for “a half-hour show full of promise and joy” as a departure from the darker themes of many prestige TV series. His tonal model for “Bridge and Tunnel” were the early Beatles hits that “put a smile on your face without being cornball-ish,” he added. “We do need that now.”

Set in 1980 in Valley Stream, N.Y., the Long Island town where Burns grew up, the show revolves around six recent college graduates as they try to figure out their futures. “That period when you’ve been away for four years and you’re back in your house with your parents — for some people it’s a week, for some it’s a couple of years — and you’re not quite an adult, but no longer a kid, is really interesting to me,” Burns said.

Burns, who also plays the father of Jimmy (Sam Vartholomeos), an aspiring photographer, includes plenty of period flourishes. A poster of the Mets fan favorite Rusty Staub can be glimpsed on the wall of Jimmy’s childhood room, and Burns lent his own vintage 1960s Mets jersey to Brian Muller, who plays Pags. One character makes a commercial that’s an homage to the pitchman Crazy Eddie, a New York TV fixture in the ’80s; if there’s a second season, Burns hopes to have another character appear in one of the Milford Plaza Hotel “Lullaby of Broadway” ads that ran endlessly back then.

Burns recently spoke by phone about “Bridge and Tunnel” and what he had to do to keep it alive during the pandemic. (The show was shot on Long Island last summer and fall.) These are edited excerpts from the conversation.

As a Mets fan, I loved the snippet of a game with Bob Murphy announcing, but why not make this 1984 so we see Dwight Gooden pitching, instead of a Met fouling out?

I settled on the summer of 1980 because it’s the era in New York I’m most nostalgic about. People talk about Paris in the 1920s — I always thought about New York in the early ’80s. You have punk, new wave, hip-hop, the art and fashion scene. When I finally come into Manhattan in ’90, ’91, you look back and say, “Oh man, it had to be so much cooler then.”

I’m 52, so in 1980 I’m in sixth grade and at my most impressionable. I romanticized the lives and escapades of the older guys and girls in my neighborhood — I could only imagine what they were doing when they were walking down my street to the train station on a Friday or Saturday night, going into the city to do their thing.

I fell in love with the idea of these bridge and tunnel kids who make their journey into Manhattan to pursue their dreams. It’s the Scott Fitzgerald line about the city and “its wild promise.” I gave each character a dream that for a working class kid really seems out of touch — I didn’t know anyone who was in the arts, in fashion or photography, so it felt like an impossible dream for my friends who had artistic ambitions. But you also felt if you could get into Manhattan, you could make your dreams happen.

I also wanted to embrace how we communicated before we were locked to our phones and had access to the entire world through social media. I loved those simple pleasures — the great nights were sitting on your car on your street corner having a couple of beers, or hanging with your dad in the backyard and watching the Mets, which, admittedly, in 1980 wouldn’t be a great night.

There’s a vintage soundtrack, with bands ranging from Toto to Blondie, and music is a constant topic of conversation. But why no mention of Billy Joel, the ultimate Long Island star? “Glass Houses” was a number one album in 1980.

As a young guy, I once saw Billy Joel outside a pizza place and when he got into his car, my friends and I followed him. So I’m keeping Billy Joel and that scene in my back pocket for Season 2.

Pags, who loves Styx, gets belittled by his sister, a huge Clash fan. Did you worry you were stacking the deck too much in her favor?

I have a soft spot in my heart for Styx. “Paradise Theatre” came out when I was in eighth grade — if you were in 10th grade maybe you said, “Absolutely not,” but for us it was a big album. I still know guys who are so pissed that Styx is not in the Rock & Roll Hall of Fame, they are completely blinded by their love for the band. I wanted Pags to represent those true Styx fans.

Your characters are working class but mostly went to college and have bigger ambitions. Class isn’t an explicit issue, although Jill (Caitlin Stasey) is belittled for her accent by her snooty Manhattan bosses, but you underscore how things were different.

I think it’s tougher for working class kids today to pursue their dreams. I was able to go to Hunter College at $600 a semester and take film classes. The barrier to entry to some of those fields is tougher now. Tammy (Gigi Zumbado) is going to Columbia Business School and is paying for it with her waitressing job, but today I don’t think that would be enough to make it realistic.

You were set to make the series and then the pandemic happened, and Covid protocols like constant testing and deep cleaning cost $2 million, a big chunk of your budget. Did your background as an indie filmmaker help prepare you for this?

I’ve made so many no-budget and low-budget movies — you have to be able to think on your feet, to rewrite a scene on a moment’s notice, tear up your plans for the day when you lose an actor or when the cops show up and say, “Hey you don’t have a permit.”

If I do have a strength as a filmmaker, it’s my ability to pivot. They said with the $2 million they didn’t think we could do the series. I said, “I can reimagine this show.” We were originally doing eight episodes and half the show took place in Manhattan — we’d see characters coming out of an interview or meeting in a bar there.

I said I’d cut it to six episodes and rewrite everything to take place on the block where they grew up. I moved as many interior scenes as possible to exterior locations for safety, which is why they’re always in the park or hanging in the backyard.

Early in your career you cast rising stars like Connie Britton, Leslie Mann, Cameron Diaz and Amanda Peet. Was it fun looking for new faces again?

Definitely. We didn’t need name recognition so I said “Let’s find the best actors, but look for the kids who keep losing out to the more well-known actors.” Like a ballplayer in Triple A who’s ready and just needs someone to take a chance on him.

Sam Vartholomeos is from Astoria and still lives in Queens. When he came in, he said in auditions it always came down to him and another guy and he’d lose out. But I knew he was the real deal.

He went to LaGuardia High School and he’d had a teacher saying, “You’ve got to get rid of that Queens accent.” He was really concerned and was working on it until another teacher said, “Don’t worry so much — plenty of actors work with an accent. One day, hopefully, you’ll get to play Ed Burns’s son.”

At his first wardrobe fitting he asks whose playing his parents. When he was told I’m playing his dad, he says, “Get de [expletive] outta here. Are you kiddin’ me?”