Home » Entertainment » Donald Trump Was the Real Winner of ‘The Apprentice’ Donald Trump Was the Real Winner of ‘The Apprentice’

Donald J. Trump’s greatest success as a businessman, it turns out, was playing one on TV.

It’s always been obvious that hosting “The Apprentice” was crucial to the president’s eventual political fortunes. But as a Times investigation into more than two decades of his tax data details, the NBC reality show was also the better part of his actual fortune.

More than a decade after a business-near-death experience in which Mr. Trump’s debts collapsed on him, “The Apprentice” and its associated licensing deals earned him $427.4 million (which he would then largely sink into unprofitable businesses).

Making real money led to real tax bills that he took extraordinary measures to escape. The job even induced him to deduct more than $70,000 in hairstyling expenses, because as real estate developers know, gravity-defying architecture doesn’t come cheap.

But the series, in which Mr. Trump starred from 2004 until 2015, when he announced his campaign, was based on a carefully constructed, stage-managed pretense: that Mr. Trump was already on top of the world.

That’s where you see Mr. Trump in the show’s very first image. At least, he’s on top of Manhattan, soaring above the skyline in a helicopter with his name on the side. The greatest asset that Mr. Trump brought to the job was the ability, cultivated since the 1980s, to look like a fabulously wealthy man — complete with flashy props — even when this image, in reality, bobbed on an ocean of red ink.

Ironically, Mr. Trump’s first business meltdown provided the narrative back story for the show’s introduction. Sure, he admits, surveying Moneytown from his self-branded whirlybird, he’d been through rough times. But that was “about 13 years ago.” Then, he says, “I fought back and I won, big league.”

As visual evidence, the sequence machine-guns the viewer with jackpot imagery. It shows us Mr. Trump’s name on casinos, skyscrapers and bottles of water. He works the phones, shakes hands with men in suits, watches a model on the catwalk. He is, the montage tells us, a big shot who does big things. Why would you doubt it? Look at all that gold! Look at his name everywhere!

In fact, Mr. Trump had emerged from the early ’90s greatly diminished. His business had become more about lending his name, playing the celebrity mascot — a Cap’n Crunch of capitalism, embodying a cartoon image of wealth and glamour — in order to keep the brand’s value up.

Mr. Trump’s actual financial comeback hadn’t happened yet. In fact, viewers were watching it begin before their eyes. But on TV, he looked the part, and that was all that mattered.

Mark Burnett, the producer of “Survivor,” knew how to create visceral TV rich with image and symbol. For “The Apprentice” he cast Mr. Trump, by then a fixture of New York tabloids and sitcom cameos.

Mr. Burnett knew that a reality show about business doesn’t need an actual, boring business success. It needs someone who can perform the facsimile of success on camera. That had, for years, been Mr. Trump’s job.

Reality TV fans are a more skeptical lot than they get credit for. They are among the first to say that “reality TV” is an oxymoron; they look out for artifice, for deceptive editing, for reality stars who are playing it up for the cameras.

But the invaluable gift that “The Apprentice” gave Mr. Trump was to make his camera-burnished wealth the premise of the show. Contestants were competing to work for him, and that prize had to be worthwhile for the show to have any drama. 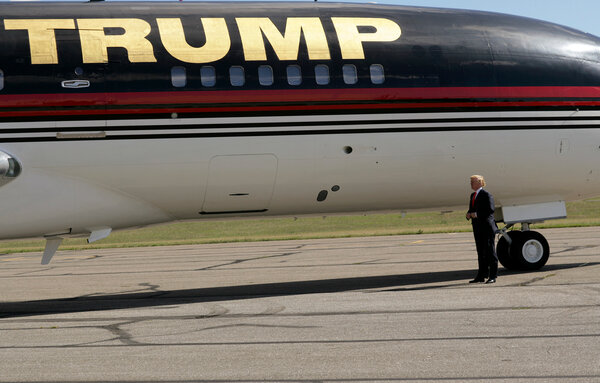 If “The Apprentice” was “Survivor” in the business world, then the Trump Organization was the island. You were not invited to question whether that island was merely a truckload of play sand.

The mythmaking went on for years, in millions of living rooms. It wasn’t just the boardroom — a stage set built in Trump Tower because Mr. Trump’s real offices were too shabby — in which he told unlucky applicants and celebrities, “You’re fired.” It was how the show depicted Mr. Trump as a businessman and made his holdings seem greater.

To a brass fanfare, he rides down a gleaming escalator at “his” Trump Taj Mahal casino, which had actually been part of a publicly traded company since a prepackaged bankruptcy in the early ’90s. He visits Trump Place, part of a massive development that he had in fact sold to Hong Kong billionaires, leaving his name on the buildings through a licensing agreement. (The name has since vanished as well.)

In reality, the show itself was by far Mr. Trump’s chief profit center. It gave him fame that he could monetize and an image that he could transfer to politics.

He began appearing in coverage of the 2008 election and of the financial collapse, because the most persuasive expert for TV is an expert from TV. Here’s Wolf Blitzer on CNN in September 2008: “You know Donald Trump has a lot of experience hiring an apprentice. I’m about to ask him to evaluate the vice-presidential choices of Obama and McCain.” (He criticized Barack Obama’s choice of Joseph R. Biden Jr., preferring Hillary Clinton, “a great friend.”)

Soon, he was on Fox News as a political talker. (“So what you’d say to Congress is, ‘You’re fired!’” Steve Doocy of “Fox and Friends” told him in 2010.) Given a weekly “Fox and Friends” segment in 2011, he blasted Mr. Obama’s administration and defended the racist fiction that the president was not born in the United States.

The conservative base audience loved him. Republican candidates courted him. He began talking up mysterious “polls” that urged him to run for president himself and … well, here we are.

As the Times investigation lays out, Mr. Trump would plow his “Apprentice” windfall into a string of money losers, reprising his disastrous, debt-enabled shopping spree of the 1980s.

But he kept something wildly valuable: the popular impression, echoing even now in polls that still give him an advantage on the economy, that whatever his personal or political deficits, he is at least a genuine big-time mogul who knows business.

He’s also benefited from media coverage that has framed him as a real estate developer first, celebrity second.

If Mr. Trump’s taxes leave some questions still unanswered — say, to whom the leader of a global superpower owes hundreds of millions of dollars — they prove that this framing is backward. Donald Trump is a TV star first, even in dollars-and-cents terms.

And in political and media terms, he’s the very definition of a celebrity: someone whose publicity investments paid off far more handsomely than his financial ones.