Home » Entertainment » Did I Need to Know What Gender My Nonbinary Interviewees Were Assigned at Birth? Maybe Not. Did I Need to Know What Gender My Nonbinary Interviewees Were Assigned at Birth? Maybe Not.

I knew certain things about Charley Fogel, the person I was interviewing a few weeks ago at a Starbucks in Bethesda, Md.

Their pronouns were they/them. They had adopted their gender-neutral name a few years ago, when they began to consciously identify as nonbinary — that is, neither male nor female. They were in their late 20s, working as an event planner, applying to graduate school. They favored adding an “X” gender option to the “M” and “F” on state IDs, the debates about which I had been reporting on for a recent front-page article. 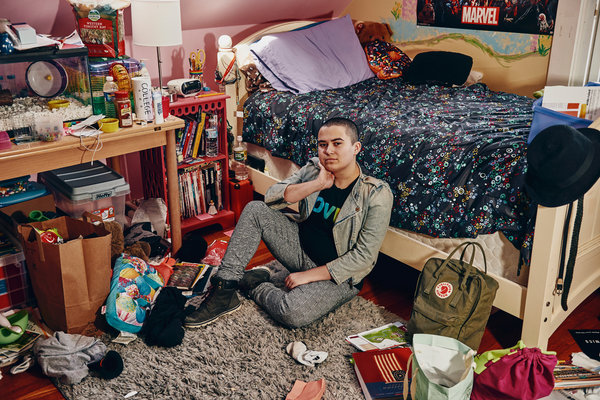 What I did not recall, I realized as I settled in across the table from them, was the gender they had been raised to express, the one that corresponded with the sex entered on their birth record.

It was in my notes. But I had interviewed a dozen nonbinary people by phone before traveling to Maryland, one of several states where “Gender X” legislation was under consideration. Some of the biographical details had blurred in my mind. And now it seemed rude to ask.

After all, why did I need to know? Many nonbinary people I had talked with had already asked me not to mention whether they had been assigned female or male at birth, to deter readers from making false presumptions. I couldn’t imagine how the information would change what I asked or how I acted. Yet I could not quiet the part of my mind that insisted on guessing. It felt too much like I was flying blind.

Mx. Fogel wore jeans and a button-down shirt. For the average woman, they were a bit tall, I calculated, or maybe they were a touch shorter than the average man. The pitch of their voice was moderate, their blond hair cut short.

It wasn’t much to go on. I considered surreptitiously opening the file with my earlier notes, but I was busy taking new ones as they told me how information on nonbinary gender identities had been hard to come by just a few years earlier.

“The first nonbinary person I knew,” they said, “may have been me.”

The rapid rise of younger Americans asking to be called by gender-neutral pronouns — over a third of teenagers personally know someone who does — has baffled many of their gender-conforming elders.

My own teenager, after hearing me announce that I’d had my first interview with a nonbinary individual whom I proceeded to refer to as “she,” forbade me to schedule my reporting trip to Maryland: “Mom,” she implored me, “you can’t talk to anyone.”

But to write about the arguments over state IDs, I needed to better understand the challenges facing nonbinary individuals in the realm of the interpersonal. In Maryland, Ed Luiggi, a student at Centennial High School who testified on behalf of the “X” license, invited me to attend a weekly meeting for L.G.B.T. students at the school, in Ellicott City. At one point, there was some debate between transgender students who identify as one of the binary genders and those who identify as nonbinary, about which group faced more social stigma.

“It’s a whole lot easier to be binary,” the group’s faculty adviser, Susan Gerb, who identifies as nonbinary, told me. “With nonbinary, a lot of people don’t even know what it is.”

Nonbinary gender identities include androgyne (a combination of masculine and feminine), agender (the absence of gender), gender-fluid (moving between genders) and third-gender (a gender not related to the binary genders).

I visited with several nonbinary adults as well as gender-conforming parents of nonbinary children, many of whom reassured me that it took time to get the hang of using “they” to refer to one person.

Lisa Reff, a Maryland lawyer who had urged her state representative to sponsor the “Gender X” legislation, said she had struggled with her teenager’s request until another parent told her it was standard for the verb to match the pronoun.

Ms. Reff, who said she disliked wearing skirts and dresses as a child, also voiced a confusion I heard from several other women who grew up as 1970s- and 1980s-era feminism was vowing to smash gender-role stereotypes. “My question was, how is this different from being a tomboy?” she said.

One scientist with whom I spoke felt ambivalent about the new convention at professional conferences that attendees write their pronouns on name tags. After decades of fighting for women in the field to be seen as scientists first, she noted, they are now literally being labeled by gender.

But Jamie Grace Alexander, a nonbinary college student who helped to craft testimony on the Maryland bill, told me there was value in having “a name for what I am” rather than trying to expand deeply ingrained conceptions of “male” and “female.’’

The degree to which expectations of appearance, abilities and behavior are still attached to the binary genders, many informed me, tends to become more evident in light of identities that combine, reject, partially embrace or alternate between them. Parents became aware of how often they are asked the gender of their children as a kind of small talk. Students became aware of how frequently teachers address them as “ladies and gentlemen.” The Facebook group Ah Yes, the Two Genders specializes in documenting gender-reveal party cakes, bathroom signs and other reflections of this penchant for the binary-gender classification.

Dr. Jason Rafferty, the author of the American Association of Pediatrics’ first policy statement on the care of gender-nonconforming children, which was issued last fall, said most of the bullying in middle and high school is based on gender.

“It’s not having the right body, not being masculine enough, not being feminine enough,” Dr. Rafferty explained. “I think we all struggle with gender, but we just don’t realize it.”

I’m not sure at what point in our 90-minute conversation at Starbucks my discomfort at not being able to slot Mx. Fogel into one of the two standard gender categories dissipated. During the rest of my interviews with nonbinary people on that trip, I sometimes needed to ask about their gender-identity history. But other times I came to understand that rather than flying blind, I was seeing all I needed to see.

Follow the @ReaderCenter on Twitter for more coverage highlighting your perspectives and experiences and for insight into how we work.

Amy Harmon is a national correspondent, covering the intersection of science and society. She has won two Pulitzer Prizes, for her series “The DNA Age”, and as part of a team for the series “How Race Is Lived in America.”

'The Sopranos's' New Jersey home is reportedly listing for sale for a 'starting price' of $3.4 million