Home » Entertainment » Cooking With a Dash of Science 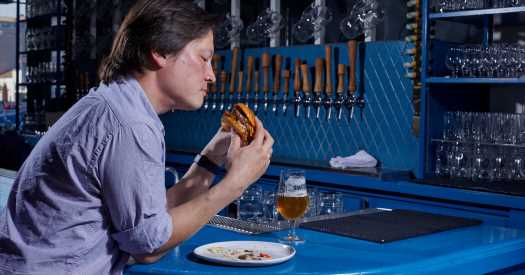 Cooking With a Dash of Science

J. Kenji López-Alt, a food columnist for The New York Times, approaches home cooking like a scientist. He explains the basic elements of food like proteins and fat and examines what happens to them on a molecular level during cooking — all in the name of making the best scrambled eggs, the best burger or a perfectly light schnitzel (the secret is vodka, among other things). He is also a James Beard award-winning cookbook author with a popular YouTube channel. Here, he talks about the influences that shaped his cooking, how he views science in the context of food and what he makes at home. This interview has been edited.

How would you describe your approach to cooking?

How did you arrive at that view?
I’ve always been into science. My father is a scientist. My grandfather is a scientist, so that was part of my education growing up. After college, I was cooking in restaurants, and I had a lot of questions about why certain things worked the way they did. I eventually transitioned to doing recipe development at Cook’s Illustrated. They do quite a bit of technique and science-based stuff, and that was my main focus there. Afterward, I was at Serious Eats, when the founder suggested I write a weekly food science column. What I do for The Times is a little bit different. I try to really focus on research, beyond just the experiments at home. So, I do a lot of reporting and interviewing and talking to other chefs about how they approach recipes.

How do you figure out the science? Who are your sources?

So, there are two different usages of the word science. There’s capital S “Science,” where we’re talking about professional scientists and food sciences and peer-reviewed studies. Then there’s the general term “science,” which is really just the scientific method: hypothesizing, designing experiments and tracking results.

For example, I think my first column at The Times was about what factors affect how easily a hard-boiled egg is going to peel. I designed my own experiments. I cooked eggs multiple different ways, and then I had like a hundred people come in and just peel eggs and collect the data. I saw when I cooked the eggs one particular way, 80 percent of the people were able to peel the eggs with only one of the eggs getting a few little cracks in it. Whereas, if I cooked it a different way, only 40 percent of the people were able to do that. We found that steaming the eggs was the best way.

What kind of meals or recipes are you drawn to?

There’s a big difference between what I write about and what I cook at home. I consider my articles and my recipes to be guides or atlases. It’s like: “I’m going to give you all this information, but I’m not expecting you to do it exactly the way I do.”

When I’m cooking for myself at home, I’m a super adaptable cook. I cook based on how much time I have and whatever leftovers I have, and I make adjustments on the fly. My goal is that if you read one of my articles, you get a really good understanding of how a particular dish is made. That way you can sort of decide for yourself: “Hey, is this going to work if I only have like a pork cutlet in the fridge instead of a chicken?”

So you’re not a meal planner or a Sunday meal prepper?
No, I don’t know what we’re having for dinner tonight.

So cooking at home is still a fun thing for you. It doesn’t feel like a chore.

Oh, yeah. It’s lots of fun, especially now that I cook with a little kid. My daughter is 4 and loves cooking and she loves food. She uses a regular cutting board with a regular knife. Ever since she was little, I’ve been trying to show her how to cut properly. She does the little claw grip. She has a helper stool, so she can stand at the stovetop and shake the pan and stir it and do all that kind of stuff.

Is there a food science question that you’re really fascinated by right now and determined to figure out?

Honestly, right now, I’m actually planning on writing another children’s book. It is titled “Trust Me I’m a T. Rex,” and the idea is about a T. Rex trying to convince you that it’ll be a good babysitter.

How to forage blackberries and what to make with them
Entertainment