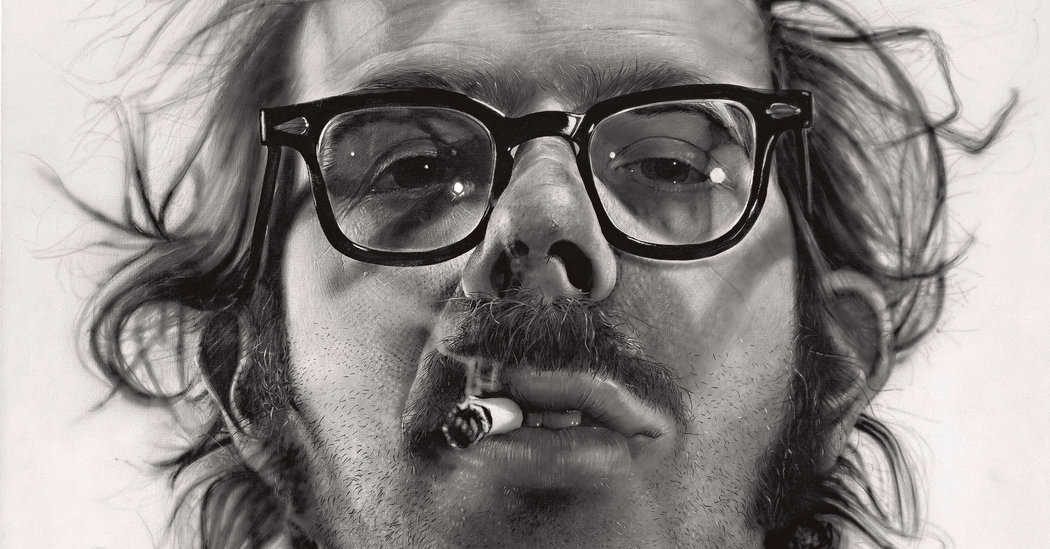 Chuck Close, who rose to prominence in the 1970s and ’80s with colossal Photorealist portraits of himself, family members and fellow artists, but who late in his career faced accusations of sexual harassment, died on Thursday in a hospital in Oceanside, N.Y. He was 81.

His death was confirmed by his lawyer, John Silberman.

At the end of the 1960s, a period when formalist abstraction and Pop Art dominated the contemporary scene, Mr. Close began using an airbrush and diluted black paint to create highly detailed nine-foot-tall grisaille paintings based on mug-shot-like photographs of himself and his friends.

His first, and still one of his best known, is a self-portrait in which he stares impassively back at the camera through plastic black-rimmed glasses. He has messy, stringy hair, his face is unshaved, and a cigarette with smoke rising from it juts from the corner of his mouth — a rebel with a new artistic cause. 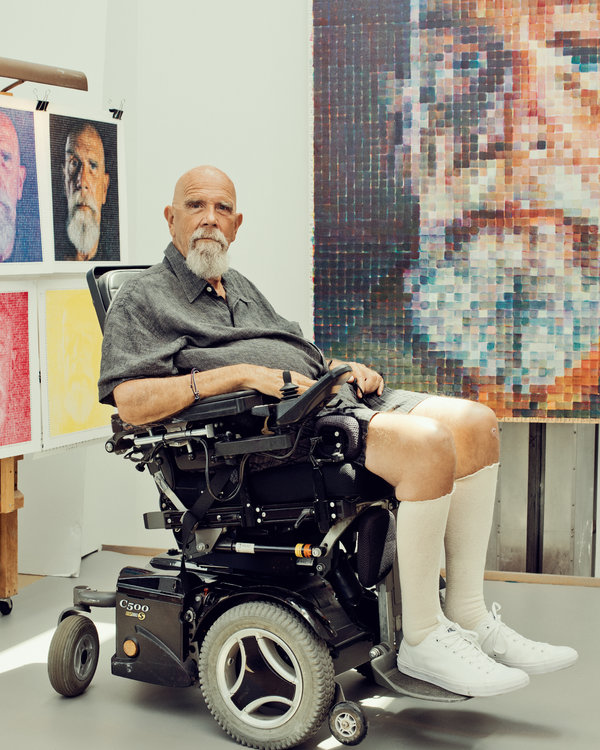 This and his other paintings from about the same time — including portraits of the painter Joe Zucker, the sculptor Richard Serra and the composer Philip Glass — were indistinguishable from photographs when seen in reproduction. When seen in person, they had a monumental, uncannily imposing presence. The giant, expressionless faces gaze back at viewers with vaguely discomfiting inscrutability. At a close distance, the paintings turn into landscape-like fields of facial details, with every hair, pore, wrinkle and blemish greatly magnified.

Four years ago, several women, a number of whom had come to his studio to pose, accused Mr. Close of sexually harassing them at various times between 2005 and 2013. He acknowledged that he had spoken candidly, even crudely, to women about their body parts, but he said he had done so in the interest of evaluating them as possible subjects.

“If I embarrassed anyone or made them feel uncomfortable, I am truly sorry, I didn’t mean to,” he told The Times at the time. “I acknowledge having a dirty mouth, but we’re all adults.”

In December 2013, Mr. Close received a diagnosis of Alzheimer’s disease, which was amended to frontotemporal dementia in 2015, according to his neurologist, Dr. Thomas M. Wisniewski, the director of New York University’s Center for Cognitive Neurology. In a telephone interview, Dr. Wisniewski said the conduct of which Mr. Close was accused could be attributed to the disease.

“He was very disinhibited and did inappropriate things, which were part of his underlying medical condition,” Dr. Wisniewski said. “Frontotemporal dementia affects executive function. It’s like a patient having a lobotomy — it destroys that part of the brain that governs behavior and inhibits base instincts.”

“Sexual inappropriateness and disastrous financial decisions are common presenting symptoms,” he added. “I’ve had a few patients who ended up in jail.”

The allegations prompted a larger reckoning around whether art can be separated from the conduct of the artist. The National Gallery of Art in Washington decided to indefinitely postpone an exhibition of Mr. Close’s work in the wake of the accusations.

Mr. Close was not the first to make Photorealist paintings. Artists like Richard Estes and Robert Bechtel were painting careful copies of photographs in the mid-1960s. But no one else had transformed photographs into paintings of such aggressive visual and psychological impact.

Mr. Close refined his technique and added color in the 1970s. He devised a process by which he would airbrush separate layers of red, yellow and blue to create full-color pictures of striking photographic verisimilitude. He achieved his most extreme realism in “Mark” (1979), a portrait of his friend the painter Mark Greenwold, which is in the collection of the Metropolitan Museum of Art.

Mr. Close did not like to think of himself as a realist, photo or otherwise. In many ways he was closer to a conceptualist like Sol LeWitt, whose sculptures and murals were made according to preconceived rules and instructions. Tension between opposites like realism and abstraction, surface and depth, reality and illusion remained central to Mr. Close’s art throughout his career.

Increasingly, his paintings, drawings and prints emphasized the systems, processes and materials by which they were conceived and made. In the 1970s, he began to translate his photographic sources into pixelated images, filling in the individual cells of a grid with distinct marks, colors and tones that would cohere into photographic images when viewed from a distance. Using techniques and materials as various as watercolor, pastel, etching, handmade paper pulp and his own fingerprints, he continued to explore the dialogue between the physical facts and the photographic illusion.

His pragmatic, problem-solving approach would serve Mr. Close well in the second half of his career. In New York, on Dec. 7, 1988, he was felled by what turned out to be a collapsed spinal artery, which initially left him paralyzed from the neck down. In the ensuing months of rehabilitation, he began to regain movement in his arms, and he was able to sit up and paint using brushes strapped to his hand.

He not only returned to painting with unimpaired ambition but also began producing what many would view as the best work of his career. And he resumed his busy social life, attending gallery openings, giving talks around the country and attending exhibitions of his work in Europe and elsewhere.

In the years after his injury, Mr. Close painted in a looser way, partly because he had lost the fine motor coordination in his fingers. Even before the injury, however, he had been moving toward a brushier, more expressive and more colorful way of painting. Working on large gridded canvases prepared by assistants, he worked from left to right and top to bottom, filling each square of the grid with vibrant painted shapes resembling doughnuts, amoebas and hot dogs. Up close, the new paintings seemed to swarm with woozy, almost psychedelic energy, while from a distance the image would emerge in all its photographic exactness.

Mr. Close also expanded his list of subjects. He began to paint not only his closest friends and family members but also many other well-known artists, from veterans like Jasper Johns and John Chamberlain to younger comers like Cindy Sherman and Kara Walker. He became the New York art world’s court painter. Only once did he break his own rule of painting only other artists, immediate friends or family members: In 2006 he made a portrait of former President Bill Clinton, who had awarded him a National Medal of Arts in 2000.

Charles Thomas Close was born on July 5, 1940, in Monroe, Wash. His mother, Mildred (Wagner) Close, was a classically trained pianist who gave piano lessons at home. His father, Leslie, who died when Chuck was 11, was a plumber, sheet metal worker, store window decorator and amateur inventor. Dyslexic and not athletic, Chuck Close focused on making art from an early age.

Despite an unpromising high school record, he went on to junior college and then transferred to the University of Washington, Seattle, graduating as an art major with high honors in 1962. He then entered the master of fine arts program at Yale University, where his classmates included Richard Serra, Brice Marden, Jennifer Bartlett and several others who would become well-known artists in New York.

While in college and graduate school, Mr. Close made Abstract Expressionist-style paintings under the influence of Willem de Kooning. (Years later he recalled meeting de Kooning and telling him, “It’s nice to meet someone who has painted more de Koonings than I have.”)

After earning his M.F.A. in 1964 and studying in Vienna on a Fulbright grant, Mr. Close took a teaching job at the University of Massachusetts in Amherst. There he met Leslie Rose, a student in his first drawing class. They would marry on Dec. 24, 1967.

During his time in Amherst, Mr. Close radically rethought his approach to painting. Turning his back on abstraction, he created a giant black-and-white Photorealist painting of a reclining nude woman. He destroyed that painting before finishing it, but he created another version of it, called “Big Nude,” after he and his wife-to-be moved to Manhattan in the summer of 1967.

The next year, Mr. Close completed the self-portrait with the cigarette, and the Walker Art Center in Minneapolis bought it out of his studio for $1,300 in 1969. He created seven more black-and-white portraits over the next two years, including one of Mr. Serra, “Richard” (1969), which was included in the Whitney Annual (later the Whitney Biennial) of 1969.

In 1970, Mr. Close had his first New York solo exhibition, at Bykert Gallery. He chose that gallery partly because it did not specialize in realism, from which he wanted to disassociate his work. After Bykert closed in 1975, he exhibited his paintings regularly at the Pace Gallery in New York for the duration of his career.

Mr. Close had his first major museum retrospective in 1980 at the Walker Art Center. The Staatliche Kunsthalle in Baden-Baden, Germany, mounted another retrospective in 1994. In 2005, the Walker assembled an exhibition of his self-portraits. In 2007, the Museo Nacional Centro de Arte Reina Sofia in Madrid presented “Chuck Close Paintings: 1968-2006.”

Last year, Pace presented an exhibition of his work at its Hong Kong gallery in collaboration with White Cube. Pace also co-organized a solo show at Gary Tatintsian Gallery in Moscow, which opened in June and is on view through Sept. 25.

“He was one of my dearest friends for over 40 years,” said Arne Glimcher, the founder of Pace. “I was honored to know him and to show his work, which I believe is inextricable from the greatest achievements of 20th-century art.”

Mr. Close participated in many major international exhibitions over the years, including Documenta in 1972 and 1977, the Venice Biennial in 1975 and 2001 and the Carnegie International in 1995-96.

After he began making his large portraits, he abandoned painting nudes. But in subsequent decades, he regularly produced photographs of naked subjects, male and female, including the supermodel Kate Moss. In 2014, Pace presented a survey of his nude photographs along with his 1967 painting “Big Nude.”

Mr. Close was supportive of many artists and cut a prominent figure in SoHo during the years when the neighborhood was New York’s center for contemporary art. But his reputation suffered a serious blow in December 2017, when several women whom Mr. Close had invited to pose for photographs publicly accused him of sexually inappropriate verbal behavior while they were alone with him in his studio. (No one accused him of physical assault.)

In response to the allegations, the National Gallery of Art postponed an exhibition of his works it had planned to open in May 2018.

Mr. Close was divorced from his first wife. His marriage to the artist Sienna Shields in 2013 also ended in divorce.

His survivors include his daughters, Georgia and Maggie, and four grandchildren.

In many interviews Mr. Close spoke eloquently about his art, communicating a clarity of purpose and a disarming humility. In a conversation published in the catalog for his 1998 retrospective at the Museum of Modern Art in New York, he told the show’s curator, Robert Storr:

“I’m either dumber than the average painter, which is a pretty scary thought, or maybe there’s something about my learning disabilities or whatever that I am really of the moment. I don’t think much about the past, and I really don’t think about the future. I am surprised often that I’m still painting portraits at all, to tell you the truth.

“I don’t predict what I’m going to do. I don’t plan ahead that much,” he continued. “It doesn’t matter where the whole art world is going. I’ve got my own little trajectory.”