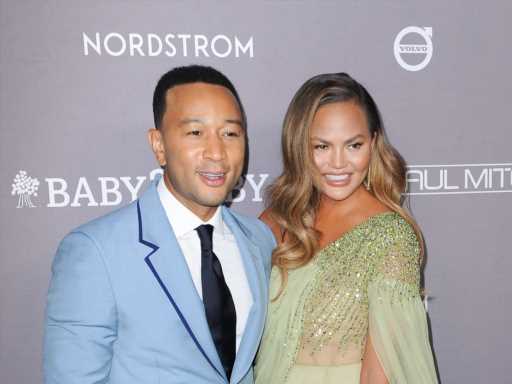 If you’re married to Chrissy Teigen, then you know she’s going to troll you as much as she’s going to love you up. John Legend clearly doesn’t mind, though, because he knows how much his wife adores him. On Tuesday, she honored her man by getting naked and having the title of his new song tattooed down her spine.

The sexy Instagram video shows Teigen, with a towel draped on the lower half of her body, lying on the table as Legend watches while she has title of his sexy new song, “Ooh Laa,” prepped on her back for the tattoo. The song, from Legend’s album Bigger Love, plays in the background of the video and we get to hear their pillow talk — and Legend is definitely recalling a mood.

“Tell everyone about the first time you heard this song,” he says in a sultry voice.

The supermodel kills the mood by drolly responding, “I don’t remember.”

“I remember,” he replies with a mischievous look in his eye. Oh, we’re feeling you, John, even if Chrissy isn’t. He goes on to say that it was in their bedroom, but Teigen isn’t feeling his vibe.

“We had to test run it — make sure it worked,” he mugs right at the camera. “It worked. We actually played it on repeat the first time.”

Teigen gets a bit impatient, then: “Just say it. Say what you want to say.” It’s a hilarious exchange because he’s not only testing his songs out on his wife to see if they’re good to hook up to, he’s also hitting repeat because it’s obviously in his bag of sex tricks with Teigen. “It was a good conversation starter,” he laughs.

We’re loving everything about this — the tat, the song, the two of them. And we have to say, Legend knows the magic in his music. As the tattoo process goes along, the two hold hands and embrace in a hot kiss at the end of the video. Teigen totally fell under his spell — and we did, too.

Before you go, click here to see celebrities who have opened up about their sex lives.