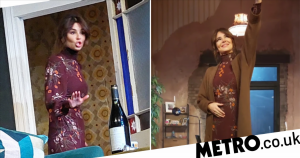 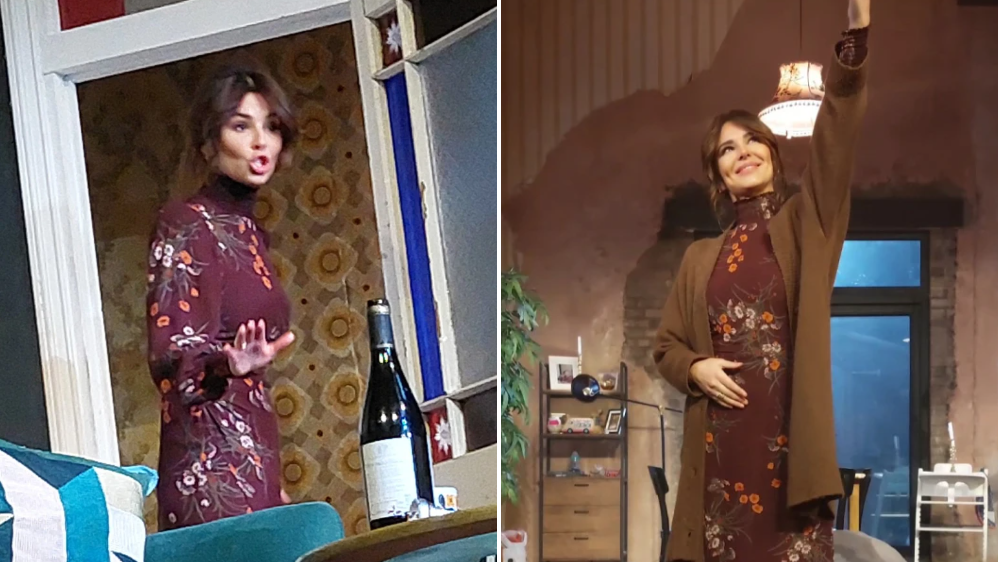 Cheryl well and truly gave her West End debut her all, as photos show the Girls Aloud star giving the performance of a lifetime.

The Call My Name hitmaker confirmed her return to the spotlight back in December, announcing that she would be starring as Jenny in 2:22 A Ghost Story, a role previously played by Lily Allen, Giovanna Fletcher, and Laura Whitmore.

Cheryl will be starring in the role from January to April at the Lyric Theatre in London.

First snaps of the performance capture the Geordie star right in the swing of things, certainly not holding back when it comes to emotions.

One shot sees the former X Factor judge standing up and shouting, placing her hand up as a way of conveying anger.

In another, she sits on a sofa with a mug of tea, clearly deep in thought.

A third photo captured Cheryl with a grey blanket draped over her shoulders as she sipped on a glass of wine.

Getting into character as Jenny, the pop princess donned a purple floral dress with black boots, and swept her brunette locks back into a messy up do.

But you don’t have to take our word for it that Cheryl’s first West End show was a roaring success, as audience members have already shared how impressed they were.

One fan captured a video of Cheryl and her fellow cast members taking a bow at the end, with the star beaming with pride as the venue cheered and applauded.

Sharing their thoughts on her acting skills, one praised how Cheryl was able to ‘hold her own’ on the opening night.

‘You were phenomenal’, another tweeted the star.

Tweeting a photo of the queue outside the theatre, one ticket holder wrote: ‘2:22 A Ghost Story was absolutely packed to the brim on opening night to see Cheryl. I had no expectations and she did a good job. Plus I did not clock the twist even after making jokes at the interval.’

Another very satisfied audience member tweeted: ‘That was electric! I got so many goosebumps! @CherylOfficial made her West End Debut and was brilliant as Jenny so were cast members Scott Karim as Sam, Louise Ford as Lauren & Ben Cutler as Ben!’

Written by Danny Robins and directed by Matthew Dunster, the show follows Jenny, who believes her new home is haunted, while her husband Sam is not having any of it.

The couple argue with their first dinner guests, old friend Lauren and her new partner Ben, as belief and scepticism clash.

It’s believed that Cheryl is earning a very nice £1,000 for each show, with The Sun reporting that the massive deal will see her earn £100,000 by the time the run ends in spring.

The Masked Singer: Who was revealed as Rubbish was eliminated?