If you’re shopping for health insurance this fall for coverage starting Jan. 1, start early and set aside a full day to learn about your options. 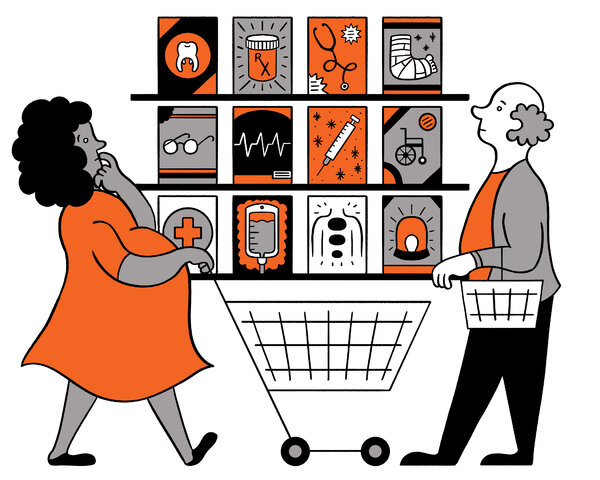 Amid uncertainty during a pandemic and a U.S. Supreme Court challenge, open enrollment in health insurance marketplaces began on Nov. 1. In all 50 states, individuals and families who lack insurance or want better coverage can enroll in plans that comply with the Affordable Care Act through Dec. 15, although enrollment ends later in 10 states and the District of Columbia.

Last fall, 11.4 million Americans signed up for coverage during open enrollment, and that number is expected to rise this year because an estimated 20 million people have lost their jobs since February.

Shoppers can choose among private plans in four levels (bronze, silver, gold and platinum) and will find rates for 2021 are about the same or slightly lower than they were this year in most states.

The future of the law itself, however, is uncertain. Next week, the Supreme Court will hear arguments in the case of California v. Texas, in which the Trump administration and attorneys general from Republican-led states are challenging the A.C.A.’s mandate that Americans must have health insurance. A decision is expected next spring that could kill the law, along with its protections for Americans with pre-existing conditions and Medicaid expansion.

The Department of Health and Human Services (H.H.S.) has also made dramatic cuts to funding for health insurance navigators who assist shoppers using the marketplaces. That means these helpers may be in short supply this year, particularly in the 36 states that use the federal marketplace.

“That’s another reason to start early,” said Karen Pollitz, a health insurance expert at the nonpartisan KFF (previously the Kaiser Family Foundation). “That’s my advice every year, but this year that’s my strong recommendation even if you don’t need assistance. But if you do, you may find there’s a shortage of help.”

More navigators may be available, however, in the other 14 states and the District of Columbia that run their own marketplaces, she added.

The uninsured have options.

Anyone who lost employer-provided health insurance can be eligible to enroll through the marketplaces either during open enrollment or within 60 days of a job loss. Also, those who face pandemic-related delays (such as a hospitalization) can request extra time to enroll, Ms. Pollitz said.

For Ms. Pollitz, the A.C.A. is like the opposite of a game of musical chairs. Instead of removing the safe places to land when you lose a job, the law added room for the uninsured. “So, when the music stops, or your job ends, there’s still a place for you,” she said.

There are also ways to lower the bill, through tax credits. Consumers whose estimated income in 2021 will be between the federal poverty level ($12,760 per year for individuals and $26,200 for a family of four) and four times that amount ($51,040 for individuals or $104,800 for a family of four) will be eligible for tax credits to subsidize coverage.

If your income is likely to be below the poverty level and you live in one of the 13 states that has not expanded Medicaid, coverage will be tricky. You may fall into the “Medicaid gap.” “That’s when you’re too poor for marketplace subsidies and too well-off for Medicaid,” said Sabrina Corlette, a research professor at the Center on Health Insurance Reforms at Georgetown University.

In Alabama, for instance, roughly 134,000 people could fall into this gap, according to KFF.

One of the reasons that marketplace premiums remained the same or dropped in 32 states is that health insurers had record profits this year, said Sara R. Collins, vice president for health care coverage and access at the Commonwealth Fund, a private foundation that supports health care research.

Rates vary by the state, insurer and the metal level (bronze, silver, gold and platinum). Bronze plans usually have the lowest premiums but deductibles and co-payments will be higher. Gold and platinum plans may have higher premiums but lower out-of-pocket costs.

Once on the healthcare.gov site, the marketplace will calculate your tax credit, which is based on the benchmark plan in your region, said Louise Norris, who has run a health insurance brokerage in Colorado since 2003 and writes about the topic for healthinsurance.org and Verywell. (H.H.S. designates the benchmark plan as the second-lowest-cost silver plan in your region). If you qualify for a tax credit, the exchange will apply it to any of the plans named for metals (but not “catastrophic” plans aimed at healthy young people). Credits for out-of-pocket costs also are included but only on silver plans and only if you’re eligible.

Using KFF’s Health Insurance Calculator, a hypothetical nonsmoker, age 55, earning $40,000 next year would pay $786 per month for a silver plan but would be eligible for a tax credit worth $458 per month, making the monthly costs for that plan only $328. “Every month, the I.R.S. would send that tax credit to the consumer’s health insurer, meaning he or she would pay only $328 each month and account for it on his or her tax return at year end,” Ms. Norris explained.

In October, H.H.S. reported that 22 new health insurers were offering coverage for 2021, bringing the total number to 181. Also, the average monthly payment for the benchmark plan dropped by two percent for 2021 when compared with this year’s rate, the third consecutive year that average premiums have dropped since the A.C.A. went into effect, according to KFF data.

In the marketplaces, all insurance plans need to provide comprehensive coverage, which includes payment for pre-existing conditions, major medical expenses like hospitalization and rehabilitation, mental health, maternity care and prescription drugs. Out-of-pocket costs for deductibles and co-payments for some plans can be high, but tax credits, assuming you qualify, can help. Insurers also sell A.C.A.-compliant plans outside of the marketplaces.

While these cheaper plans are legally allowed, some of them impose dollar limits when you need care, and others will cancel your policy if you have an illness or need surgery.

Consumers can protect themselves by staying on the marketplace sites, or making sure their plan is compliant with the A.C.A. Some non-A. C. A. plans may use deceitful tactics to lure unwary consumers.

“States struggle to keep a lid on deceptive websites because it’s like whack-a-mole: You shut down one bad operator and he pops up somewhere else,” Ms. Corlette said.

There are low income options, too.

Those with incomes less than about $1,000 per month may be eligible for free coverage under Medicaid when they apply through the marketplaces, particularly in the states that expanded Medicaid (Missouri and Oklahoma have not yet carried out their expansion programs).

It pays to shop carefully because health plans with low premiums also may have limited networks of physicians and hospitals. Insurers’ costs rise when they add physicians and hospitals to their networks because each provider negotiates separately with each health insurance company. That’s why health insurers seeking to keep costs low offer narrow networks of doctors and hospitals in lower-cost plans, while gold and platinum plans generally have broader networks. Make sure your family doctor or your preferred hospital is included in the plan you want.

Lastly, employers are also enrolling workers and their families in coverage for next year. The best place for advice is your human resources department. Also, enrollment is open through Dec. 7 for Medicare Advantage and Medicare prescription drug plans, which insurers offer in every state. Advice on these plans is available at State Health Insurance Assistance Programs.

Tesla Releases Its Own $250 USD Tequila