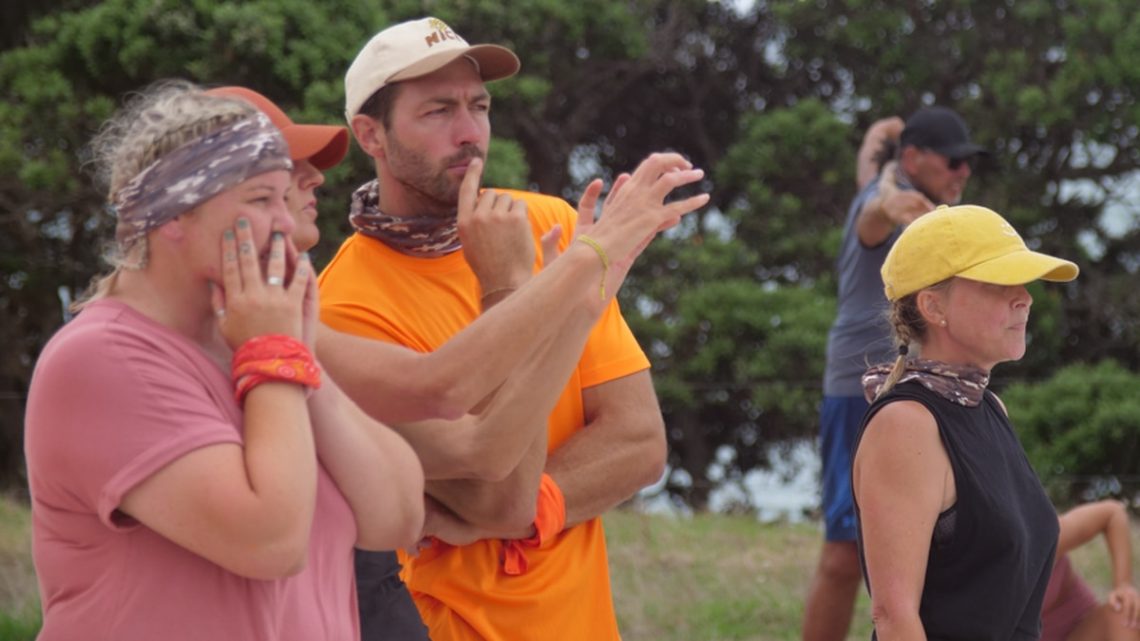 This episode has me riled.

I left you with a cliffhanger last night and the promise of confrontation at Team Repo but now I have to apologise because it never happened. It was skipped over like those pesky texts to your ex you sent after a couple of wines.

I waited a whole 24 hours for the confrontation and the most I got was Edna Swart complaining about her whites not being separated when they sent their laundry away and JJ Fong saying she felt a bit down after last night’s confrontation … that we never got to see.

But enough about my disappointment.

Tonight’s episode saw Art Green’s man-crush on Richie Barnett flourish. If this was the Bachelor, Art would be desperate to skip to the end and give Richie the final rose.

“Richie is the full package,” a gushing Art said as they searched for kina and had a romantic morning on the beach. Matilda, watch out queen, Barnett is coming for your hubby.

While discussing tactics, the lads decided everyone in team Katipō was on the same page. Yikes. Hate to break it to you two, but Angela Bloomfield is busy turning the rest of the team against you.

More on that later.

The face-off tonight saw the teams break apart a puzzle wall by throwing balls at it, only for one of their team members to put it back together. The first team to complete the puzzle won and their prize was a food raid at the losing team’s camp.

Repo, now with three more members than Katipō, decided to bench Swart, Lance Savali and Buck Shelford. It seemed an odd decision to let Swart and her feisty personality sit out as well as the former All Black and fit dancer when this challenge was all about strength and co-ordination.

The face-off went on for what felt like forever and in the end, Katipō finally took out a win.

It was raid time, baby.

Unfortunately for Team Katipō, Swart, the forward-thinking, strategic boss babe, hid some of their canned food in the bushes. All is fair in love and war I guess.

Barnett and the rest of Katipō with their new pantry options discussed who would be going up for elimination and in possibly the worst captain strategy ever, Barnett kept it a secret, telling his team, “I want you to be ready as if you are going up for it.”

I don’t think that’s the best way to gain confidence, but what would I know? I never played a team sport in my life.

After checking out what the elimination round contained, Barnett changed his mind very last minute about who would face elimination.

The reaction from Katipō was not great.

“It’s probably not what I would have done,” Green told the confession camera.

The two eyed up their challenge which looked like a giant version of those puzzle wheels you buy from the $2 shop to keep your child entertained for five minutes.

The goal of the game was to free three balls from the puzzle wheel. The first to do it, won.

Viewers at home were waiting for Green to take out the win as he has been dubbed by almost every media outlet as the celeb that is “probably going to win” Treasure Island underdog Stent was in the lead. There was no way she was letting Green catch her.

She freed one ball, then two and just when it looked like Green was catching up, Stent took out the win.

The devastation was written all over Barnett’s face but Bloomfield sat in the corner with an evil smirk on hers.

“We’re looking for an all-girl finale and he took out one of the biggest players. We didn’t really even have to do too much for that to happen.”

On reflection, I initially called Swart scary but I’m beginning to think Bloomfield is the one more likely to do anything to win. Friends? Teammates? What are those?

After Green’s goodbyes, Stent won a piece of pirate gold and her team were stoked. But back at camp Katipō, Barnett lost his cool, telling his team not to make assumptions about his choice to put Green up but to simply ask if he intended for him to go home.

The tension could be cut with a knife. Could this be the end of captaincy for Barnett?

Come back next week to find out.

For all the inside gossip and behind the scenes stories, listen to Inside Celebrity Treasure Island hosted by S2 contestant Kim Crossman!

PM says everyone should have Covid jab amid Strictly row
Entertainment