Home » Entertainment » Catie Lazarus, Comedian With a Lot of Questions, Dies at 44 Catie Lazarus, Comedian With a Lot of Questions, Dies at 44

Catie Lazarus, a writer and comedian who probed the minds of celebrities and created her own late-night comedy universe on her longstanding self-produced live New York talk show, “Employee of the Month,” died on Dec. 13 in her apartment in Brooklyn. She was 44.

Her father, Simon Lazarus III, said the cause was breast cancer.

In 2011, as the nation recovered from the Great Recession, Ms. Lazarus was just another struggling comic trying to make it in New York. She had dropped out of a doctoral program in clinical psychology at Wesleyan University to move to the city, but as she tried establishing herself on the stand-up circuit, she discovered that stable jobs were hard to find. In light of these circumstances, she started hosting “Employee of the Month,” an interview-based talk show about work and labor at the Upright Citizens Brigade Theater.

Ms. Lazarus asked notable writers, artists, politicians, intellectuals and comedians how they had achieved their enviable careers. She eventually interrogated subjects like Rachel Maddow, Dick Cavett, Greta Gerwig and David Simon. She inquired about disappointment, too — for example, she asked the journalist Kurt Andersen how he felt about getting pushed out of New York magazine.

“I started hosting this show because I couldn’t quite figure out how to break in,” Ms. Lazarus told The New York Times in 2015. “I wanted to hear from people who, for the most part, love what they do and have carved out a niche for themselves. It wasn’t just about how they broke in, but what they continue to find worth struggling for, worth the heartache and the rejection and the economic toil and other types of losses that go along with it.”

Her disarmingly intrusive interview style developed a following, and in 2014 Ms. Lazarus started hosting the show monthly at Joe’s Pub at the Public Theater. A live band accompanied her onstage, and nights crackled with the spontaneous energy of late-night television. 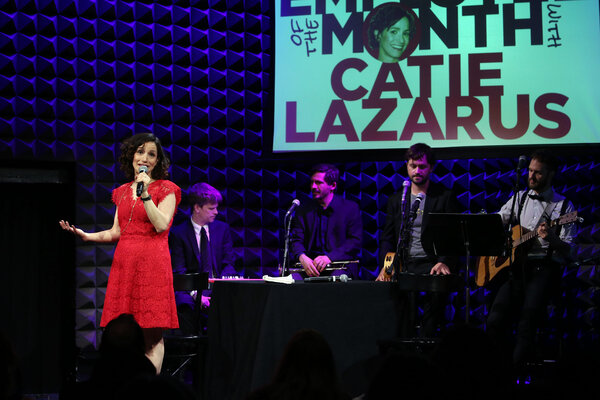 Ms. Lazarus approached her inquiries from a more philosophical level as well, seemingly trying to answer a bigger question: Why exactly do people do what they do for a living during their relatively brief time on earth? She often steered guests into illuminating revelations and spectacle.

Wallace Shawn reminisced about how he had considered becoming a taxi driver. Billy Crudup whispered something to her when she asked him how much he was paid for voicing Mastercard ads (she looked shocked). Gloria Steinem tap-danced onstage. And Ms. Lazarus asked Josh Russ Tupper, a co-owner of Russ & Daughters, to participate in a blind taste test of lox from his competitors Zabar’s and Barney Greengrass.

“They said you can tell the difference in the lox,” she challenged him. “Do you feel there’s a difference in how your lox tastes?” (Mr. Tupper largely succeeded in identifying his shop’s salmon.)

Lin-Manuel Miranda, who appeared on the show, was also a frequent guest in her audience. “Catie was the ultimate New York comedy connector,” he said in a phone interview. “Once you did the show, you were in the alumni group.” He added: “It’s unbelievable the level of connections that came through there. People before they blew up. After they blew up.”

Catherine Simone Avnet Lazarus was born on April, 26, 1976, in Washington. Her father was a public policy lawyer who had been associate director of the White House domestic policy staff in the Carter administration. Her mother, Rosalind (Avnet) Lazarus, was a federal government lawyer. A great-great-great-grandfather was Simon Lazarus, founder of the Lazarus & Company department store chain, which later became Macy’s Inc.

A nursery report card from the Beauvoir School appeared to portend Ms. Lazarus’s future. “Katie is a great talker and will volunteer to sit in the ‘hot seat’ and speak on any topic whether she knows anything about her subject or not,” it read. “The class expects this now and, in fact, the resulting arguments are more lively due to Katie’s proddings.” (Ms. Lazarus delighted in this document as an adult and quoted from it frequently).

She attended the Maret School and Wesleyan University, where she received a B.A. and an M.A. in psychology. She eventually pursued a doctorate in clinical psychology at Wesleyan but dropped out after a semester to try comedy in New York. (Ms. Lazarus said that an encouraging chance encounter with Tina Fey, in which they discussed improv, helped galvanize her decision.)

Ms. Lazarus first took the stage at Stand Up NY on the Upper West Side, and she relished the nervous rush of trying to get people to laugh. She began performing on the comedy circuit at clubs like Carolines on Broadway and the Laugh Factory. And she took improv classes at the Upright Citizens Brigade Theater, where she started hosting her show. Early guests included Rachel Dratch, Reggie Watts and the Times journalist David Carr.

“I was keenly aware that people went on to achieve these great things,” Ms. Lazarus told The Times. “I just didn’t know the steps that were involved to get there. That is why I started my show, because there is somewhat of a science to success.”

In 2015, Ms. Lazarus had a career break herself when Jon Stewart gave her his first interview after leaving “The Daily Show.” She pressed Mr. Stewart about his next projects and who he thought might replace him on the show. While discussing his career, she projected an image of him wearing underwear in a spoof of a Calvin Klein ad from his MTV talk-show days.

Around 2017, Ms. Lazarus ended her run at Joe’s Pub and brought her show to other venues, including the Gramercy Theatre in Manhattan and the Bell House in Brooklyn. Slate started airing a podcast of the show in 2018. Ms. Lazarus also took the show on the road, hosting it at Largo in Los Angeles and at the Sundance Film Festival.

In addition to her father, Ms. Lazarus is survived by two brothers, Ned and Benjamin; her mother; and her stepmother, Bonnie Walter.

In 2019, Ms. Lazarus took a break from her talk show. She had learned she had breast cancer in 2014 and underwent chemotherapy for years. She also wanted to finish a book of personal essays she was working on. As the pandemic took hold of life in New York, Ms. Lazarus spent her time at her apartment in Prospect Heights, writing in the company of her cocker spaniel, Lady.

Ms. Lazarus always hoped her show might get picked up by a network or streaming service, and she was vocal about the gender disparity among late-night television hosts.

“Showbiz has notoriously rewarded those who fail upwards,” she told Out magazine in 2018. “If and when Hollywood is ready for a talk-show host with chops, chutzpah, humor, no cavities and a genuine moral compass, will you tell them where to find me?”

In her Times interview, Ms. Lazarus was asked what her own dream job was. She answered definitively.

“What I do right now,” she said. “Hosting a talk show. I found mine, but it wasn’t intentional.”