Home » Entertainment » Bruce Springsteen Is Living in the Moment

Every music fan with blood burning in their veins has felt the sting of missing live shows since March, but the pain has been particularly acute for Bruce Springsteen, an artist who’s spent the past six decades onstage, yet says he’s just now hitting his stride.

“I’m at a point in my playing life and artistic life where I’ve never felt as vital,” he said on a Zoom call from his New Jersey home. “My band is at its best, and we have so much accumulated knowledge and craft about what we do that this was a time in my life where I said, ‘I want to use that as much as I can.’”

Springsteen, 71, was stationed in a small, utilitarian home office with primary-color file folders hanging on the wall in place of flashier décor, to discuss “Letter to You,” his first record with the E Street Band in six years, and an Apple Plus film of the same name that captures the kinetic experience of recording it last November.

“Letter to You” often harks back to a time much earlier than that, though: The elegiac rocker “Last Man Standing” is an ode to the band Springsteen joined as a teenager, the Castiles (and a meditation on the fact that, after the death of his friend George Theiss in 2018, Springsteen became the only surviving member). And three of the album’s songs originated almost 50 years ago, when Springsteen was an unknown, writing florid, Dylan-esque ballads.

“The record is the first record that I’ve made where the subject is the music itself,” he said. “It’s about popular music. It’s about being in a rock band, over the course of time. And it’s also a direct conversation between me and my fans, at a level that I think they’ve come to expect over the years.”

The closest Springsteen has come to picking up a quarantine hobby (“I’m not a big hobby guy”) has been hosting a Sirius XM radio show, “From My Home to Yours,” a project he’s thrown himself into with palpable gusto. He ran to get his laptop to giddily read off a list of artists whose music has been exciting him recently: J.S. Ondara, Mondo Cozmo, H.E.R., Orville Peck, Larkin Poe and Bon Iver, to name a few. (He said he hasn’t yet listened to Taylor Swift’s “Folklore,” but “all I’ve heard is good things about it.”)

Having the time to listen is, at least, one upside of being stuck in place. “I’ve been really enjoying sort of being deeply back into music,” Springsteen said, “almost like I was when I was a kid. I was always in the record store, looking for the next thing.”

These are edited excerpts from the conversation.

Like everyone else, this year hasn’t exactly gone how you’d expected. You’re putting out a record that you can’t yet tour.

Oh, yeah. I think there’s going to be a process before people are comfortable rubbing up against one another again. But if somebody told me, “That’s never going to happen again” — that would be a big life change for me. That act of playing has been one of the only consistent things in my life since I was 16 years old. I’ve depended a lot on it not just for my livelihood, but for my emotional well-being. So if somebody said, “Five years from now, maybe” — that’s a long time. Particularly at my age. I’m 71, and I’m thinking, “Well I know one thing. I’m in the mood right now to burn the house down for as long as I can.”

I take it you saw the people playing “Born in the U.S.A.” outside Walter Reed when President Trump was there earlier this month. How did that make you feel? Decades after Reagan, people still seem to be misunderstanding that song.

I still believe it’s one of my best songs, and when we play it, it just has a cumulative power that remains with it. The pride that people feel as a part of that music is true. But to understand that piece of music you need to do what adults are capable of doing, which is to hold two contradictory ideas of one thing in your mind at one time. How something can be prideful and at the same time call to account the nation that you’re writing about. That was just a part of that piece of music. It’s a song that’s not necessarily what it appears to be.

You got the band back together for “Letter to You.” At what point did you realize it needed to be an E Street Band record?

I knew I wanted to make a record with the band, and I knew I wanted it to be the pure instrumentation of the band: two keyboards, the guitars, the bass, drums and saxophone, and I didn’t want anything else. I didn’t want to demo or have preconceptions of the music, so I didn’t touch the songs until I taught them to the band. My blueprint for what I was doing was basically the two songs that we’d done in the past that were cut completely live, “Darkness on the Edge of Town” and “Born in the U.S.A.,” which is like two takes. So we cut about a song every three hours, we did two a day, and we were done in four days. And on the fifth day, we rested.

Recording wasn’t always that easy for you.

Oh, no, recording used to be hell on earth. I spent years making records sometimes. Even “Western Stars” took a long time. It was not a painful process, but it was a lengthy process.

Aside from the new material, there are three songs on this album that you wrote in the early 1970s. What made you return to them?

I had been working on a box set of music from our vault, so I came across a bunch of those songs that I had recorded for John Hammond, the previous vice president of Columbia Records who discovered me and got me signed. I had done a demo for him in 1972 when I was 22, and these songs were on it, and they were songs I’d written previous to my first record. So I happened to come into contact with that music, and there were a couple of others that I thought might be fun for the band to play.

It’s fun to go back and see how wild my lyric writing was, and how uninhibited it was at a certain moment, and to be able to take that and bring it into the present with the band, and sing it in my voice right now, was a bit of a joy ride. The thing about those songs, every line is insane! And somehow they end up making sense about something. I’m not sure how I did it at the time.

I hear you grappling a lot with spirituality on this record, especially in a song like “The Power of Prayer.”

As I’ve gotten older, I’ve kind of become a spiritual songwriter just by nature, by the things I’ve grown interested in. At the end of the day I’m writing about my own spiritual life, and I’m addressing yours. We make a lot of music that addresses the soul, that’s the nature of our band. Whether I heard, as I say on the record, Ben E. King’s voice, or the Drifters, some of the otherworldly doo-wop of the early ’60s — I just find a great essence of spirit in them. It was something that I wanted to communicate when I wrote my own music. It’s not sort of dogmatic or overblown, there’s no religion in it. There’s just spirit, I hope. 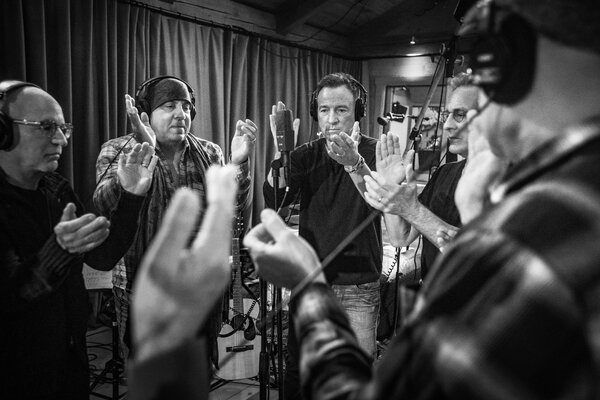 Between your book, the Broadway show, and now the “Letter to You” film and some of the reflections on this album, I get the sense that you’re starting to think about your legacy.

Legacy was on my mind when I was like, a kid. The older you get, the more you realize — who the [expletive] knows! [Laughs] Who knows what’s going to last and not last.

John Sayles, a director friend of mine, said, “I make my movies for right now. I make them for the audience that’s going to come and see them right now and take them into their lives.” Because nobody knows what’s going to happen tomorrow. And I’ve sort of taken that as my mantra the past 20 or 25 years, that my records are for today. They’re for what they’ll do for you right now and that’s where I find the joy in them, and the joy in my audience.

I think the projects that I’ve done that were summational in a sense — the book was, the Broadway show was, even this film — it’s sort of just stopping for a moment and taking stock of what you’ve done and where you are at a critical point in your life, which I think, once you hit 70, you’re there. But I look at it as, that’s what I’ve done up to this piece of my work. I still see vital work ahead.

I just try to find a vein of present energy in what I’m doing and in the language that I’ve learned to make my music both current and relevant at this point on. I think if you keep the inner spirit of what you’re doing alive you remain relevant. I remember playing behind Roy Orbison in 1988, I was surprised at how incredibly present and current his music felt, and it was all because that was the way he was singing it. I realized, it was not old to Roy. It was not nostalgia to him. It was as alive in his heart and in his spirit in 1988 as it was in 1960.

It’s interesting that you made a record and a film that are in some ways both about the primacy of playing live music at a time when we can’t really experience that, and maybe we feel an extra sense of yearning for it.

I grew up in a golden age for rock bands. Back in 1967, if the beach club wanted to hire a band, they had to hire teenagers. And so you played the Elks Club, the firemen’s fairs, high schools, bowling alleys, pizza parlors; you played every place where they could move chairs and create a dance floor on Saturday night. And you played hundreds of those shows.

I really benefited from growing up during that particular period of time. It’s still evident in the ability that the band has to play live. The level of craft that we bring to live shows is a result of playing a thousand nights before I signed a record contract. When I see young bands, I tell them, you’ve got to learn how to play live. It’s still important, and it’s an experience that cannot yet be simulated.

Kirstie Alley gets attacked by celebrities after publicly endorsing Trump