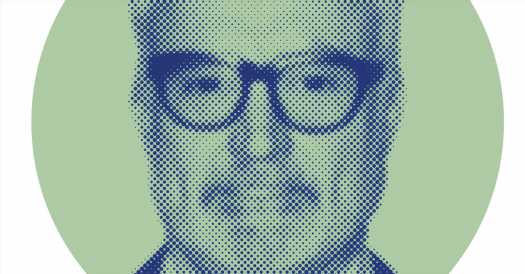 Bradley Whitford Finds Inspiration in the Theater (and Dog Park)

Sometimes an actor’s harshest reviews come from inside his own home. “My son said to me recently, ‘No offense, Dad, but I’ve seen dogs be good in movies,’” Bradley Whitford recalled. “Well, it’s devastating because it’s true.”

But maybe his son isn’t familiar with the full extent of his father’s process.

Yes, Whitford has previously compared Commander Lawrence, his Emmy-winning misogynistic architect of Gilead in “The Handmaid’s Tale,” to Robert McNamara, the secretary of defense who helped escalate the Vietnam War and then struggled with its moral consequences.

But examine Lawrence more closely and you might recognize the unreadable gaze of a Siberian husky, the soulful danger of a mastiff, the Australian shepherd’s keen intelligence.

Because sometimes Whitford trawls for creative inspiration at the dog park, where he spends lots of time with his well-loved rescues: Izzy, a Chihuahua-Jack Russell mix, and Otis, a boxer.

So is Lawrence more bite or bark with June (Elisabeth Moss) in Season 4, which begins on Hulu on April 28, as his humanity begins to peek through the cracks in his formidable facade?

“I don’t think Lawrence is even aware of it,” he said, “but she is leading him.”

Calling from Pasadena, Calif., where he lives with his wife, the actress Amy Landecker, Whitford chatted about his 10 cultural essentials. These are edited excerpts from the conversation.

1. “The Story of Ferdinand” by Munro Leaf My earliest, coziest memories are of my mother reading me that book. I was raised Quaker, and we used to joke that “Ferdinand” was kind of a Quaker bible. My mother used to say that when it came out, it was like a commentary on fascism. But for a young Quaker kid, it was extolling these values of nonviolence and nonconformity. Whenever anybody has a kid, I always get them that book.

2. WTF With Marc Maron Podcast If I could create an area of study that I think should exist, it would be called “creative studies,” where you study the Beatles, the Renaissance, Steve Jobs, Duke Ellington — people’s creative processes. In the meantime, I listen to Marc Maron because he has those conversations. Whether he’s talking to actors, talking to comedians, it’s just a fascinating way to see how these creative people make stuff. Marc Maron is emotionally pornographic. He’s wide open. And because he’s such an open book, everybody opens up to him. I guess I like fearless people because I’m not. He asked me to do a show and I was terrified.

3. Sharon Olds I was driving soon after my daughter was born and I heard someone reading a poem of hers called “Her First Week,” about a baby’s first week. And there’s an image of putting this newborn baby down and how she settles in the crib like a basket of laundry. And it was the most beautiful, true image. I pulled the car over and I was crying, and I started reading all of her stuff. She is so fearlessly intimate and crystalline in her imagery.

4. Dog Parks Anybody who knows me knows I’m completely obsessed with dogs. What’s pathetic is when I was shooting in Toronto and couldn’t bring the dogs, I found myself going to the dog park. This very sweet Canadian woman who I saw there every day came over to me and said, “Which one’s yours?” And I said: “Oh, I don’t have one. I just miss my dog. I’m away from home.” And she stepped away from me, like I was a pederast at an elementary school.

There are roles I’ve played that are combinations of dogs at a dog park. When I had to play Hubert Humphrey [in HBO’s “All the Way”], I realized he was a cross between a corgi and a boxer. I just find a fascinating display of characters at a dog park. It’s like walking into some four-legged mask class.

5. “Aretha’s Gold” My father’s mother was legally blind. She had a record player that came from the Library for the Blind, and I would borrow it. Before every high school performance I would put on “Aretha’s Gold” and lock myself in my room or the basement and turn it all the way up and jump around and sing. And that became a sort of a good-luck warm-up. So when I’m nervous, even to this day, I blast “Aretha’s Gold.”

6. ’92 Theater at Wesleyan University When I was at Wesleyan, it was the place where all the student-initiated productions happened, and it’s where I fell in love with acting. It was this joyous venue that had been a church. I just shot “Tick, Tick … Boom!” with Lin-Manuel Miranda, who felt the same. That’s where he started writing “In the Heights.” It’s just this magical place. When I saw “Hamilton” for the first time, I had no idea the kind of emotional response I was going to have, and I remember after the show I was crying. And I said to Lin, “You turn the theater into a church.” There’s something about the ’92 Theater and the freedom in that place — and how audacious you could be before you were trying to do this professionally — that is creatively nourishing.

7. Yo-Yo Ma His relationship with the Bach Prelude [of Cello Suite No. 1 in G major] is incredible to me. People always say of “The West Wing,” “Are there any moments that stick out?” And for many of us, it was the day Yo-Yo Ma came, and he was playing that piece, and he was the most generous, unpretentious human being. He came out into a room full of probably a hundred background artists, with his extraordinary cello, and he said: “Does anyone want to play this? Does anyone want to hold it?” He’s all about breaking down the lines of hierarchy and pretension in his classical music world.

That day, he was playing that piece and I’m supposed to be having this emotional breakdown. You’re shooting him first, and you have a recording of it, and then at some point you turn around and get to me. He technically doesn’t even need to be there, let alone play it. And take after take after take, he is playing it with his whole heart. It was just astonishing.

8. School Plays I really love watching young people perform and navigate instinctively the dilemma of making a spectacle out of themselves. [Laughs, almost diabolically.] I had a weird moment in seventh grade where I was doing a play and it was like this epiphany. I was like: “Oh my God, this is the only thing I’ve ever done that uses everything. When I’m reading a book, I’m shutting off my body. When I’m doing math, I’m shutting off my heart.” And I fell in love with “this is everything” — this is your heart and your brain and your body. You know, we have all these sports leagues and I really believe there should be acting leagues.

9. “Amusing Ourselves to Death” by Neil Postman It came out 30-some years ago. What he was talking about was how the values of entertainment have distorted the way we conduct public discourse to our detriment. The problem isn’t the obvious forms of fascism — that people are going to start burning books. The problem is people are going to be so distracted they don’t care about books anymore. There’s a big part of the book that says that television is at its most dangerous when it is pretending to be edifying. It’s basically a condemnation of everything that I mistakenly get celebrated for.

10. Ken Burns Documentaries He doesn’t know this, but he’s the only person I’ve ever stalked. I was in New York, and he was walking on the street, and I followed him about 10 blocks. I was doing “A Few Good Men” when “The Civil War” came out, and I remember being blown away by it. But what was striking to me — and I’m contradicting what I said about “Amusing Ourselves to Death” — was this power of visual storytelling to communicate the experience of the Civil War in a way a book could not. And then I watched all of them. And they’re hypnotic to me. “The Roosevelts,” “The National Parks,” “Baseball,” “Jazz,” “Country Music.” I am extremely jealous of everybody who has ever done a voice-over for them. I’m [expletive] available.