Brad Pitt and George Clooney are getting flirty with one another, and we can’t get enough of their playful bromance.

It all started with Pitt’s interview with Vogue last month, during which he was asked who he thinks are the most handsome actors of the past and present. For the past, he named Paul Newman, and for the present, he gave a spirited nod to his Oceans co-star.

“Well, I’ve gotta name that George Clooney f—er, because why not? Usually I’m always taking him out and he’s always taking me out, and this time I’m going to go the other way. Just this once. George? That one’s for you,” the actor teased.

Clooney has been making his rounds at various talk shows this week to speak about the Clooney Foundation for Justice’s inaugural Albie Awards, and he’s been asked to reflect on Pitt’s esteemed compliment more than once.

On Wednesday’s episode of CBS This Morning, Gayle King broached the subject with Clooney and his wife, Amal, and Clooney very modestly said, “Well, he’s right about that. Let’s face it. He’s right.” The Hollywood tycoon went on to tease Pitt, saying “I think the truth is the first time he answered it, he said himself. And they said, ‘Maybe don’t say that. Do another take.’”

The bromance heated up even more later that night when Clooney appeared as a guest on Stephen Colbert‘s The Late Show, during which Colbert showed Clooney Pitt’s interview segment with Vogue. After the video rolled, Clooney paused for a moment with a mischievous expression, then said, “I’m not sure about that.” 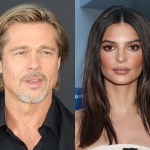 Clooney went on to joke, “I do have some things to say about him and it will include the word ‘f—er’ in it, apparently, since he used that about me.” His sass continued with him agreeing, “I would say that I, too, think that I am the most handsome man in the world.” Clooney immediately began to laugh, and Colbert playfully chimed, “That’s so nice of you to agree!”

Clooney then doubled down on his original belief of Pitt first suggesting himself as the most handsome man, then said with seriousness, “But he is a good friend” and revealed the two have an upcoming movie in the works.

Pitt and Clooney’s friendship goes back several decades, with the two starring side by side in the first three Oceans films as well as Burn After Reading. We’re looking forward to learning what their next project is, but until then, we’ll settle for enjoying their bromance banter.