Bon Jovi’s first ever concerts in China have been cancelled by government officials, the BBC has learned.

No reason was given, but media reports suggest that censors discovered the US rock band had used an image of the Dalai Lama as a backdrop at a gig five years ago.

China has previously banned artists like Bjork, as well as academics and politicians, who have shown support for the Dalai Lama or Tibetan independence.

The band, whose hits include Moves Like Jagger and She Will Be Loved, were also due to perform in China this month. The cancellation of their concerts was linked to a band member tweeting the Dalai Lama to wish him happy birthday in July.

Bon Jovi had been due to play Shanghai and Beijing next week.

The Financial Times reported the Communist party’s Culture Ministry acted after discovering Bon Jovi had performed in front of a picture of the Tibetan monk at a 2010 concert in Taiwan, and had previously tweeted about the spiritual leader.

It said concert organisers AEG were trying to convince officials to relent, but they felt the chances were slim.

Bjork was banned from China for life after she chanted “Tibet, Tibet” during her song Declare Independence at a concert in Shanghai in 2008.

Linkin Park were barred in 2011 after they attended a youth media conference in Los Angeles and were photographed with the Dalai Lama. Prime Minister David Cameron also sparked an angry response from officials when he met with the exiled Tibetan spiritual leader in 2012.

Leaders in China have called the Dalai Lama a “splittist” and a “wolf in monk’s robes”. 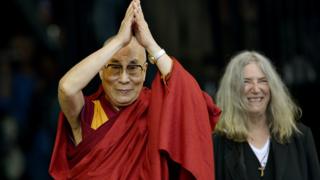 The issue of Tibet is said to be especially sensitive at the moment ahead of the 50th anniversary of the founding of the Tibet Autonomous Region.

A top Chinese official vowed on Monday to “crack down on separatist forces” in Tibet and “fight a protracted battle” against the “Dalai clique”.

Announcing the Bon Jovi shows earlier this year, frontman Jon Bon Jovi had said he was “excited” to be performing in Beijing for the first time ever.

In a recent interview with Chinese state media he described the band’s music as being about “individual freedom and expression”.

Last month, he even recorded a cover of The Moon Represents My Heart, arguably the most famous Chinese love song ever.