Body Wax and Karate Chops: How to Stage a Philip Glass Opera

Everything about Philip Glass’s music seems to exist in extremes. As a listener, you either love it or you don’t. As a performer, you’re either flawless or a failure. Concerts can be transporting, near-religious experiences — or just an endless slog.

The stakes are even higher in his operas, especially the so-called Portrait Trilogy of “Einstein on the Beach,” “Satyagraha” and “Akhnaten” — which, 35 years after its premiere, is arriving at the Metropolitan Opera this month. These are long, meditative and largely plotless works that test the endurance and excellence of soloists and chorus singers, as well as the conductor and orchestra.

“It brings you back to the most fundamental things about your technique,” said the countertenor Anthony Roth Costanzo, who has starred in the title role of “Akhnaten” in all four iterations of the production since its premiere at the English National Opera three years ago. “And if your house is not in order, you’re not going to get through it.”

At the helm of the Met’s production is Phelim McDermott, who staged a mesmerizing “Satyagraha” there in 2008 and has received virtually unanimous praise for this “Akhnaten.” Here’s how he and his colleagues have prepared the opera for the Met. 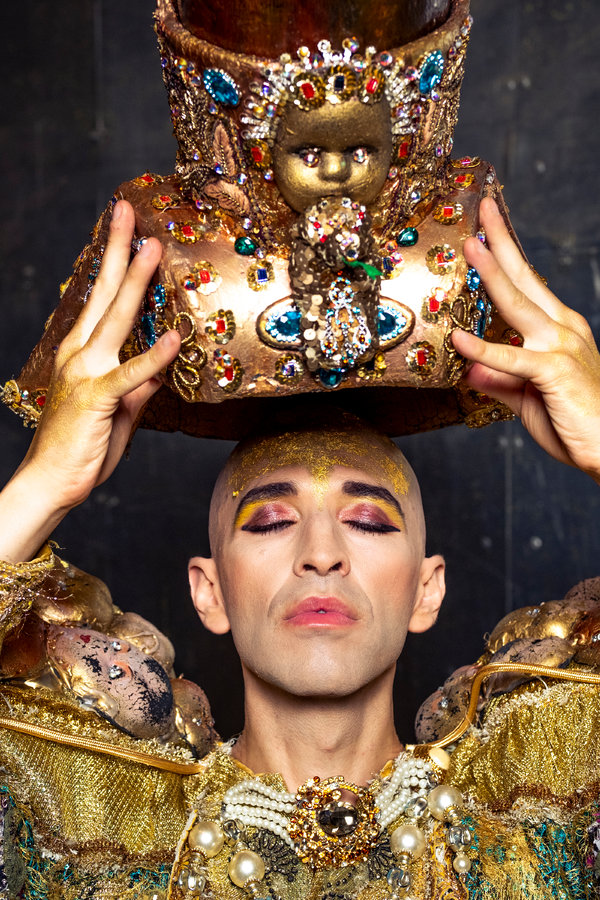 Look for where to relax

If the opera’s many moving parts slip out of alignment, Karen Kamensek — the production’s conductor, and a Glass veteran who refers to his music as “my mother’s milk” — has a simple movement to bring them back together: a karate chop.

It’s a necessary tool with this score, which is more difficult than it looks. The music does, Mr. Costanzo said, give performers a lot of freedom, “because you have to make it come alive.” But it also resists ornamentation; misfires most commonly happen when people try to add to what’s already on the page.

Ms. Kamensek’s karate chop, though, is a reset button — one that everyone hopes to never see. “The more invisible she is, the better,” Mr. Costanzo said with a laugh.

Glass’s music is removed from many conventions of Western music, so Ms. Kamensek has worked with the orchestra to break from tendencies such as lurching toward the downbeat. “This music is strongest when you let the structures speak for themselves,” she said. “A lot of it is about finding where we can relax. When there’s nothing to do, do nothing.”

Don’t be too literal

The “portrait” operas could never be read as rigorous biography; Glass treats each of his subjects poetically, abstracting them for grander meditations. Mr. McDermott’s approach as a director is similar, grazing historical accuracy but never adhering to it.

He described his aesthetic for “Akhnaten” — with costumes by Kevin Pollard and scenic design by Tom Pye — as “a weird fever dream” of ancient Egypt and the Victorians who excavated and fetishized it. “I didn’t want ‘Aida,’ something gold and glitzy,” he said.

Instead, the production is much scrappier, as if assembled from a thrift store shopping spree. The royal robe worn by Mr. Costanzo is adorned with the faces of dolls. If you look closely, you may notice that some of the costumes are made from wet suits.

The singers in Mr. McDermott’s staging are almost never still. But their motion is extremely slow, so he spent his first rehearsals with the cast teaching them movement qualities — a method borrowed from Michael Chekhov — that he said keep them from “looking like robots.”

This ensures that everyone onstage has something to do at all times. And, Mr. Costanzo said, if a movement quality “is all you’re focused on, it gives you plenty of mental space to focus on the music.”

A dozen jugglers — led by the production’s choreographer, Sean Gandini — provide a fleet counterpoint to the singers. “The performers may be doing a slow rhythm,” Mr. McDermott said, “but the juggling can reflect the internal psychological rhythms.”

The challenge has been to make it not mere window dressing, but more like a layer of the music. “I could make movement to Philip Glass all day, it’s so juggleable,” Mr. Gandini said. “So it’s been a question of trimming and trying to take the tricksiness out of it.”

He has even gotten the chorus to take part, as if it weren’t difficult enough to just sing the music. But, Mr. Gandini said, they’re so used to multitasking that it didn’t take long for them to master the skill.

Early in the production’s development, Mr. McDermott asked Mr. Costanzo whether he would be willing to shave his head. “I’m not a real method person,” Mr. Costanzo recalled, “but I thought O.K., it’s just hair: What do I have to lose?”

Then Mr. McDermott had another question: Would he consider entering naked?

Not interested in sensation for its own sake, Mr. Costanzo asked why, and was told that it could form a connection with the audience — seeing this vulnerable, teenage boy taking the throne in a transformation from total nudity to layers of robes and gold.

He said yes to what may be the most outwardly daring quality of the role. Mr. Costanzo has densely furry arms, a full head of hair and the permanent shadow of a beard. It all disappears with each staging of the opera.

There can be no tension when naked onstage, he said. “But if you stare the audience in the eye and release every muscle in your body, they can’t look away,” Mr. Costanzo continued. “And in that moment there’s a kind of reverence that can last for the entire show.”

On a recent Sunday at Haven Spa in Manhattan, he spent a couple of hours having every corner of his body stripped of hair. It’s just one of many ways he has given himself over to what has become his signature role.

“There’s definitely no phoning it in,” he said. “I have to fully commit to it on every level.” That has meant no drinking, a full night’s sleep, a restrictive diet (no sugar or carbohydrates, mostly), rigorous exercise and a lot of turning down invitations.

“You become a different person,” he said. “You contain the rest of your life so that the explosions can happen onstage.”