But as Mr. Cosby spent this Father’s Day in a Pennsylvania prison, serving a three- to 10-year sentence for sexually assaulting a woman in 2004, some weren’t so sure the moniker should still apply.

The posts, on Mr. Cosby’s Twitter, Facebook and Instagram accounts, read: “Hey, Hey, Hey … It’s America’s Dad … I know it’s late, but to all of the Dads … It’s an honor to be called a Father, so let’s make today a renewed oath to fulfilling our purpose — strengthening our families and communities.” Attached was an older video of Mr. Cosby discussing black families and racism in America.

Hey, Hey, Hey…It’s America’s Dad…I know it’s late, but to all of the Dads… It’s an honor to be called a Father, so let’s make today a renewed oath to fulfilling our purpose —strengthening our families and communities.#HappyFathersDay#RenewedOathToOurFamily pic.twitter.com/6EGrF87t6G

Mr. Cosby’s spokesman, Andrew Wyatt, said in a statement that the entertainer had requested a Father’s Day message be sent from his accounts.

“When I visited with Mr. Cosby on Thursday, he was overviewing his Father’s Day message that he was excited to give to a support group in the institution called ‘Man Up,’” Mr. Wyatt said. “Mr. Cosby spoke to these men who have been incarcerated for many years, but are up for parole soon,” about removing the “dis” from “disadvantage” and focusing on the advantage.

“That advantage is to be better fathers," Mr. Wyatt said, “to be productive citizens and to remember Never Again, which means, Never Again should you enter this gates to this plantation, because this is the new form of slavery.”

“Unfortunately," Mr. Wyatt continued, “media focused ‘only’ on a handful of negative comments, but refused to publish the thousands of positive comments.”

One woman who testified against Mr. Cosby at his trial in April 2018, Janice Baker-Kinney, said she checked Mr. Cosby’s Twitter account on Monday morning when she saw his name was trending online. She found the account had blocked her — something she said she wears as a “badge of honor.” 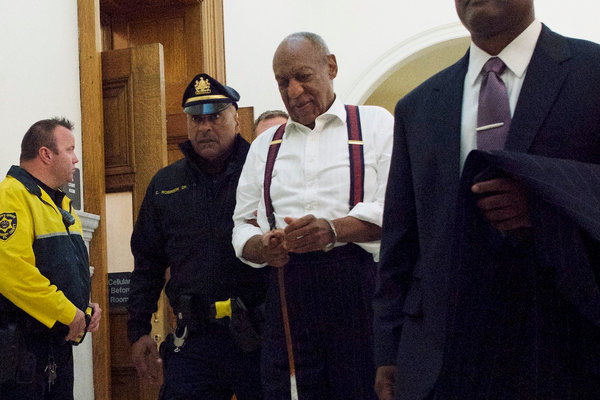 “I see America’s Rapist is trying to stay relevant by posting as America’s Dad,” Ms. Baker-Kinney said in a statement.

Other Twitter users seemed to agree. Responses included perplexed GIFs and replies that the “America’s Dad” title was no longer something he should claim.

“It’s laughable that he actually believes he has any right to encourage others to be good humans when he has not accepted responsibility for decades of his own deceit and depravity,” Ms. Baker-Kinney added.

Some of the other women who testified at Mr. Cosby’s trial didn’t immediately respond to requests for comment.