Home » Entertainment » ‘Between the World and Me’: From Page to Stage to Screen

‘Between the World and Me’: From Page to Stage to Screen

Back in August, when Covid-19 had loosened its chokehold on New York City, the director Kamilah Forbes and various cast and crew members gathered in Central Park for a location shoot, one of the first the city had allowed. It was the final week of filming for “Between the World and Me,” a television special based on Ta-Nehisi Coates’s memoir, a meditation on the history and lived experience of Black people in America.

Near the park’s Ramble, an actress dressed as Amy Cooper — the white woman who in May called emergency services to complain, fraudulently, that a Black bird-watcher had threatened her — played with a three-legged dog. A Covid coordinator distributed nitrile gloves and squirts from a tub of hand sanitizer. Hairdressers and makeup artists hovered in plastic ponchos and face shields. A production assistant safeguarded a wheeled cart piled with camera equipment.

Officials from the Central Park Conservancy, two of whom stood muttering nearby, had approved the shoot with the stipulation that it not block any pathways. So other assistants had to urge passers-by not to walk in front of the camera. At least a dozen people, mostly white, refused, disinclined to allow the production team — mostly people of color, mostly women — to claim the space they needed. Which felt like a metaphor.

“Between the World and Me,” an amalgam of animation, music, archival video and monologues, will premiere on HBO on Saturday. An 80-minute special with a superlative cast — Oprah Winfrey! Mahershala Ali! Angela Davis! — it has the grave and unenviable responsibility of illuminating the violence of systemic racism for millions of potential viewers. It asks of them all, even the ones who won’t get out of the way, what the book’s narrator asks of his son: to become conscious citizens of this beautiful and terrible world.

“Between the World and Me,” a slim volume framed as a letter from Coates to his teenage son, Samori, arrived on bookshelves five years ago. Coates still wonders if it should have stayed there. After publication, he fielded plenty of requests for stage and film rights. For the most part, he declined them.

“You can’t put a book onstage,” he said, speaking by telephone in late October. (A film of his novel “The Water Dancer” has since been announced, proving him at least a little wrong.)

Then Forbes, the executive producer of the Apollo Theater and a friend from their Howard University days, approached him. She wanted to transform the book into a kaleidoscopic performance piece, a choral work that would translate one man’s words into a collective Black American experience. “The exciting challenge was always how do we take this singular story to make it every man’s story, every woman’s story,” Forbes said. 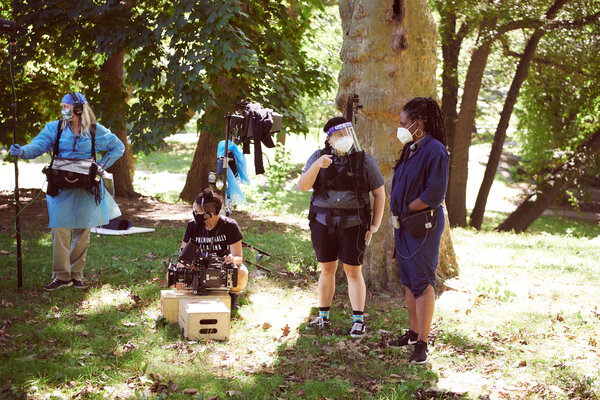 The stage version debuted in 2018, first at the Apollo, then briefly at the Kennedy Center. “The entire endeavor represented an extraordinary convergence of institutional resources and artistic talent,” a critic at DC Metro Theater Arts wrote. And that, with the addition of a one-night stand at the Atlanta Symphony last year and a further weekend at the Apollo, would have been that. But this past spring, as Covid-19 continued its spread and the deaths of George Floyd and Breonna Taylor galvanized Black Lives Matter protests, the dynamic changed.

During lockdown, Coates, Forbes and the actress Susan Kelechi Watson, another Howard graduate, met on Zoom for a weekly game night. In between rounds of the pen-and-paper game Celebrity, Watson, who had performed the piece at the Apollo, suggested a new, more serious pastime. She proposed reimagining “Between the World and Me” as a Zoom reading.

“I was looking for a way to express what I was feeling,” she said. “His book was a lot of what I wanted to say.”

With a tentative yes from Coates, Watson reached out her agent. Her agent contacted other agents. Angela Bassett and Courtney B. Vance signed on. So did Tariq “Black Thought” Trotter, Yara Shahidi, Phylicia Rashad and 20 or so other actors, musicians and activists. “Folks were really eager and anxious to be a part of something that had meaning in this moment,” Forbes said.

The project piqued the interest of various networks and streamers. “That’s when it was like, ‘OK, well, this is going to be bigger than a Zoom reading,” Forbes said.

A film version already existed. While making the Emmy-winning documentary, “The Apollo,” Roger Ross Williams had recorded the stage version. But Forbes had always envisioned the piece as a vital response to current events, which meant a new version was required, even as the pandemic prevented most conventional filmmaking.

“So then it really became, ‘OK, if our biggest challenge is Covid, how do we start to structure this in a way that we can be as safe as possible?’” Forbes said.

HBO had already experimented with remote shoots for the special “Coastal Elites.” With the network’s help, and with Coates, Williams and Watson onboard as executive producers, Forbes devised a plan in which she remotely directed skeleton crews (and actors) in New York City, Los Angeles, Atlanta and Washington. Typically, she observed from a monitor, talking the performers, some of whom she had never met in person, through the speeches. The three-week shoot allotted about three hours per monologue.

A few days after the Central Park shoot, Forbes sat on the terrace of her Brooklyn apartment, as sunset striped the sky. She watched the actor Wendell Pierce, who was in Atlanta, from her laptop.

“Direct me,” he said, and Forbes obliged as best she could from nearly 900 miles away. But the connection to the camera kept dropping. Onscreen, technicians in protective equipment scurried in and out of Pierce’s room, trying to fix it.

An hour later, with the sky fully dark, Pierce began again. When he trained his liquid eyes on the camera and said, with love and sorrow, “Dear son, I’m telling you this in your 15th year,” the distance and the difficulties seemed to fall away.

Pierce had worried about the technology. “I never thought I could actually connect to the scene on the Zoom or video chat,” he said. “But the humanity is always there.”

Forbes had worried, too. “You want to be there with your actors,” she said. “You want to be able to walk up and have that conversation between takes. Meanwhile, when I can be with actors, I’ve got P.P.E. on, a mask and a face guard and like a freaking cape.” Some intimacy had been lost, she said.

But intimacy had been found, too. Michelle Wilson, an actress who had been with the project from its theatrical beginning, filmed her monologue in her Harlem home and felt that those familiar surroundings helped to deepen her performance.

“Our homes, and the intimacy of our homes, it felt actually very appropriate for the material,” she said.

Onstage, the performances had been bigger, appropriately theatrical. During this shoot, the experience of speaking only to the camera made the acting more concentrated and refined. “It took some of the performative aspect out of it and made it something that came from our hearts,” Watson said.

Members of the crew and production staff also felt a personal connection to the work. Williams recalled an early production meeting via Zoom and the sensation, unique in his film career, of seeing so many Black faces looking back at him.

“All of us were each used to being the only Black person in the room,” he said. “I realized that we had been starved of each other and our shared experience.”

That experience informs each scene. The actors aren’t playing characters, they’re not even playing Coates. Instead, each speaks Coates’s words while connecting the language to their own memories, addressing themselves to a son, a brother, a cousin. Wilson thought of her daughter, Pierce of his nieces, Watson of the men in her family.

While Coates had signed on as an executive producer, he hadn’t wanted to appear in the film. “The words are old, you know what I mean?” he said. “They’re not what I would write today.” But Forbes asked him and trusting her again, he agreed.

In August, he took a Covid test, quarantined for a few days after, then presented himself at a studio in Soho and “banged it out,” he said. Viewers can hear his voice at the end, saying, “And still I urge you to struggle.” He also provided audio from an interview he had conducted with Breonna Taylor’s mother, Tamika Palmer.

Initially, Forbes had thought that the special could run before the presidential election. But the timing of production and postproduction wouldn’t allow it, she said in an October telephone interview. Besides, she knew that the piece would remain pertinent no matter who won, that the struggle for Americans of color to be afforded the same privileges and protections as white Americans goes on.

“The unfortunateness of our world is that this piece is necessary before November 4, and after, regardless of what happens,” Forbes said. “We’ll still be urgent and relevant.”

Sideswipe: November 19: Shovel-ready? Not on your spade