Is it a dance of death? A fantasy to become someone else? The solo that ends Claire Denis’s film “Beau Travail” spotlights the repressed, tightly wound Sergeant Galoup in ways we have never seen him before: loose, relaxed, carefree.

His dance twists things up: Who is this Galoup? At this point in the film, about a group of French Foreign Legion soldiers, Galoup has been dismissed from military service — and just moments ago he did not seem to be dealing well. He was lying on his neatly made bed with a gun in his hand as the camera panned over his tattoo: “Serve the good cause and die.”

While Galoup’s solo is the film’s most obvious dance moment, a singular choreographic consciousness runs throughout “Beau Travail” (1999), recently restored by the Criterion Collection. Throughout the movie, loosely modeled on Melville’s “Billy Budd,” bodies, more than words, tell the story. 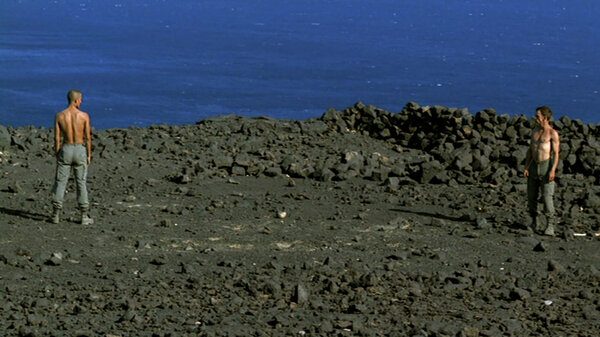 Galoup’s downfall is brought on by his jealousy and obsession with and a beautiful young man in his unit; his suicide seems imminent. But in the dance, Galoup, played by Denis Lavant, transforms into a new body, one overflowing with life. As louche as Serge Gainsbourg but with the daredevil precision of Mikhail Baryshnikov, Mr. Lavant uses his primal, low-to-the-ground physicality as a way to release Galoup’s pent-up emotions, which seep out of his skin through movement.

The dance begins on his bed with a close-up of his pulsing biceps and the faint, opening beat of Corona’s “The Rhythm of the Night”; a moment later, he is transported to a nightclub. With one arm stretched up the side of a mirror twinkling with magenta lights, he takes a drag on his cigarette and edges his way toward the center of the dance floor where he walks in small circular steps as if marking his territory.

He spins suddenly and kneels, taking his time. He sways his arms and spins again, but this time in the air. His limbs loosen in gangly, euphoric freedom. Even after a brief interruption by credits, Mr. Lavant returns to spring up like a fish popping out of the sea before crashing to the floor with a splash and then rebounding.

For nearly 90 minutes in the film, Galoup’s body has been fixed and hard. Who is this untamed person, seemingly drunk on life, we see in the dance? Mr. Lavant, in a Criterion interview, said he viewed his dancing self as “a projection of who Galoup might wish to be.”

The decision to place the sequence at the end of the film came during the editing process. “In the script, it was because he was leaving for good,” Ms. Denis said in another interview. “He wanted to go to the bar for the last time. He starts dancing like the last dance of his life.”

Mr. Lavant told Criterion that he improvised the dance, which was shot in only two takes. (His rolling-off-the-floor exit came in the second take, “Just to get off camera quickly!,” he said.) But this extended solo wasn’t his only dancing moment in the film; what made the role fun for him, he said, was the way he used his physicality to shift from realism to fantasy.

“We see Galoup walking at night among the barracks, and I’d take a little step or something,” he said, adding that it was “almost like dancing. That wasn’t in character.”

Mr. Lavant, who trained in the circus, is a natural mover: Remember his sprinting dance in Leos Carax’s “Mauvais Sang,” in which he runs to David Bowie’s “Modern Love”? (Frances Ha enjoys a dash down the street to the same song, too.) In “Beau Travail,” he isn’t alone. The actors playing legionnaires include the film’s choreographer, Bernardo Montet, as well as a boxer, an opera singer and dancers. In an email interview, Mr. Montet said his job was to “release the poetic power” of their bodies.

“With the dancer, as with the legionnaire, there is this idea of sacrifice,” he added. “Also this relation with the death: For one, it’s real and for the other one, it’s symbolic.”

Neither, in other words, belongs in ordinary society. Mr. Montet sees the dancer in Galoup as a shaman who has “nothing to do with the show world, dance as an entertainment.”

The choreography of the group is as important as the landscape — Djibouti, in East Africa — which frames the men with the turquoise blue of the sea, the azure sky and the dusty earth. Military drills in which the men climb over walls or crawl under wires flash by with speed and efficiency; but even those moments of action — seemingly everyday or pedestrian — can be deceiving, changing meaning the longer we watch. In one moment, the men stretch on the ground, one leg forward and the other bent behind — it’s as easy to see them as dancers limbering up as soldiers in training. But when they recline all the way with their arms raised overhead, the image takes a tragic turn; their bodies, limp and sprawled out, are lifeless.

There’s a purposeful double-sidedness, as if what’s living within their muscular prowess is as unpredictable as Galoup’s nightclub dance. In one striking scene, dry grass blows in the wind and silhouettes give way to actual men, standing bare chested with their arms raised and eyes closed. They are still as the breeze moves them; they meld with nature, they become it.

Mr. Montet said that when Ms. Denis was looking for locations to shoot in the desert, she was inspired by the movement of the grass and asked him to create what he calls the “grass dance.”

“It’s a way to show their vulnerability, their fragility in these killer bodies,” Mr. Montet said. “They give their body to nature, to death, and they do it with full consciousness.”

There are duets, too, like when the soldiers embrace and retreat — their chests smack hard yet their eye contact and the quick squeeze, a millisecond, just before parting reveals something about their faith in their profession and in each other. “In a hug, you can give all your being,” Mr. Montet said. “To love is to surrender.”

But surrender is not a part of a legionnaire’s mentality. The circling duet, this one more predatory and ominous, is a face-off between Galoup and Gilles Sentain (Grégoire Colin), the young legionnaire he is both repelled by and attracted to.

They start standing apart on a cliff overlooking the sea and eventually take careful steps, moving clockwise as the gap shrinks between them; the wide shot switches to a close-up, first of Galoup, then of Sentain, who radiates innocence even in aggression. The shorter, stockier Galoup peers up at him, his lips grim and downturned.

Their relationship is told through choreography, but instead of using their fists, this battle builds through tension. They never touch. What I didn’t notice the first time I saw the film is that in his final dance, Galoup — though alone and lost in his own world — actually dances as if someone were standing before him, and he reacts to every move of that phantom partner: Sentain.

There are reverberations from their duet, from the methodical opening steps to the circling pattern. But in the solo, Galoup’s gaze, while intent, isn’t hard; his lips part, softening his mouth. He is more animal than human as he goes from being the watcher — which he’s been through much of the film — to the watched.

How powerful can a dance be? Galoup spent most of the movie obsessing over someone else, but his dance flips that story. Through his wild metamorphosis, he becomes an object of obsession — ours. It was just the right dance at just the right time.