Bafta will conduct a “careful and detailed review” of its voting system due to the “infuriating” lack of diversity in this year’s nominations, its film committee head has said.

All the acting nominees on Bafta’s list are white and no female directors were nominated.

Bafta’s Marc Samuelson told Variety the review will be carried out “within and outside the membership”.

He said “everyone who has a view will be heard”.

He added that any changes agreed upon will be “in place in time for voting for the 2021 awards”.

Amanda Berry, Bafta’s boss, said she was “very disappointed” by the lack of diversity.

Samuelson also told Screen Daily: “Bafta has been pretty clear that like everyone else it was not happy with the results of the vote.” 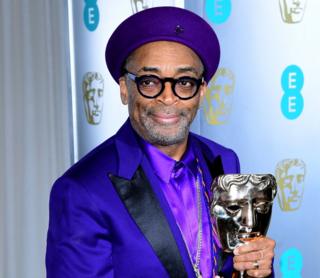 This year’s nominees were led by Joker with 11, followed by The Irishman and Once Upon a Time… in Hollywood.

But the nominations drew strong criticism on social media, with #BaftasSoWhite trending.

Cynthia Erivo, who stars in the film Harriet, told Variety: “It’s disappointing to see that we’ve got to this point in time and we’ve had such wonderful advancement in inclusion and diversity, and the films this year were beautiful, such wonderful stories told, and to not have that represented in an awards show like the Baftas is just disappointing really.”

But Bafta member and actor Nicholas Young, in a letter to the Daily Telegraph on 9 January, wrote: “As a voting member of Bafta, I take exception to the suggestion that my choices are based on anything other than excellence in each respective field.

“This year, there have been a number of brilliant performances by actors and actresses of many racial backgrounds.

“There have also been a number of films made by and starring predominantly black talent. Excellent though these have been, the most outstanding films and performances this year, for the most part, those appearing on the recently published Bafta shortlist.”

He added that during his early career he “formed a talent agency with a black, female partner, representing clients from a range of ethnic backgrounds” and that he has been “happily married to a black Jamaican for the past 30 years”.

On Friday, Young told the BBC the negative reaction to this year’s list was “slightly hysterical”.

He cited last year’s Baftas as evidence that the organisation supported diverse talent, when awards were given to Rami Malek, Mahershala Ali, Spike Lee, Letitia Wright and the film Roma, while Viola Davis was also nominated.

“There are so many factors to consider about voting,” he said. “Firstly we’re sent screeners [of the films to watch at home] and they don’t come until late November. We have an awful lot of films to watch in a short space of time. A lot are not my cup of tea, so you have to give it half an hour and see it how it goes – it if it doesn’t grab you have to move on or you run out of time.

“Joker wasn’t my cup of tea but the performance was riveting – you’re drawn into it. Fine acting is like fine sportsmanship, I may not like a particular sport but at the Olympics, when you see it, it’s riveting.

“This year’s nominations were just the way the dice fell. There happened to be a lot of good films of a very high standard of entertainment, but very few of them had black talent.”

He added that films with a predominantly white cast such as Downton Abbey and Bond films don’t make the grade for Bafta either.

“Downton Abbey was very pleasant and sugary but it’s very difficult to find really moving performances in it, it’s not that sort of film, it’s just light entertainment. Bond films are just pure entertainment on a level everyone expects.”

But when the Bafta nominations were announced, director Rapman, whose controversial film Blue Story was overlooked except in the rising star category, wrote: “The lack of of black faces is ridiculous.” Film director Nadia Latif agreed, as did film critic Guy Lodge.

It said films would not be nominated for best British film or best British debut unless they met at least two of four “diversity standards”, which cover on-screen talent, storylines, creative leadership, training and underserved audiences.

We Made Joey’s Meatball Sub From the Friends Cookbook—Is It the ‘Greatest Sandwich in the World?’