Home » Entertainment » At the Avignon Festival, a Bleak Start 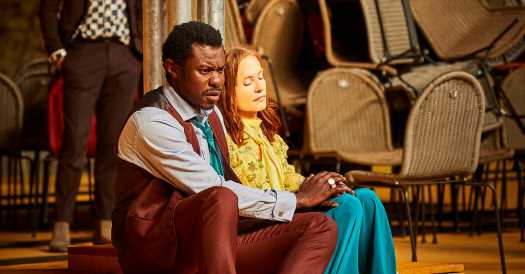 At the Avignon Festival, a Bleak Start

AVIGNON, France — The Avignon Festival couldn’t have set the stage any better for Tiago Rodrigues. On Monday, the director from Portugal was announced as the next director of the event, one of the most important on the European theater calendar. The same night, his new production of Chekhov’s “The Cherry Orchard,” starring Isabelle Huppert, opened the 2021 edition, which runs through July 25.

Excitement was high, despite the enormous line to enter the Cour d’honneur, an open-air stage installed on the grounds of Avignon’s Papal Palace. The French government requires proof of vaccination or a negative coronavirus test for all events with more than 1,000 audience members, and the checks led to a 40-minute delay and grateful applause when the preshow announcements finally started.

Two hours later, the reception was noticeably less warm. While Rodrigues has brought well-liked productions of “Antony and Cleopatra” and “Sopro” to Avignon in recent years, his “Cherry Orchard” is an oddly amorphous proposition, built around actors who often seem worlds apart onstage.

It doesn’t help that Huppert plays Lyubov, the aristocratic landowner who remains blind to her family’s financial plight, like a close cousin of Amanda Wingfield in “The Glass Menagerie,” which she just performed in Paris. She brings the same diction and the same childlike, brittle energy to both characters, down to her trembling lips. 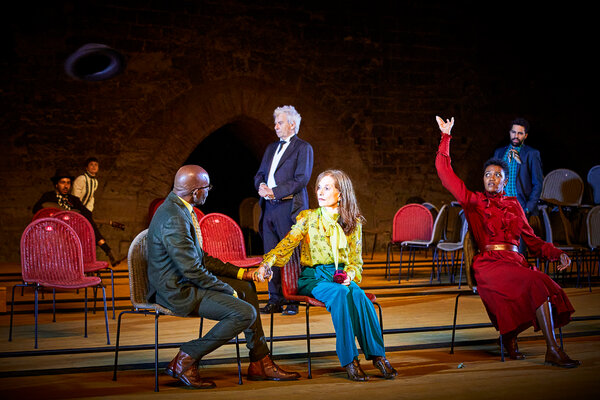 The production accommodates Huppert rather than the other way around, and doesn’t require her stage partners to blend in, either. Rodrigues hasn’t enforced a specific acting style, and the community at the heart of “The Cherry Orchard” never really coheres.

A few performers make the most of it. In a welcome departure from French habits, Rodrigues opted for colorblind casting: Lyubov’s relatives are all played by Black actors, as is Lopakhin, the self-made man who ultimately buys Lyubov’s estate. In that role, Adama Diop is by turns forceful and sympathetic. The role of the aging Firs, who yearns for the glory days of the aristocracy, is taken with lovely lightness by a veteran of the French stage, Marcel Bozonnet.

In lieu of Lyubov’s beloved trees, the stage is filled with the Cour d’honneur’s old seats, which this year were replaced with new wooden ones. There is even a heavy-handed number about the renovation — one of several interpolations to Chekhov’s text — from Manuela Azevedo and Helder Gonçalves, who provide live music throughout.

“Things will change,” Azevedo sings. “Even these chairs changed places.” It’s a nice touch, but here as elsewhere, this “Cherry Orchard” is too anecdotal to say much about the world. Rodrigues will presumably return to Avignon in 2023, the first edition he is scheduled to oversee. Let’s hope for a little more insight then.

“The Cherry Orchard” aside, this year’s lineup finally gives women some prime spots, after years of male-skewed programming under the current director, Olivier Py. The premiere of “Kingdom,” by the Belgian director Anne-Cécile Vandalem, suffered its own delay because of heavy rain, but those who waited were rewarded with the festival’s finest new work up to that point.

“Kingdom” is the conclusion of a trilogy Vandalem started in Avignon with “Tristesses” in 2016, followed by “Arctique.” The overall theme of the three plays is “the end of humanity,” according to the playbill, and after tackling far-right extremism and global warming in the first two, Vandalem offers a bleak tale of utopia gone wrong in “Kingdom.”

In it, two families have opted to forgo the modern world and return to nature. Yet they come to resent one another because of land disputes and perceived slights, and their sustainable way of living becomes untenable.

Vandalem is fond of weaving video into her work, here by way of cameramen ostensibly filming a documentary about one of the families. They follow the central characters into their small cabins, which are visible and surrounded with trees and water onstage, yet closed to the audience.

Intimate moments are seen only on a large screen, and this setup draws the audience into the characters’ lives with greater realism than is achieved by many plays. The cast sustains the narrative tension with understated force — all the way to the unraveling of their small world.

“Kingdom” was far from the only bleak offering of the festival’s early days. The Brazilian theatermaker Christiane Jatahy also returned, with “Between Dog and Wolf,” a creation freely inspired by Lars von Trier’s 2003 film, “Dogville.” Nicole Kidman’s role onscreen as an outsider mistreated by the community in which she seeks refuge is taken here by the actress Julia Bernat, also of Brazil.

The cast is constantly filmed, with less precise editing than in “Kingdom,” and most of “Dogville’s” twists and turns are recreated, but Jatahy also finds some distance from her source material. Bernat and others address the audience directly at several points, and they break character to explain the movie’s ending. After that, they elaborate on what they see as the rise of fascism in Brazil and elsewhere.

There is dark subject matter, and then there is “Fraternity,” Caroline Guiela Nguyen’s much anticipated follow-up to her 2017 hit, “Saigon.” “Fraternity’s” supernatural premise is similar to that of the HBO series “The Leftovers”: a portion of humanity (in “Fraternity,” 50 percent) has simply vanished, leaving their loved ones reeling.

Unlike “The Leftovers,” however, “Fraternity” is in no way subtle in exploring grief. Over three and a half hours, it drains and badgers viewers emotionally: Many around me cried at least once. After so many people have died of Covid-19 in the past year and a half, this is dangerous territory, and Guiela Nguyen addresses people’s sense of loss like a bull in a china shop.

The action takes place in a “Center for Care and Consolation,” designed for survivors to process grief by leaving video messages for the departed. These are performed by a laudably diverse group made up of professional and nonprofessional actors from around the world. (Multiple languages are spoken in “Fraternity,” with rather clumsy live translations by other performers.)

Perhaps because the amateurs are still finding their feet, the acting often feels one-note, with much yelling and little in the way of emotional arcs. The plot revolves around the idea that people’s hearts slowed almost to a halt after the Great Eclipse, as the disappearance is known, which in turn slowed down the universe. Some related sci-fi developments soon grow silly, especially when an oversize plastic heart is brought in to absorb the survivors’ memories of their lost partners and relatives, in a bid to keep the planets moving.

At least Guiela Nguyen didn’t hold back on what was an ambitious, humanist project, and it’s a treat to again see Anh Tran Nghia, the star of “Saigon,” even though she’s underused. But theatermakers also have a duty to take care following a real-life tragedy. Bombarding the audience with relentless pain doesn’t necessarily lead to catharsis, and we’ve all been through enough.