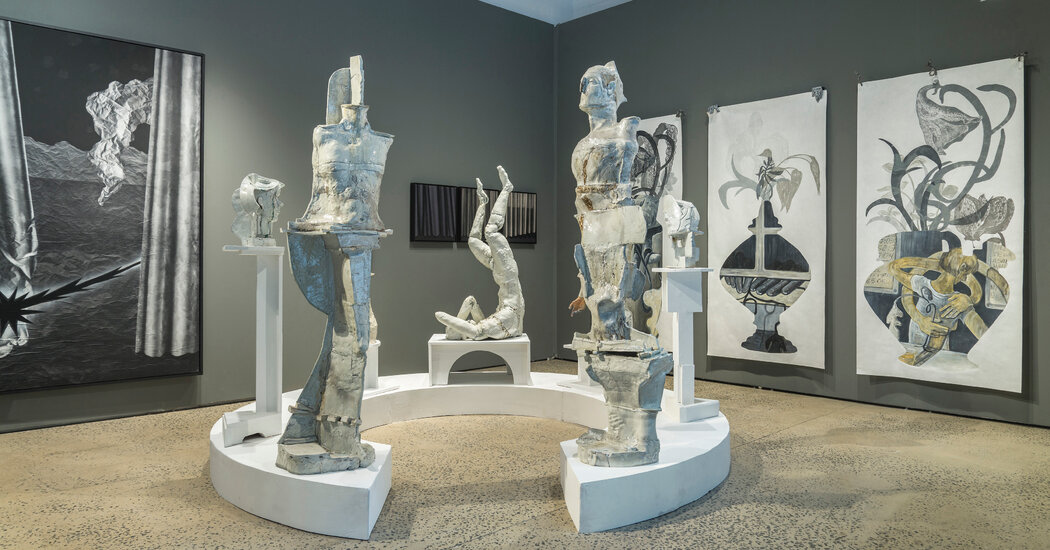 New York’s newest art fair, Future Fair, intends to serve as a change agent — toward “an art market where people are collaborating and co-curating,” said Rachel Mijares Fick, who co-founded it with Rebeca Laliberte.

The fair, which holds its first in-person edition at the Starrett-Lehigh Building in Chelsea, is compact, with 34 galleries — and just 16 large booths, as presenters have been paired (in two instances, tripled) and encouraged to combine forces, on logistics or on a joint artistic offering. “You could be on an awkward date,” said Benjamin Tischer, of New Discretions, quickly adding that his booth-sharing, with the Istanbul gallery The Pill, was going just fine.

The Pill has the fair’s standout: the fast-rising French painter Apolonia Sokol’s lucid, generous seminude portraits of women, cis and trans, of various races; all of them are people she knows. Her art wears its plural feminism with ease. Tischer is showing ceramic vases scrawled with splendidly neurotic verbiage by the New York artist Cary Leibowitz, plus paintings of glassware and distorted faces — a little spooky, a little kitschy — by Jacopo Pagin, an Italian artist with whom Tischer bonded over Instagram.

The most realized duo joins the New York galleries Swivel (Bedford-Stuyvesant) and Trotter & Sholer (Lower East Side) — both founded since the pandemic. Their presentation reads as a unified show. A circle of porcelain sculptures by Derek Weisberg anchors the space: The figures channel Greek Classical melancholy and line-drawing sharpness, and the pedestals are studies in arrested decay. Mixed-media works by Pajtim Osmanaj, from Kosovo, and Luján Pérez, from Spain, augment the somewhat Gothic gravity. It’s a fair booth, but you want to stay.

TERN gallery, from Nassau, the Bahamas, is also new, but has New York art-world genes: its director, Amanda Coulson, co-founded the VOLTA fair. TERN, she said, aims to bury Caribbean “coconut art” clichés with abstraction, new media, conceptual photography. Drew Weech’s dark-on-dark canvases, in which imagery mined from the artist’s Bahamian memories nearly disappears, make the point. TERN’s boothmate, Samsøñ, from Boston, has works on paper by Azita Moradkhani and photography by Nona Faustine, Mariam Ghani and Elia Alba. Three sculptures by Alba are special: Each is of a pair of life-size hands made of fabric, adorned with crystals and silhouette transfers — percussive and haunting.

Other highlights include Richard Beavers Gallery, from Bed-Stuy, continuing its rise with a magisterial presentation (with Ilèkùn Wa) of paintings by Marcus Jansen that address financial predation in the South Bronx. Elijah Wheat Showroom, in Newburgh, N.Y., has strangely winning dry-erase board works (and a neon sculpture that emerges from a toaster) by Clive Murphy. Works in Tammy Nguyen’s exquisite “Seasons of Revolution” paintings, in which Southeast Asia’s vegetation overwhelms techno-statist development schemes, stand out at Hesse Flatow.

The pandemic scrambled Future Fair’s plans more than once, but the result is pleasantly off-kilter. It’s underground-cosmopolitan, with out-of-town participants from unusual locations, but also hyperlocal, built on a core of New York alternative players with a mutual-support ethos. Prices are transparent, listed online. The fair has committed to share profits with a charter group of galleries — if it makes any profit at all, of course.

For now, the fulfillment is in getting together. “I’m excited to be in a small, new fair,” said the gallerist Asya Geisberg, who opted against a solo display in favor of jamming in five artists. “I’m so hungry to have human beings look at art,” she said. “There’s no need to hold back.”

Through Sept. 12 (online presentation continues through Sept. 17) at 600 West 27th Street, Chelsea; futurefairs.com. All visitors must be masked and show proof of vaccination.

The Truth About Ryan Reynolds And Sandra Bullock’s Friendship
Entertainment