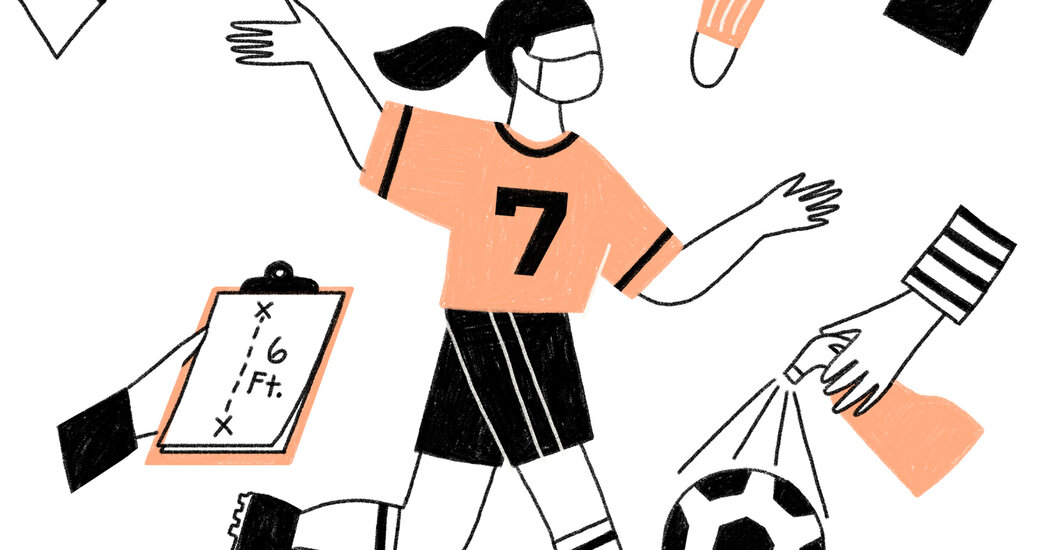 Are Spring Sports Safe for Kids?

Leila Manuel is rarely without her soccer cleats. The 10 year old does drills at a field near her home on days with no practice and wears her club soccer jacket everywhere.

“She identifies as being an athlete,” said her mother, Solmaz Manuel. “Soccer is her favorite thing.”

For many athletic kids like Leila, the last year of social distancing has meant sidelining not only school and friendships, but also sports. For five months, Leila’s San Francisco team canceled practice altogether. Then it was another six months of no-contact drills.

Last week, though, Leila finally got to scrimmage again — the beginning of what she hopes will be a normal spring season.

Following a year of stops and starts and changing levels of Covid-19 precautions, many youth players are back on the field and court this spring. And the safety measures that teams are taking vary widely.

Earlier this month, the American Academy of Pediatrics updated its Covid-19 guidance on returning to sports and physical activity. In this latest version, the guidelines place more emphasis than previous versions on avoiding shared travel and meals, after a joint study by the N.F.L. and the Centers for Disease Control and Prevention showed transmission during both.

But most of the advice hasn’t changed: maintain distancing and wear masks when six feet isn’t possible. Disinfect equipment and “prioritize non-contact activity such as conditioning and drills.” And to transition gradually into high-intensity exercise to avoid injury.

So what are coaches and parents doing to keep sports safe this spring? And how are they prioritizing safety without compromising the things that make sports so important: social connection and fitness, but also fun?

The Spectrum of Safety Measures

In San Francisco, Leila’s soccer club, Girls Unite, is taking careful precautions. Coaches, spectators and kids all wear masks, even while playing. Parents are distanced on the sidelines, and players must fill out digital health forms before each practice and game.

“Parents are entrusting me with their children,” said Lindsay Kauffman, Girls Unite’s founding director. “It’s absolutely my responsibility above and beyond any game to make sure their kids are happy and healthy.”

In Frisco, Texas, on the other hand, a Little League game looks no different than it did five years ago, said Andrew Rah, a recreational youth soccer and baseball coach. On his 7-year-old son’s baseball team, all masking and social distancing requirements have been dropped. Parents sit in the bleachers unmasked.

“The feeling around here is that outside is safer than inside and baseball is a totally outside sport,” Rah said. “We’ve been happy with the way sports have been run here, and happy with the normalcy we’ve been able to have compared to a lot of other places.”

There are many factors to consider when making decisions on sports and safety, said Sankar Swaminathan, the chief of the division of infectious diseases at University of Utah Health and a member of the medical advisory committee for the Pac-12 Conference, one of the five major Division I conferences in collegiate sports.

“Where’s the worst place you can be?” Dr. Swaminathan said. “In a small bar with a lot of people without a mask who are talking and singing. And the best place you can be is by yourself on a mountaintop. Every other activity lies somewhere between those two.”

When making decisions about sports and safety, parents and coaches should consider transmission rates in their community, the safety protocols the sports league is taking and whether the activity is outdoors. Consider also the risk to society, including other kids with compromised immunity, he said.

Playing volleyball and soccer outdoors and masked is relatively low risk, Dr. Swaminathan said. Same goes for sports with minimal contact, like cross country, swimming and tennis. Indoor basketball is higher risk, he said, but if people are masked, and there’s no crowding in the showers or locker rooms, that risk goes down.

Eric Worley, co-founder and program director of Philadelphia Youth Basketball and Philly Triple Threat, a sports-based youth development program serving young people from underserved communities, also requires his players to mask up at all times, even on the courts, which are indoors. Early on, players were uncomfortable wearing masks while playing, he said. “But as time has elapsed, it’s become quite normal.”

Last May, all of the gyms in the city that his teams used for practice — in recreation centers, district schools and local college campuses — had been shut down. Leagues in nearby suburbs simply switched to private facilities, but Worley’s organization rented the floor of a armory, converted it into two basketball courts and set up a basketball-themed learning pod, where children complete virtual schooling during the day and play pickup games during breaks.

The armory, located in Philadelphia’s city center, has an open floor for drills and a cargo bay door big enough to allow plenty of ventilation. This season, the space also doubles as a practice space for his six competitive teams.

“I really am a firm believer that sports unite people and bring people together in a way that other things just aren’t able to do,” Worley said. “There are so many things in the sport of basketball that translate to life. Learning how to win and lose and do it in stride. Being part of a team.”

Teams are taking other creative approaches to safety in order to stay active this spring. Kauffman prepares “P.P.E. kits” for all of her soccer coaches to use in practices and games. Kits include extra disposable masks, gloves, disinfectant spray and hand sanitizer.

At GMS Gymnastics in Manassas, Va., the gymnasts, who are separated into pods, carry their personal items around the gym in a milk crate. Using hand-held machines they call “foggers,” coaches sprays a disinfectant mist onto the balance beams, uneven bars and floor mats between pod rotations. Parents aren’t allowed inside at meets, so they watch their kids’ events on Zoom from the parking lot.

‘Let’s Help Them Have Joy’

Al Bazley, president of the West Tampa Little League, in Florida, which reopened this spring for the first time in nearly a year, said he’s seen more financial hardship among families this year than ever before, meaning sponsorships and donations are down. To save money, he personally pressed 250 jerseys rather than rely on third-party vendors.

“The job loss is really gut wrenching,” he said. “It’s hit a lot of people hard.” And while baseball can’t fix their problems, he said, it does provide a sense of normalcy.

It’s the inclusiveness that helps children, Bazley said. “It’s the cheering and the sounds when you go up to bat and you make a good play and all the parents go nuts and you feel this sense of accomplishment.”

Making the game fun is especially important right now, said Kauffman, who occasionally shows up to soccer practice in a tutu and suspenders, just to get the kids laughing.

“We’ve made birthdays a big freaking thing this year,” she said. The kids remain socially distanced while they celebrate, and everyone gets a squirt of hand sanitizer before getting a cupcake. “But also, we’re singing and dancing around the birthday kid. We’re making each kid feel like, ‘We see you.’”

Kauffman encourages parents to have perspective this season and to forget about the wins and losses.

“Let’s just help them have some joy and be active,” she said. “These kids just need fun in their lives right now.”

Jenny Marder is a senior science writer for NASA and a freelance journalist. She was formerly digital managing editor for the PBS NewsHour.