A granite-faced townhouse in Boston’s Back Bay neighborhood was designed more than 100 years ago by the artist Louis Comfort Tiffany and is seen today as the most comprehensive surviving example of his residential vision.

Its pale facade, with mosaic panels set in limestone and a stained-glass window over copper-clad double doors, is one of only two exteriors known to have been designed by Tiffany and the only one that remains intact.

The interior, featuring an oval staircase and an entrance with white marble wainscoting and mosaic stair risers, is equally striking.

For decades the building, known as the Ayer Mansion, has been owned by nonprofit organizations connected to the Roman Catholic group Opus Dei, and has functioned as part of a cultural center and a residence for women attending nearby colleges. During that time, its doors have periodically been opened to the public for tours, lectures and concerts.

But all of that could soon change.

The mansion was recently listed for sale — along with an adjoining building — with an asking price of $22.5 million. That has caused a measure of distress among some people who have worked for years to restore what they regard as a crucial monument to Tiffany’s genius.

Among them is Jeanne M. Pelletier, the preservation adviser for the nonprofit group Campaign for the Ayer Mansion, which has raised public and private money and worked with the mansion’s owner to repair and restore some of its features. Pelletier said she and others were concerned that a sale could halt or lower the standards of those efforts and make the mansion, which is a national historic landmark, inaccessible to scholars and other visitors. 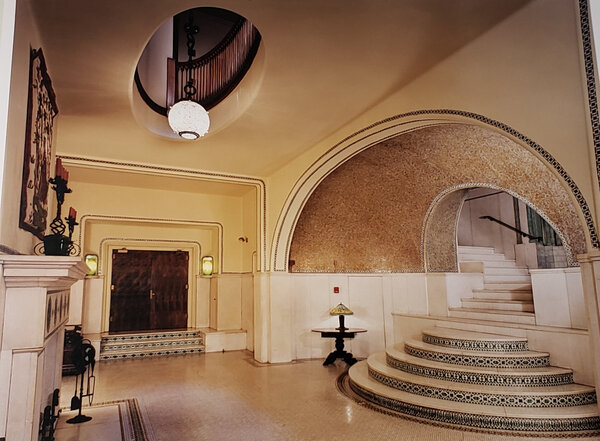 “Our biggest fear is that these nationally landmarked historic interiors will never be seen again by the public,” she said in an email, adding that it would be “a travesty” for the public to lose access to the building’s “museum-quality” features.

A spokeswoman for the Trimount Foundation, which owns the mansion and the adjoining building that together make up the residence and cultural center, said the listing was for both properties and was prompted by the fact that the student fees that provided money to operate them had dwindled because of the pandemic.

Trimount, along with a group that runs the residence and center, wants to see what potential buyers might emerge, said the spokeswoman, Marie Oates, but would be prepared to hold onto the property if it did not receive an offer it was pleased with.

Beyond that, Trimount would like to find a buyer who values the mansion’s history, Oates said, and hoped any new owner would make the premises accessible to the public, though that would be difficult to guarantee.

“We would like to give priority to a buyer or an offer where there’s going to be an interest in preserving what is a national treasure,” she said. “If we can find a buyer who is going to allow public access that would be awesome; we would be thrilled.”

Pelletier said Trimount’s director had told her that the mansion and the adjoining building could be sold separately.

Alice Cooney Frelinghuysen, an expert on Tiffany who is the Anthony W. and Lulu C. Wang curator of American decorative arts at the Metropolitan Museum of Art, said that the Ayer house was remarkable in large part because nearly all of its original elements have been preserved.

“The Ayer Mansion is an extraordinarily important surviving interior by Louis Tiffany,” she said. “It was all conceived as an entire work of art.”

The mansion was built between 1899 and 1902 for the businessman and art collector Frederick Ayer, according to the Campaign for the Ayer Mansion.

Since 1964, it has been owned at different periods by two separate nonprofit organizations associated with Opus Dei, an influential group historically connected to right-wing causes that was founded on the premise that ordinary life and daily work are paths to sanctity and service to society.

The building has been used during that entire time by a third nonprofit, the Bayridge Residence and Cultural Center, which also has a connection to Opus Dei and promotes “moral and ethical integrity.”

Bayridge began a restoration effort in 1997, first hiring an architecture firm to perform a study on the mansion and put together a preservation plan.

Since 1998, the restoration work has been organized by the Campaign for the Ayer Mansion and a similarly named predecessor group, which obtained grants from the City of Boston, the Massachusetts Historical Commission and the federal Save America’s Treasures program, as well as from private foundations and donors.

With the cooperation of Trimount and Bayridge, the Ayer Mansion campaign has undertaken close to $3 million of interior and exterior restoration work. The campaign has restored mosaic panels on the facade and repaired stained-glass screens from the mansion’s library.

It also restored a 20-foot-long Tiffany laylight above a set of marble stairs, using existing glass and replacing missing pieces with rare surviving glass obtained from the Neustadt Collection of Tiffany Glass.