Home » Entertainment » A Portraitist Whose Subjects Are All in Her Head A Portraitist Whose Subjects Are All in Her Head

The British artist Lynette Yiadom-Boakye is a committed painter of people. Every piece she shows is, on first impression, a portrait — a careful study of one person, or, at most, a small group, with little to distract from their presence and force.

Yet whenever she starts work, in her East London studio, she is alone. Her subjects are not living individuals, but characters sprung from her mind.

For several years, Ms. Yiadom-Boakye said in a recent video call, one recurring figure in particular appeared to her when she began a new set of paintings, as if demanding to be put on canvas.

It was a young man, seated, wearing a white top, with a kind of sardonic air. His identity was unimportant, she said: The point was his attitude, as if he were expressing back to the painter an energy essential to her creative process.

“It helped me to have that figure on the wall as a reminder,” she said. “There was a defiance, a very particular look that was almost like a guiding light.”

Fictions are freeing for Ms. Yiadom-Boakye, 43, whose first career-spanning survey, “Fly in League With the Night,” runs through May 9, 2021, at Tate Britain (though the museum is currently closed because of the pandemic). The exhibition features over 80 works going back to 2003, the year she graduated with an M.F.A. from the Royal Academy Schools in London. Since then, she has worked in a steadfast genre that she mapped and continues to deepen.

Though inspired by her memories and the sketches, photographs and magazine cuttings in her scrapbook, her characters are not composites, but rather creations in the moment. She does not draw them in advance, and their traits become clear as she works.

All of them are Black. It is tempting to read them as Black British, like the artist, whose parents arrived from Ghana in the 1960s, but that would be presuming. The costumes she gives them — a flared collar, a dress with a ruff — elude locations or precise time periods; the background is usually neutral, often dark. At most there is the hint of an interior, such as a sofa’s upholstery, or a suggested landscape.

There may be some clues: three young men, wearing leggings, conversing, as a fourth stretches, apparently in a dance studio; two gentlemen in suits, clinking flutes of champagne. But Ms. Yiadom-Boakye leaves her characters open to the viewer’s interpretation. (Her titles — like “Tie the Temptress to the Trojan” or “In Lieu of Keen Virtue” — are enigmatic, as well.)

The figures are moods manifested. Sometimes, they communicate conviviality, sometimes repose — but most often, the tone is of contemplation, in many fine nuances. 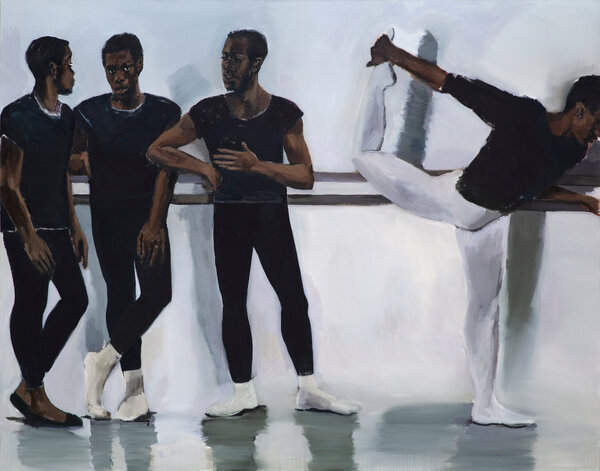 “They’re kind of just who they are,” she said. “They exist in the paint.”

When Ms. Yiadom-Boakye was forging her practice, in the early 2000s, figuration — indeed painting in general — was not particularly in style. Two decades later, it’s back: Market and museum interest in Black contemporary artists has expanded vastly, and Black portraiture, both from the present and in art history, is a major international research topic and curatorial focus.

Ms. Yiadom-Boakye’s own recognition has grown along the way. She was a finalist for the Turner Prize, in 2013. Her United States introduction came with “Flow,” a noted 2008 group exhibition at the Studio Museum in Harlem, and a solo show there in 2010. She had an exhibition at the New Museum in 2017, and she won the 2018 Carnegie Prize.

Yet she has kept a remove from trends, blending her own personal mix. Her seemingly traditional approach — her commitment to oil; her comfort with engaging the European lineage, from Goya to Degas to the British Post-Impressionist Walter Sickert — is itself a kind of trompe l’oeil, serving the liberating purpose of painting Black subjects according purely to her own imagination.

“She is highly regarded but not part of a clique or group at all,” said Andrea Schlieker, Tate Britain’s director of exhibitions and curator of the survey show. “She’s always done her own thing.”

Ms. Yiadom-Boakye grew up in South London, the daughter of two nurses. Her commitment to art formed early; she credits high-school art teachers who were passionate and rigorous. Still, she said, she would likely have chosen a different path had Britain’s introduction of fees for public universities, in 1998, come earlier: Hers was the last year of free tuition.

“I couldn’t have gone to art school if I’d had to pay,” she said. “It would have felt like too much of a crazy risk, and I’d have been financially too anxious to embark on that.”

At college, she spent one year at the storied Central St. Martins school, where the anti-painting climate proved annoying, she said. “I didn’t like being told that something was invalid before I’d even tried it,” she explained. “That goes for anything, not just painting.”

She left to enroll at the Falmouth School of Art, 300 miles away, in Cornwall, and was refreshed, she said, by its distance from London and a more open, practical academic atmosphere.

She returned to the capital after graduation, with growing confidence in setting her own path — and sensing, she said, that her background as a Black, middle-class daughter of immigrants would make her an outlier in London art circles, regardless of her aesthetic choices.

Though she established her method early, Ms. Yiadom-Boakye’s style has progressed through stages, whose full scope is apparent for the first time in the Tate exhibition and its catalog.

Early pieces, from 2003 to roughly 2008, demonstrate some of her signature touches: figures in three-quarter length in shades of a single color, some seeming to emerge ethereally from the night, or others whose energy concentrates in the glint in their eyes.

Missing, however, is the elegant calm that inhabits her later paintings. Those early works, she said, carried “something frantic and anxious.”

“Going from the sense of trying to illustrate an idea, to allowing the paint to bring something to life, or thinking about painting as a language in itself — that was the major shift,” she said.

That inflection came around 2009, she said, thanks, in part, to a residency in Marseille, France. There, her studio window overlooked train tracks and walls festooned with graffiti that shone in the Mediterranean light. She had so little money then, she recalled, that she couldn’t afford painting materials, and instead spent the period drawing in oil stick, methodically.

“Having to slow down like that was really liberating,” she said. “When I came back, the paintings were thinking about light and color much more effectively.”

Ms. Yiadom-Boakye’s star was rising at the time. In 2008, the influential curator Okwui Enwezor included her in the Gwangju Biennale; in New York City, Mr. Enwezor spoke highly of her to the gallerist Jack Shainman, who had fallen for her work at the Studio Museum.

“It wasn’t a question: I wanted to work with her,” said Mr. Shainman, who presented her first New York gallery show in 2010. Of Mr. Enwezor, who died last year, he said, “Okwui always talked so much about the humanity in her paintings.”

Like her characters, Ms. Yiadom-Boakye errs on the side of discretion. She works alone, keeping her studio space sacred. In the interview, she spoke of a taste for mystery novels, and she is a writer herself, of poetry and short stories with oblique, fable-like touches. And while her firm focus on Black figures could be seen as political at a time when racial representation in art is undergoing a major reassessment, Ms. Yiadom-Boakye tends to refrain from announcements about identity and belonging.

In 2019, however, Ms. Yiadom-Boakye participated in the inaugural Ghana Pavilion at the Venice Biennale — a blockbuster production including works by the artist Ibrahim Mahama, the Ghanaian-British filmmaker John Akomfrah and more, in a structure designed by the architect David Adjaye.

“It was a very beautiful thing to do,” she said. Her roots, she said, transmitted by her parents’ ethos, “have always been in the work, even though there aren’t Ghanaian flags or monuments in the back.” Last Christmas, she was thrilled to make her first trip back in years, noting wryly that she might have stayed to wait out the pandemic there, had she anticipated it.

She demurred from placing herself in a specifically British artistic lineage, but Ms. Schlieker, the curator, said the Tate Britain survey makes a statement. “It’s particularly important to see Lynette’s work in the context of a collection,” Ms. Schlieker said. “And our collection stretches across 500 years of British art” — with few Black figures, or artists, in the canon.

In Ms. Yiadom-Boakye’s ensemble of characters, however, there reigns a serenity, too self-composed to be ruffled by representation battles.

Being of her own creation, they are like a host of arm’s-length alter egos, each unique, but some linked by expression, by a color or composition detail.

As for the man in white with the sardonic air, he hasn’t appeared lately, though Ms. Yiadom-Boakye said she had no doubt he would show up eventually in some form.

“I think he’s been replaced, but I’m not sure with whom,” she said. “I think I’ve made new friends.”

Fly in League With the Night
Through May 9, 2021, at Tate Britain, in London; tate.org.uk. 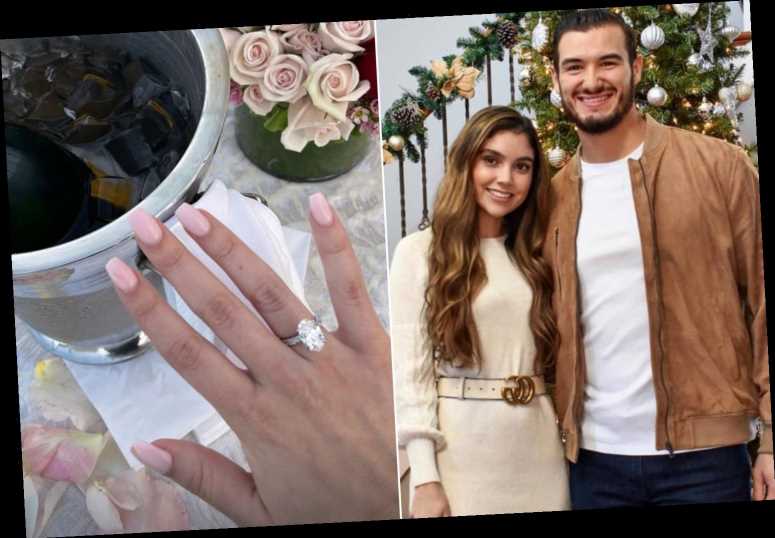