Home » Entertainment » A Handel Master on Building the Perfect ‘Messiah’

Julian Wachner, the director of music and the arts at Trinity Wall Street in New York, organizes hundreds of performances each year for the church. But he has become best known for his annual “Messiah,” perhaps the best of the city’s many versions of Handel’s classic oratorio. It cannot take place this year in person, of course, but on Dec. 13 Trinity will stream a 2019 performance on Facebook.

There are so many Handel “Messiahs,” since it’s the rare piece that has stayed in the repertory since it was written, almost 300 years ago. It’s changed with the times. There’s Handel’s version, of course. Less than 50 years later, Mozart made a version and added winds. In the 19th century, Ebenezer Prout did an arrangement with trombones, and in the 1950s, Eugene Goossens added cymbals, glockenspiel, harp. Andrew Davis has done one more recently.

So today “Messiah” is being presented in so many different ways. The purely historically informed way — which tries to get back as much as possible to Handel’s time — is happening, of course, but it’s not what everyone necessarily loves. I get as much negative feedback for doing it as positive. Some of the most negative feedback was always from my dad; he passed away this year, but he and I just totally disagreed on the concept of early music. He wanted Handel to sound like all the other, primarily 19th-century music that he knew.

When the historical performance movement began in earnest, I was part of the first generation that didn’t have to unlearn the piece to relearn the piece. I’m 51, and my time as a boy chorister coincided with New York City’s first historically informed “Messiah.” That was in 1979, with Gerre Hancock leading the Concert Royal and the Saint Thomas Choir of Men and Boys. It was lean and clean, and probably not that much different than how I do things now. 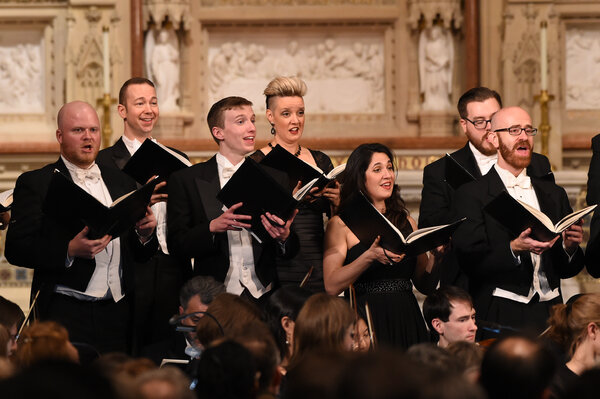 One of the things that the historically informed performance movement did has nothing to do with historical performance — I mean with using the “right” instruments, the “right” tuning, the “right” tempos, all of that. In terms of any kind of interpretation, one of the major things about “Messiah” is, it is 52 movements long. If you think of it as a multi-movement work, in which you take time between each movement, that is a very specific choice that is based out of the concert hall; it becomes a concert piece, where each movement is a discrete thing. If you were to just look at the piece, there’s no reason you wouldn’t approach it that way.

But obviously that’s not what I do. And it’s because the historical performance movement reintroduced modern performers to opera from the 17th and 18th centuries, and we started to rediscover Handel as an opera composer. Once you perform a Handel opera, you can never perform “Messiah” the same way again. So the dynamic has to do with people from the lyric stage versus the concert stage. Once you look at “Messiah” as a dramatic piece — even though from the libretto, it’s one of the least dramatically inclined works there is — the music is so clearly organized to drive forward.

Four visions of the opening

Everybody loves to trash Thomas Beecham’s recording of the Goossens version, but it has vitality and energy; I don’t find it turgid or slow. You can do a dramatic performance of Handel’s “Messiah” with the Goossens orchestration; what you have to figure out is a sense of pacing, and what pulse works.

The Robert Shaw version is very interesting as well. That opening Sinfonia is so square and academic; it doesn’t say anything to me. And then I went back to John Eliot Gardiner, his recording from 1982. When I was first listening to it, it was 1989, because I started conducting “Messiah” in 1990. I went back to listen to it today thinking that I had ripped off all his tempos, and he’s so slow! Paul McCreesh does do my tempos.

In those first two measures, you know where you’re going to go for the next two and a half hours. Are the gestures dotted or double dotted? Is there a dynamic scheme? Does the theology impose upon the choice of tempo or gesture? It’s about this battle between light and the absence of light. And the piece is called “Messiah,” not “The Messiah”; it’s “messiah” as a concept. Do you start it softly, as if it’s coming from a distance, and as it repeats it gets louder, which would imply something teleological? Do you do something “generic” — like the first time it’s mezzo-forte, then maybe you come down softer at the repeat and crescendo to the end? Do you use harpsichord or organ?

This is expert music, and you want done expertly, particularly in Part 1 when the boy choir isn’t doubled. If you have a skilled boy choir, it can be wonderful, but eight or nine sopranos would be my ideal. For the alto section, I use a technique a lot around voicing Renaissance motets, of combining countertenors and altos in a single part; I call it the “Farinelli” effect, after that movie. (They basically combined the countertenor Derek Lee Ragin and a soprano to create the effect of a castrato.) And the tenors and basses are the tenors and basses.

Something like the “Hallelujah” chorus sounds amazing with a huge chorus and full orchestra. The 1959 Beecham recording is extraordinary. It’s off the charts. But also John Eliot Gardiner and Paul McCreesh — these are three totally viable, wonderful versions, and very different. But it’s interesting: I can’t remember one where somebody took sort of a slowish tempo.

There are endless choices. How to present the whole piece, for one thing. Do you do it with two intermissions, after the first and second parts? No one does that because after the “Hallelujah” chorus at the end of Part 2, everyone is going to leave. So maybe a quick pause before the third part. But a colleague of mine broke it up after “All we like sheep,” which ends “It was laid on him, the iniquities of us all.” It’s very dark, and like saying to the audience, “Go screw yourself.” That’s an interpretive choice.

With the aria “If God be for us,” I’ve heard it be a solo boy soprano, solo violin, cello, organ. And with the purity of that, you’re really asking the question: “If God be for us, who can be against us?” There’s a very specific objectivity and purity.

You could also have it be full strings and a lyric soprano, and then it becomes a love song. It’s like the high point of a love scene in an opera. With the choice of how you realize this, those two different worlds can be activated, and that will inform how you will hear “Worthy is the lamb,” which comes next to close the piece. If the first aria has that simple purity, “Worthy is the lamb” makes it a kind of apocalyptic purity. The power and the majesty then come through. If you have the love-song version, then “Worthy is the lamb” is just furthering the whole concept of love. The small version of “If God be for us” followed by big version of “Worthy is the lamb” feels more Protestant to me; the other feels more Catholic, what you would hear in Mexico City or Montreal.

At Trinity, we don’t have the standard quartet of soloists for the arias, but different people come forward from the chorus for each of them. I first did that in 1990. I was 20 years old, and the university organist and choir master at Boston University. It was the height of the AIDS crisis, and we did it as a benefit. And because it was about something else, I didn’t want to hire special singers. It just felt like the right way to do it to keep it in house. And that probably caught on. I wonder if that is how Trinity started doing it. Because when I interviewed at Trinity, one of the interview questions was, “Are you going to change our tradition of soloists coming out of the choir?” And I was like, I started that!

The Trinity Choir happens to be a choir of soloists. But it’s also very hard to find one singer who can do all those arias. I think if you have a different soloist for each, those arias then can tell their own story, and tell their own trajectory. There’s a whole lot to gain.

The biggest hurdle this piece faces is its familiarity. I always tell people to play it and sing it to the person who has never heard it or seen it. It has to be electrically charged for that new person. Even if a piece is the best piece on the planet, you need to do something with it.

Off-White™ Explores the Intersection Between Sneakers and Boots