Home » Entertainment » A Composer’s Notes Echo After His Death

When the Finnish composer Einojuhani Rautavaara died in 2016, at 87, a voice of rare lyricism in contemporary music fell silent. His death severed a link to the past: Rautavaara had been a protégé of Sibelius, Finland’s master composer, and one of the pallbearers at his funeral in 1957. Rautavaara’s music, too, conjured the past. Though he entertained some modernist techniques, at core his style was seductively, if idiosyncratically, Romantic.

This week, he has delivered an unexpected posthumous greeting. A new album, “Paris,” by the star violinist Hilary Hahn and the Orchestre Philharmonique de Radio France, features two gleaming serenades — one addressed to love, the other to life — that were the last pieces he wrote. Hahn said in an interview that when she heard of their existence, it felt like receiving “a letter from the beyond.”

“We thought there wasn’t anything else,” she added. “And he left us this gift.”

The gift was intended for Hahn. In 2014 she had performed Rautavaara’s soaring Violin Concerto, written in the 1970s, with the Radio France orchestra. She was so taken by the piece that she told the ensemble’s Finnish music director, Mikko Franck, that she wanted to commission another concerto from him.

Franck agreed to broach the subject, though he knew Rautavaara’s health had been fragile since he suffered a ruptured aorta in 2004. When they spoke, Rautavaara said he did not want to write another concerto, but that he was drawn to the idea of a suite of serenades. The conversation ended inconclusively, and Franck and Hahn came to believe the project had fallen victim to Rautavaara’s weakened condition. Another work for violin and orchestra, “Fantasia,” written for Anne Akiko Meyers and completed in 2015, appeared to be his final composition. 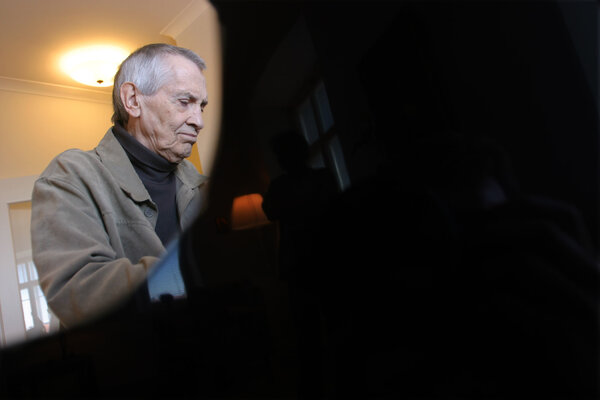 After Rautavaara’s funeral, his widow, Sinikka, took Franck aside and showed him the manuscript of two serenades for violin and orchestra. “Serenade to My Love” was complete; for “Serenade to Life,” the solo violin part had been finished, but the sketches for the orchestra cut off near the end, as if in midsentence. Franck noted that the titles for the pieces were in both Finnish and French; they were clearly intended for Hahn and Franck’s Paris-based orchestra.

The composer Kalevi Aho, a student of Rautavaara’s, completed the orchestration, and in February 2019 Hahn and Franck performed the serenades in Paris. “The audience was so quiet throughout the whole premiere,” Hahn said. “We all felt that these notes will never be new again.”

In fact, there are few truly new notes in these un-self-consciously rhapsodic pieces. Rather, they sublimate themes from earlier Rautavaara vocal works, weaving a web of memory and longing. One source he drew on was a set of serenades for male a cappella choir from the 1970s — one of them addressed to beer. The melody of “Serenade to My Wife,” on a text by Stefan George about the fading glow of late summer, is the blueprint for the searching, self-absorbed solo line in “Serenade to My Love.”

“It’s lush despite itself,” Hahn said of the music. On the new album, which also features works by Chausson and Prokofiev, she plays it with luminous tone and sustained intensity, her part soaring above a string orchestra that swells and falters.

“Serenade to Life” quotes from Rautavaara’s 1991 opera “The House of the Sun,” a tragicomedy about two Russian aristocrats who die in exile, clinging to dreams of past grandeur. This serenade begins with a slinky and fluid line for the solo violin, complemented by playful woodwinds that give the music an expansive and sociable feel. In the final moments, a frantic, percussive energy takes over and drives the piece to an abrupt ending.

Sinikka Rautavaara said in an email that in this final serenade, “the feeling remains that life was too short after all.”

Hahn said that in performing a composer’s last works she felt the weight of responsibility, “knowing that we were finishing the things that he had started to say.” The premiere, she added, “was the end of something, but it also felt like a beginning.”

“Now the piece is out in the world; it’s almost like a birth,” she said. “The entire catalog is there, and it can become this living legacy.”

That first performance is the one captured on the new album. “Everyone onstage felt the significance,” Hahn said. “You are completing a composer’s catalog. There will be no more new notes after this.”