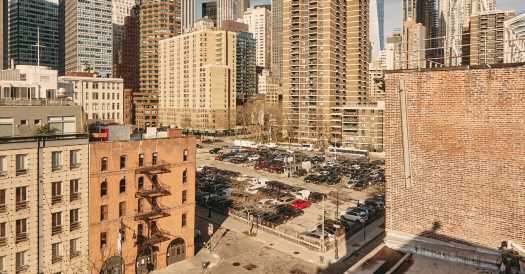 A Billion Dollar Battle Over a Parking Lot at the Seaport

The other morning I boarded a No. 2 train to check out a parking lot at the South Street Seaport Historic District.

You might ask how a landmarked oasis of quaint Americana came to include a huge surface parking lot that leaves a bizarre no-man’s land between the low-rise 19th-century storehouses lining Water to the east and the modern skyscrapers of Lower Manhattan, west of Pearl.

Partly the answer is that Pearl, a widened street, used to have an elevated train, effectively cordoning off the narrower, cobblestoned waterfront lanes, so it implies an edge or border. But a fuller explanation involves deals cut back in the day by local politicians appeasing NIMBY constituents who didn’t want their waterfront views blocked by a tower at 250 Water.

It’s a New York story, in other words.

As part of the district, the lot has caused endless headaches for the city’s Landmarks Preservation Commission since the area was designated in the 1970s. Various proposals have surfaced to develop the property. The commission OK’d one 30 years ago: an ill-conceived, never-realized plan for an 11-story monolith — too big for the four-, five- and six-story Georgian and Federal-style historic architecture, puny next to high-rise neighbors. A decade later, local residents backed a zoning that allowed a similar-size development, inhibiting anything taller absent city permission.

Now a new proposal is making its way through the city bureaucracy. 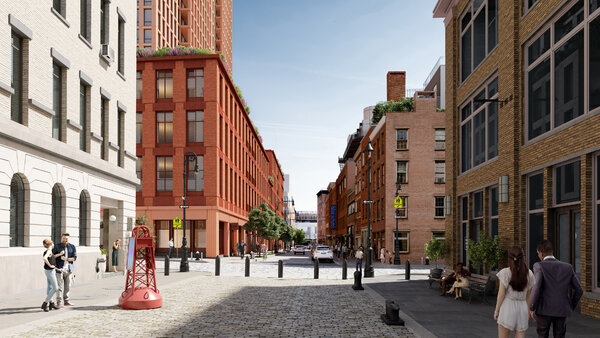 At a Landmarks Commission hearing in January the Howard Hughes Corporation, which bought the 48,000-square-foot lot for a whopping $180 million in 2018, unveiled a scheme to clean up mercury under the property (this used to be the site of a thermometer factory) and build a $1.4 billion, 470-foot-high mixed-use development. Chris Cooper and a team of architects at Skidmore, Owings & Merrill produced a design.

They imagined a pair of 38-story residential towers rising from a six-story podium containing office, retail and community spaces. The podium-and-towers arrangement was an attempt to negotiate the tricky but crucial transition between the Seaport and the taller modern buildings immediately around it. The plan envisioned 260 market-rate condos occupying the towers along with up to 100 subsidized units for tenants averaging 40 percent of the area’s median income, a significant number in an affluent district.

During Mayor Bill de Blasio’s tenure precious few affordable apartments have been built below Chambers Street in Manhattan. Meanwhile, 1,651 subsidized apartments were lost in 2014 when tenants at Southbridge Towers — the middle-class, 1960s-era Mitchell-Lama high-rise development across Pearl Street from the parking lot (which is to say, just outside the historic precinct) — voted to cash in on decades of public subsidy and privatize.

It was their views of the waterfront that officials spared by including 250 Water within the precinct.

In addition to subsidized apartments, Hughes said it would contribute $50 million to the South Street Seaport Museum, should the project win approval. The museum, which among other things maintains a costly fleet of old ships, was established during the 1960s with an unfunded mandate to sustain the legacy of the waterfront. The conceit was that it could derive revenues from real estate developments in the district. Block 98, as 250 Water Street is also known, was early on earmarked as a potential development site.

But the museum never reaped the expected benefits. It became a crash test dummy for a failed neoliberal exercise in cultural patronage. Serially betrayed by the city, ill-served by various leaders, it is now under capable management but diminished to a skeletal staff and on life support.

Opponents of Hughes’s proposed development rightly point out that Landmarks commissioners aren’t supposed to consider issues like affordable housing or the museum. Land use isn’t their domain. This is true.

Born from the rubble of the demolished Pennsylvania Station, the commission assesses architectural “appropriateness,” a purposely vague term of art devised to insulate considerations of aesthetics and historical significance from the ephemera and vicissitudes of politics and real estate. The city’s Uniform Land Use Review Procedure (ULURP) only happens if Landmarks first approves a development on aesthetic grounds.

Is this a sensible system? That’s a perennial question likely to arise again in the coming months when the outgoing mayor pushes a contested rezoning plan for SoHo. If 250 Water is the Thirty Years’ War, SoHo looks to be Ragnarok.

Whatever, nothing prevents public speakers during Landmarks hearings from advocating for causes like the museum or affordable housing — or commissioners from hearing those arguments. Dozens of citizens called in to do just that in January and again at a second hearing about 250 Water this month. Similar numbers of detractors denounced these discussions, accusing the developer, in effect, of pitting underserved families and the museum against the district’s heritage.

It was a pithy but false dichotomy. If low-scale buildings were all that defined the Seaport’s neighborhood and heritage, it could be Woodside, Queens. In response to commissioners’ concerns, Hughes, Cooper and his colleagues returned for the second hearing with a scaled-back plan: a 27-story, 345-foot-high building containing 70 subsidized apartments. The two towers were gone, replaced by a single articulated mass, at Pearl Street. Commissioners still had qualms, so a third public meeting is now set for May 4.

I understand the fears and fury of neighbors and preservationists but I hope Landmarks approves Hughes’s application then, and the proposal goes through land-use review.

In 1960, David Rockefeller and a group of downtown business leaders envisioned demolishing the whole Seaport and replacing it with a five-million-square-foot World Trade Center. By then the gritty neighborhood that the writer Joseph Mitchell famously celebrated during the 1950s, with its salty characters, feral cats and open-fronted market sheds heaped with fresh fish, was in steep decline. Jane Jacobs was talking about the civic virtues of “plain, ordinary, low-value old buildings,” but she was still an outlier. An editorial in The Times endorsed the Rockefeller plan as promising “a great future” for downtown.

That the Seaport was nonetheless spared, and the twin towers built on the opposite side of the island (erasing another old commercial district), was a triumph for preservation.

But the neighborhood has not been a triumph. The critic Ada Louise Huxtable, who fought to save the Seaport’s architecture, worried as early as the 1960s about the embalming of the district. The challenge, she wrote then, was “to make the city’s heritage a working part of the dynamic vitality and brutal beauty of this strange and wonderful town.”

This is still the challenge. Heritage involves much more than bricks and mortar. During the 1980s the Seaport was scrubbed and tarted up by Hughes’s corporate ancestor, James Rouse, as a “festival marketplace” — a sanitized shopping mall in the guise of Ye Olde New York, with a target audience of fearful tourists, courted on television spots whose tagline was: “Where New Yorkers go to get away from New York.”

New Yorkers really didn’t go at all. When the World Trade Center was bombed, tourism in Lower Manhattan evaporated. Then 9/11 happened. Then Hurricane Sandy, now the pandemic.

A mostly wealthy cohort today occupies Seaport rowhouses and warehouses converted into costly apartments. Hughes built Pier 17, catering to after-work Wall Streeters seeking high-end bars, restaurants and entertainment. For good reason the Landmarks Conservancy; Manhattan’s borough president, Gale Brewer; the local City Council representative, Margaret Chin; various housing advocates; local shop owners; former Landmarks commissioners; downtown cultural groups and a Black resident of Southbridge (who said “there are a minority of us,” adding “if I am being clear”) all spoke up for Hughes’s development, with its subsidized housing and money for the museum, at the last hearing.

Adding her implicit support, Sarah Carroll, the chair of the Landmarks Commission, noted that, in the past, the commission had supported the addition of many “contemporary” projects in historic districts and seen fit to approve more than a dozen new buildings within the Seaport, along with various rooftop accretions and pier structures. Elsewhere, she said, the commission has endorsed a supertall residential tower on a portion of the landmarked Dime Savings Bank site in Williamsburg, Brooklyn, which has thrown off funds to restore the century-old, Neoclassical building.

In Times Square, I would add, new skyscrapers have underwritten the restoration and maintenance of old, landmarked theaters.

The updated plan by Cooper and his colleagues that will be presented to the commission at the hearing on May 4 reduces the height of the tower by another 23 feet. It eliminates a setback from the podium and compresses the podium itself, aligning its cornice a little more with the buildings on Water Street. With the addition of sills, the podium’s office windows more closely approximate the proportions of the windows on the 19th century facades, as some commissioners desired. Other bits of architectural microsurgery quiet the tower on the skyline, slightly.

It’s a solid building now, not Architecture with a Capital A. In the end, the parking lot is an anomalous hole on a questionable edge. There’s nothing else like it in another historic district, so its transformation would set no obvious general precedent. But it would realize a promise of the original plan for the Seaport when it was conceived more than five decades ago.

City officials will need to pin Hughes down if the proposal reaches the land-use review stage. They will need to hear how the building will be designed to cope with climate change. They should demand more robust commitments to permanent affordability and upfront payments to the South Street Seaport Museum. Fifty million dollars seems the minimum to help secure the museum’s financial footing. And the truth is that Hughes ought to donate the money anyhow, since it already profits from the welfare of the district.

This may not be anyone’s ideal way to address the city’s affordable housing crisis or finance a cultural touchstone or build a skyscraper or a neighborhood.

But one thing is certain.

It’s better than a parking lot.

How Humanity Gave Itself an Extra Life
Entertainment