Home » Entertainment » 7 Things to Do This Weekend

Our critics and writers have selected noteworthy cultural events to experience virtually.

Specials to Stream Before the Emmys 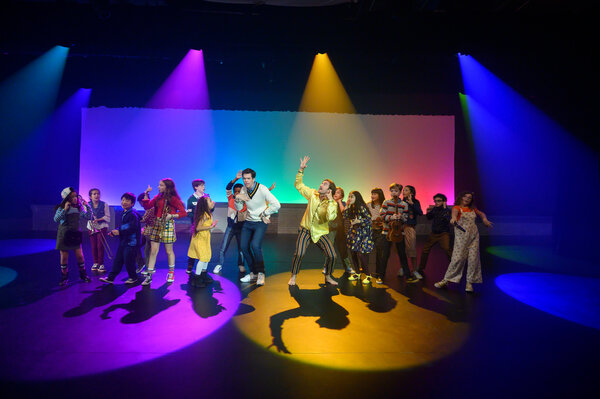 The best chance for a stand-up comedian to win an Emmy Award on Sunday will come in the Outstanding Variety Special (Pre-Recorded) category, an outcome of the Television Academy’s restructuring of the variety competition for the 2018 ceremony to better distinguish taped comedy and musical specials from live programming like awards shows.

You can binge them all this weekend to see which you prefer. My vote would go to Mulaney’s program, which is the one true variety special in the group. A children’s show, it features heartfelt confessionals from its young stars, comedy sketches that subvert our expectations and showstopping musical numbers that include guest performances by André De Shields, David Byrne and Jake Gyllenhaal.

Comedy Central has ordered two more “Sack Lunch Bunch” specials from Mulaney. They will reunite the cast of children for more inspirational fun and silliness, which we all could benefit from right about now.
SEAN L. McCARTHY

The Joys of a Modern ‘Much Ado’

Almost always with Shakespeare, there is a period of adjustment as the play begins. It takes a few minutes before the dust shakes off and we can hear past the time-capsule quality of the language.

Joss Whedon’s “Much Ado About Nothing” has none of that. In this marvelously fluid, under-the-radar darling of a film by the creator of “Buffy the Vampire Slayer” and the director of “The Avengers,” Shakespeare’s language slips from the actors’ lips with the lived-in naturalness of contemporary speech. Whatever the trick to that is, Whedon and his remarkable cast mastered it in this black-and-white release from 2013, now streaming on HBO Max.

Their extraordinary comfort level surely has something to do with the fact that he gathered the performers from his past projects and filmed them at his home. Amy Acker, as Beatrice, and Alexis Denisof, as Benedick, have the fizzy screwball chemistry of exes resisting attraction, while Fran Kranz is a puppyish Claudio who turns mad dog when, Othello-like, he mistakes slander about his beloved Hero (Jillian Morgese) for truth.

The cast is very white, which says something unintended and unpleasant about Hollywood connections. That aside, though, this is a joyous piece of work.
LAURA COLLINS-HUGHES

Requiem for a Music Mecca

When Other Music opened on East Fourth Street in 1995, its location across the street from the megastore Tower Records signaled resistance to major labels and the musical mainstream. The beloved indie shop ended up outliving its corporate neighbor by a decade — due in no small part to the expertise of its staff and the community they cultivated. Even so, with record sales down and rent prices up, the store’s proprietors saw the writing on the wall and announced that they were closing the shop in 2016.

Where Other Music once stood, there’s now a fast-casual eatery with millennial pink branding; the space Tower Records occupied is home to a pair of fitness franchises. If this sort of thing makes you pine for the heyday of physical media or the East Village’s artsier past, a new documentary offers an outlet for nostalgia: “Other Music,” directed by Puloma Basu and Rob Hatch-Miller, tells the story of the store from the perspectives of staff, customers and the musicians whose careers it helped nurture — including Vampire Weekend’s Ezra Koenig, TV on the Radio’s Tunde Adebimpe and members of Animal Collective. The film is available to stream free with an Amazon Prime membership, and costs less than $5 to rent on iTunes, YouTube and Google Play.
OLIVIA HORN

Mozart in the Flower of His Youth

If you feel like you’ve seen the director Tobias Kratzer’s name all over the opera world’s digital stages during this pandemic, you’re not wrong. His take on Wagner’s “Tannhäuser” was recently streamed by the Bayreuth Festival; his approaches to Zemlinsky’s “Der Zwerg” (at Deutsche Oper Berlin) and Offenbach’s “Les Contes d’Hoffmann” (at Dutch National Opera) were released on DVD in the spring.

This is the final weekend to catch another online artifact of Kratzer’s visions: his version of “Lucio Silla,” written by Mozart when he was still a teenager, in 1772. Kratzer’s bleak, video-art-heavy production was presented by the Théâtre Royal de la Monnaie in Brussels — and streams free (with subtitles) on OperaVision’s website and YouTube channel through Wednesday.

There’s no mistaking “Silla” for one of Mozart’s mature masterpieces. Yet it points in the direction of future glories — and not just because it dramatizes a ruler’s moral evolution (as in “La clemenza di Tito”).

In his modern-dress staging, Kratzer is unwilling to forgive Silla. And after a long stretch of watching Silla abuse (and surveil) Giunia, performed here by the soprano Lenneke Ruiten — who is both thrilling and affecting when singing the second act showpiece “Ah se il crudel periglio” — many audiences may be ready for the rough justice delivered in Kratzer’s denouement.
SETH COLTER WALLS

A Scion of Black American Music

Search Keyon Harrold’s name on any streaming service and a lot of tracks by other people will pop up. Harrold is one of the most imposingly gifted trumpeters in jazz today. (Proof? He flawlessly overdubbed Miles Davis’s trumpet tracks for the 2015 biopic “Miles Ahead.”) But really he’s a scion of the Black American musical tradition writ large. Featured on tracks by Nas, PJ Morton or Terrace Martin, and backing up Common, Maxwell or Rihanna in concert, he fits in naturally and elevates the vibe.

On “The Mugician,” Harrold’s politically forthright 2017 LP, all that accompanying work became fodder for anthemic compositions, with his assured trumpet playing lighting the path between passages of pent-up slow motion and unshakable grooves. A jazz ensemble was the album’s backbone, but he elegantly folded in string sections, star guest vocalists and the occasional digital backbeat.

On Saturday at 8 p.m. Eastern time, he’ll perform onstage (without an audience) at the Blue Note in New York, revisiting tunes from “The Mugician” and debuting compositions written during quarantine. He’ll be joined by his regular band: Shedrick Mitchell on piano, Nir Felder on guitar, Burniss Earl Travis on bass and Charles Haynes on drums. Tickets to the livestream are $15.
GIOVANNI RUSSONELLO

Celebrating From Coast to Coast

Summer is over and the stages of New York are still off limits, but the City Parks Foundation’s digital series SummerStage Anywhere continues. On Saturday, it celebrates National Dance Day on its Instagram page from noon to 9 p.m. Eastern time.

Taking advantage of the virtual format, the programming jumps around the country — a different company taking over at the top of each hour. At 2 p.m., for example, Jacob Jonas’s troupe shares a film of “Parked,” the drive-in performance it staged in Los Angeles in May. Two hours later, Spectrum Dance Theater, from Seattle, offers “Shot,” a forceful protest against police violence. And at 6 p.m., the ever-inventive Rennie Harris Puremovement, the pride of Philadelphia, shows how to be rooted in hip-hop’s past without being stuck.

In the final hour, the focus returns to New York (and the streaming expands to SummerStage’s YouTube channel as well as its Facebook and Twitch pages). Since May, the series “Tethered” has been pairing excellent musicians and dancers to make moody, layered videos (available at fourfourpresents.com). One made for the occasion, “Tethered VIII, a Love Letter to New York,” serves as a finale. The musicians: Akie Bermiss and Rachael Price of Lake Street Dive. The dancers: Matthew Rushing of Alvin Ailey, Daphne Lee from Dance Theater of Harlem, the flex master Havoc, the choreographer Sonya Tayeh and more.
BRIAN SEIBERT

For years, activists have been striving to make Black voices more heeded, from corporate boardrooms to the halls of government. Now, at least two organizations are also working to ensure that these voices are listened to more in young people’s homes.

This weekend, those groups — Family Music Forward and the online station WEE Nation Radio — will present Kukuza Fest, a free celebration of Black artistry for children. (“Kukuza” is Swahili for “amplify.”)

The concert, which streams on Saturday and Sunday from 3 to 5 p.m. Eastern time on WEE Nation’s Facebook page and You Tube channel (it will remain on both afterward), will feature about a dozen performers each day. They range from Marilyn McCoo and Billy Davis Jr., the married couple who first gained fame in the 1960s as members of the 5th Dimension, to the young musician Irie Goose, who will appear with his father, the dancehall master known as Father Goose.

Pierce Freelon, whose album “D.a.D” is about Black fatherhood, and Markette Sheppard, a journalist and children’s book author, will serve as M.C.s. The other stars include Renée Collins Georges, a jazz vocalist and educator; Reggie Harris, whose songs illuminate Black history; the hip-hop group Alphabet Rockers; and the country singer Rissi Palmer. Their message is simple: Everyone deserves to be heard.
LAUREL GRAEBER

This is what virtual learning looks like for teachers