Home » Entertainment » 5 Things to Do This Weekend 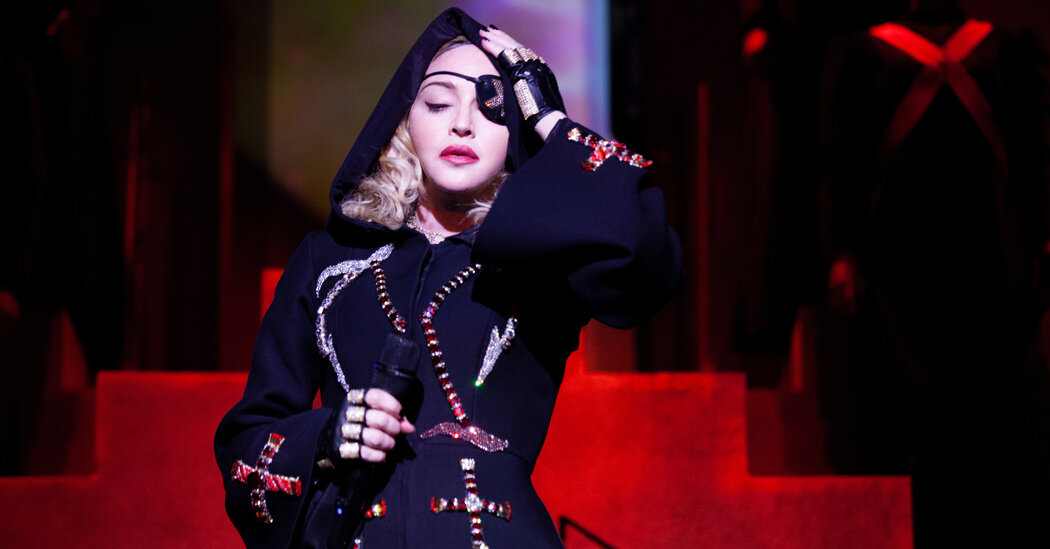 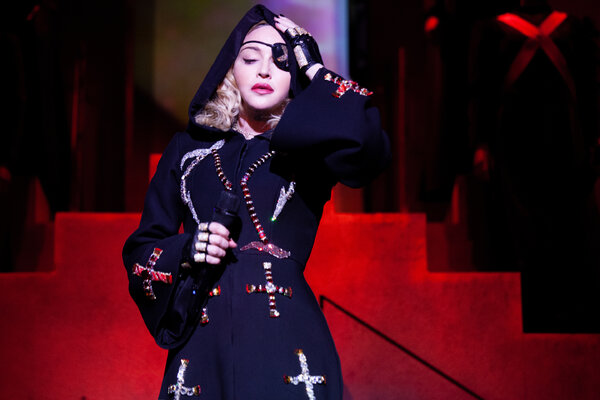 “I hope I have disturbed your peace,” a chatty, lightly polemical Madonna proclaims in between songs in “Madame X,” a new concert documentary that shares its name with her 14th album, from 2019. Coming to Paramount+ on Friday, the film captures the live show that the pop titan created for her “Madame X” tour.

Both on the album and in this staged rendition, Madonna challenges her audience to keep up with her itinerant musical interests. She sings in the Portuguese fado tradition; she recruits a Cape Verdean choir to back her on a batuque-inspired number; she duets with the recorded voice of the Colombian singer ​​Maluma. Onstage, she renders these songs with typical flair, from pageant-y costume changes to elaborate choreography to stunts like auctioning off Polaroids to audience members.

Of course, she also saves room for her early-career hits. And because the “Madame X” tour barred phone use and photography, this new footage arrives unspoiled by fan recordings.
OLIVIA HORN

The music for Paul Hindemith’s opera “Mathis der Maler” (“Matthias the Painter”) isn’t exactly obscure. It’s quite popular among conductors who specialize in the 20th century, like Esa-Pekka Salonen. But there’s a catch: Hindemith’s inventive orchestral writing is generally heard in his own symphonic adaptation. Recordings of the full opera have been elusive, particularly on video.

A recent DVD and Blu-ray release of Theater an der Wien’s 2012 production fixes that. It’s also available as an audio-only recording on streaming services. But this image-driven work — in which the main character questions the meaning of his art during the German Peasants’ Revolt — cries out for a staging.

The director Keith Warner keeps things conceptually straightforward, yet focuses on the libretto’s complexities. The cast (including Wolfgang Koch in the title role) works on that same level. Hard-core fans will want to see it (even if they won’t want to impeach a vintage audio recording with the legend Dietrich Fischer-Dieskau). But this video version is also easily recommendable as a first experience of the opera.
SETH COLTER WALLS

By January 2020, the California-based dancer-choreographers Keone and Mari Madrid had already earned legions of fans through their work on a Justin Bieber video and their appearances on Jennifer Lopez’s TV competition “World of Dance.” Then they arrived in New York with “Beyond Babel,” an Off Broadway dance production inspired by “Romeo & Juliet” and set to a contemporary pop and hip-hop playlist. It was an ambitious experiment in stretching their singular style of physical and emotional storytelling from a few minutes to an evening-length show.

The pandemic cut short the initial run, but now “Beyond Babel” is back at the Gym at Judson, near Washington Square Park, through Nov. 21 (performance times vary). With a cast of 12, including the Madrids, this 90-minute dystopian tale of thwarted lovers divided by a wall is told through a thrilling display of urban dance that pairs virtuosic popping and locking with humor and tenderness. Tickets start at $45 and are available at beyondbabelshow.com.
BRIAN SCHAEFER

When pen pal clubs came back in style during the pandemic, the playwrights Sam Chanse and Amina Henry were inspired to write “P.S.,” a narrative they have crafted through letters between the characters Ona and Bea.

Those who paid to partake in this theatrical experience have received Ona and Bea’s correspondence in their mailboxes over the past year. Now, the drama culminates with an in-person show through Oct. 23 at Ars Nova (performance times vary; tickets are $15).

If you’re new to the world of Ona and Bea, fear not: Before you see Alexis Floyd, Lee Hubilla and Ruibo Qian give new life to Chanse and Henry’s poetic dialogues onstage, you can go to the “P.S.” Letter Library on Ars Nova’s website, which contains audio and PDF versions of all 15 letters.

From Oct. 25 to Nov. 20, “P.S.” will be available to watch on Ars Nova Supra, the company’s new streaming platform. To watch a single performance on demand, it’s $10; a monthly subscription, which includes Ars Nova’s extensive library of digital shows, is $15.
JOSE SOLÍS

Many flights zoom across the New York skies every day, but few are as eye-catching as those scheduled to take off from the Bronx on Monday.

That’s when Wave Hill, the public garden in the Riverdale section, will offer raptor demonstrations to cap a nature-filled holiday weekend. The fun starts at 10 a.m. on Saturday with a drop-in — until 1 p.m. — family art project that consists of making tiny terrariums. (The activity, which is free with garden admission, will be repeated on Sunday at the same time.)

Children 10 and older can also join the naturalists Paul Keim and Gabriel Willow for a bring-your-own-binoculars fall birding walk on Sunday from 9:30 to 11 a.m. Families who register — the fee is $15 — can expect to see migratory songbirds and perhaps falcons and hawks.

Those large raptors, as well as owls, will star on Monday in Wings Over Wave Hill: Birds of Prey Day. At 12:30 and 2:30 p.m., the falconer Brian Bradley will show off their skills in Skyhunters in Flight. These presentations, which require registration and are $20 for adults and $12 for children 8 and older, will also highlight the birds’ adaptations, like hooked beaks, sharp talons, keen vision and aerodynamic shapes.

“They’re a moving vehicle,” Bradley said. “They just happen to be a living one.”
LAUREL GRAEBER