Zendaya unveiled a big hair change on her Instagram Story this afternoon, but some fans on social media wondered whether Zendaya was subtly making a bigger life announcement because of the ring she was wearing. Hair-wise, the actress revealed she’s gone red and short (a true Mary Jane Watson move) after having long brown hair throughout the Spider-Man: No Way Home press tour. “It was time for a change,” Zendaya captioned the post, tagging colorist Sarah Shears of One Eleven Lounge.

Fans also noticed Zendaya had a yellow diamond ring on her left ring finger. Some pondered whether it was an engagement ring, given that Zendaya and co-star Tom Holland are in a serious relationship, but others were quick to point out that it looks a lot like the yellow diamond Bulgari ring Zendaya bought for herself that she has regularly worn.

“This is my splurge, my treat-myself,” she told British Vogue for its October issue interview when asked about the 5- or 6-carat-looking ring. “I do get a little employee discount,” she said with a laugh, referencing her role as a Bulgari ambassador. “It feels like it’s gonna be an heirloom, like one day I can give it to my grandchildren.”

I thought she was wearing an engagement ring for a sec!

Am I the only person freaking out about that diamond ring on Zendaya’s finger in her latest ig story?! Just when Tom says he wants to start a family!!!

No it’s Bulgari. She’s been wearing it everywhere😂

Zendaya can be seen wearing the ring during the press tour, although it’s typically on her right ring finger: 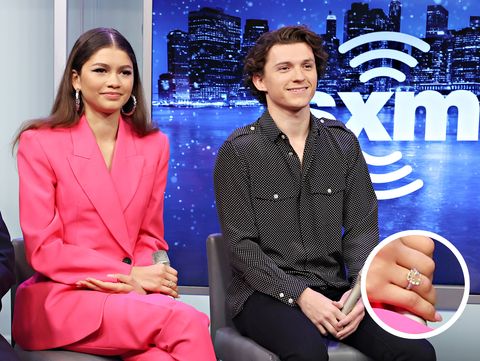 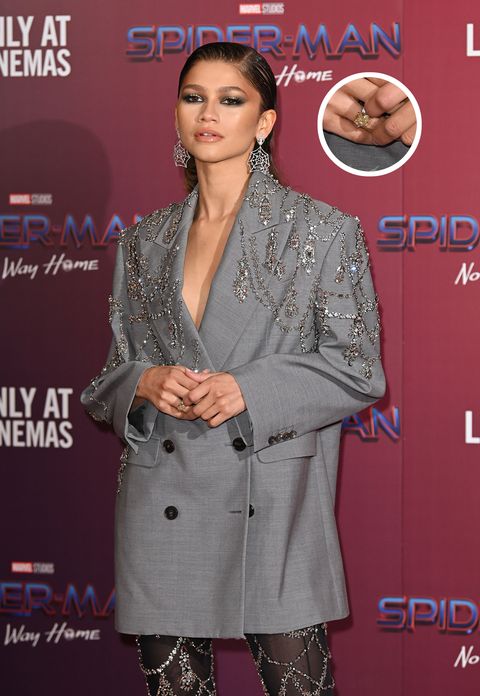 Zendaya and Holland have made a point to keep details of their romantic relationship as private as possible, so even if they were engaged, they may opt not to share the news with the world—at least initially.

Holland spoke to People this week about his hopes to start a family next, though. “I’ve spent the last six years being so focused on my career,” he said. “I want to take a break and focus on starting a family and figuring out what I want to do outside of this world.”

“I love kids. I can’t wait to be a dad—I can wait and I will, but I can’t wait!” he continued, adding if he wasn’t an actor, he’d be a teacher. “If I’m at a wedding or a party, I’m always at the kids’ table hanging out. My dad’s been such a great role model for me. I think I’ve got that from him.”

Speaking with GQ recently, he explained when it came to his relationship with Zendaya, the two never wanted it to become public. “I’ve always been really adamant to keep my private life private, because I share so much of my life with the world anyway. We sort of felt robbed of our privacy,” he said, referring to when a video of them kissing surfaced this summer, confirming they were a couple.

In terms of what he does share now, he said, “It’s not a conversation that I can have without her. You know, I respect her too much to say… This isn’t my story. It’s our story. And we’ll talk about what it is when we’re ready to talk about it together.”

Dunder Mifflin Paper Company, Inc.: Here’s How Much The Cast Of ‘The Office’ Earned From Season 1 To Season 9
Entertainment