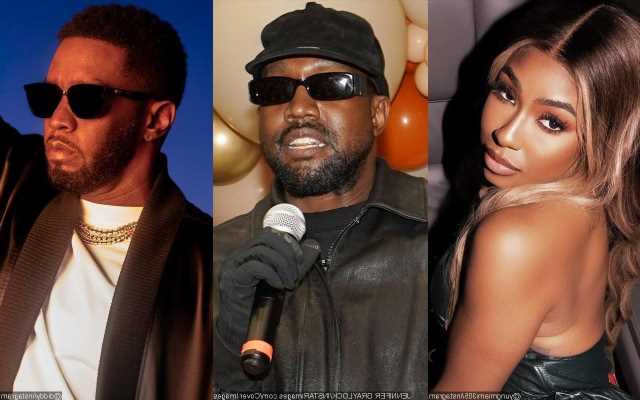 The one ohalf of City Girls seemingly defends her rumored boyfriend Diddy as the femcee is seen retweeting a Twitter post that mocks Ye for his headline-making antics.

AceShowbiz –Yung Miami has inserted herself in the full-week drama surrounding Kanye West‘s Yeezy show during Paris Fashion Week. On Friday, October 7, the City Girls rapper was seen retweeting a post that mocked Ye for his headline-making antics.

The said tweet read, “Kanye is a f**kin lunatic.” Yung Miami didn’t directly slam Ye, but her move was enough to show that she isn’t a fan of the Yeezy designer, who recently came at her “papi” Sean “P. Diddy” Combs.

Earlier that day, Ye shared a screenshot of his chat with Diddy. “I didn’t like our convo. I’m selling these tees. Nobody can get in between me and my money,” so read Ye’s text. “Never call me with no bulls**t like that again unless you ready to green light me. Cause anybody that got on that tee is me.”

Diddy later suggested they meet in person to solve the issue, but Ye didn’t like the idea. Ye fumed, “N***a f******k you. You fed.” The Bad Boy Records founder then replied in the comment section, “See you soon!”

Diddy also urged Ye to end the Internet games. The Chicago rapper, however, argued, “This ain’t a game. Ima use you as an example to show the Jewish people that told you to call me that no one can threaten or influence me. I told you this was war. Now gone get you some business.”

Ye also blasted Boosie Badazz (Lil Boosie), who has been vocal about his criticism of Ye. “Don’t speak on me Lil Boosie speak to me yeah little nerd a** me. Come smack me or come shoot me Im the one that got bullied by the entire black celebrity community now Im back to shoot the school up,” he told the Louisiana rapper.

Prior to this, Diddy appeared to defend Kanye after the latter wore “White Lives Matter” T-shirt at his Yeezy show on Monday, October 3 during PFW. “My boy is a super, super, super free thinker,” Diddy said of Ye on “The Breakfast Club”. He continued, “And a lot of times, what he means is, like, misconstrued, you know what I’m saying?”

Diddy added people “don’t have to condemn Kanye or cancel him,” but admitted the shirts were “very tone-deaf.” He went on to say, “I understand white lives do matter, but it’s not that. (‘Black Lives Matter’] was our slogan.”

However, Diddy later clarified his initial comments on the ex-husband of Kim Kardashian. “I am not about to be addressing every last thing that’s going on in the world on the Internet but the thing I do have to address is this ‘white lives matter’ T-shirt,” Diddy said in an Instagram video. “I’ve always been there and I will always support my brother Kanye as a freethinker.”

“But the ‘white lives matter’ T-shirt, I don’t rock with it, you know what I’m saying?” the 52-year-old Harlem native continued. He stressed, “I’m not with it.”