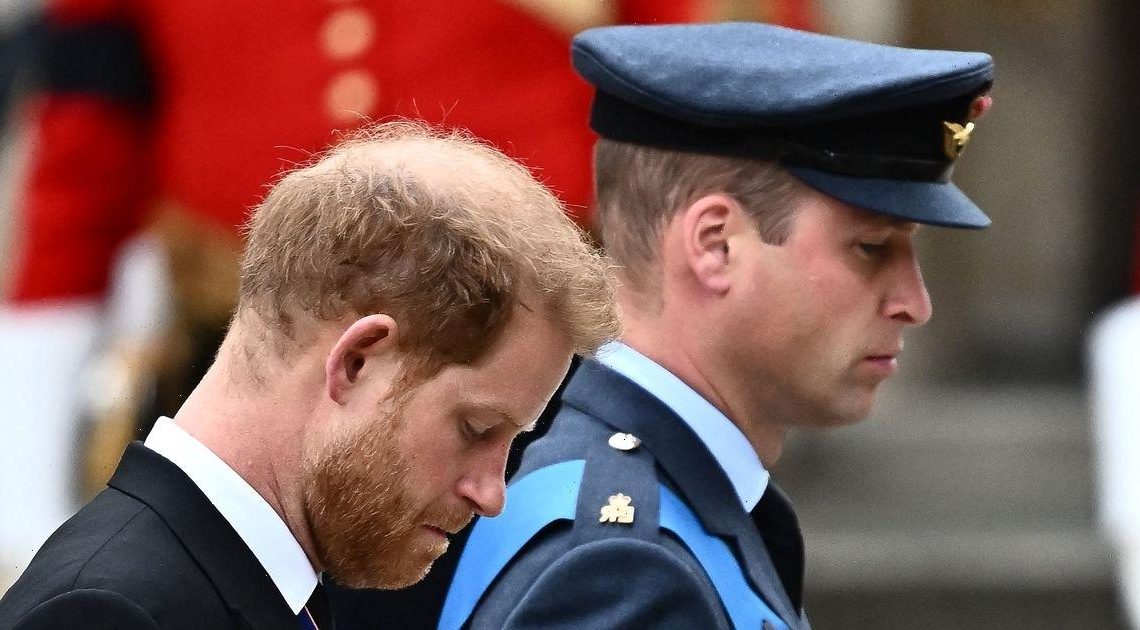 As the Queen’s funeral got underway at Windsor on Monday, Prince William offered his estranged brother a telling gesture, that an expert claims could be the first glimmer of hope to ending their long running feud.

A number of candid shots of the royals were taken at Windsor Castle as the funeral party awaited the arrival of the coffin so that the procession could begin.

In the images, King Charles, Princess Anne, Peter Phillips, Prince Andrew, Prince Edward, William and Prince Harry can be seen alongside the other male royals who walked in the procession – but Prince Harry appears to be distanced from the group as they broke off into clusters to engage in conversation.

According to body language expert Judi James, it was obvious that Harry was "physically excluded" from the group, but a gesture from William soon sought to change this – and could even be the beginnings of an attempt to repair their long running feud.

She told the Mirror : "Harry looks physically excluded or sidelined in this grouping with some royals gathering around Charles while the others stand with the Earl of Snowdon, almost with their backs turned to Harry.

"The one moment we have not seen during this visit, despite Charles’s warm words during his speech, is any form of physical meeting between Harry and his father Charles.

"All the attention has been on Harry and William but they have performed a couple of forced-looking chatting rituals in the past, and in the Oprah interview it seemed to be his father that received all the really negative body language responses from Harry, rather than William.”

For all of the latest updates, sign up for OK!'s Royal newsletter .

Judi then went on to outline how Prince William had “hung back slightly” and even added that it was a move which could “hopefully be prompted by empathy” and a genuine desire to try and stand in solidarity with his younger brother.

Whether this is enough to mend the complicated relationship between them remains to be seen, but Judi is “hopeful” that it signals a breakthrough and could even one day lead to a reunion.

Harry and William’s rift has been the subject of intense scrutiny in the past few years, and even mores in the past few days as the brothers appeared to set aside their difference to come together to mourn their beloved grandmother The Queen.

Their tense relationship reportedly started when William expressed concerns about how quickly Harry and Meghan Markle ’s relationship was progressing ahead of their wedding in 2018.

This 100 page tribute looks back at the life of our most beloved monarch, Queen Elizabeth II, marking key events during her remarkable 70-year reign, as well as her childhood as a young princess, her enduring love for Prince Philip and her family, and the lasting legacy she leaves our nation.

This edition is available to buy in stores now or it can be purchased online here.

The row soon escalated with Harry even claiming he was “trapped” in the royal system during a bombshell interview with Oprah Winfrey that explored everything from racism, to mental health and an alleged lack of support from the palace during a difficult time.

Understandably, the interview strained an already tense relationship between Harry and the rest of his family, but at The Queen’s funeral this week, and in the days prior to the historic occasion, any hint of a rift appeared to have been shelved for the period of mourning, as both brothers focused on their grandmother’s memory, rather than any ongoing feud.

William, dressed in his RAF No1 uniform, and Harry, in formal funeral wear and medals, marched slowly behind their father, the King, as the Queen’s coffin was carried from Westminster Hall, at the heart of the Palace of Westminster, where she had been lying in state to a funeral service at Westminster Abbey.

They also united again at the smaller memorial service held in Windsor, with Prince William and his wife Kate even stepping aside so that Harry and Meghan could sit beside them on the front pew during the service.