Home » Celebrities » ‘What the f**k is that?’ Gemma Atkinson calls for help as she spots rash during filming 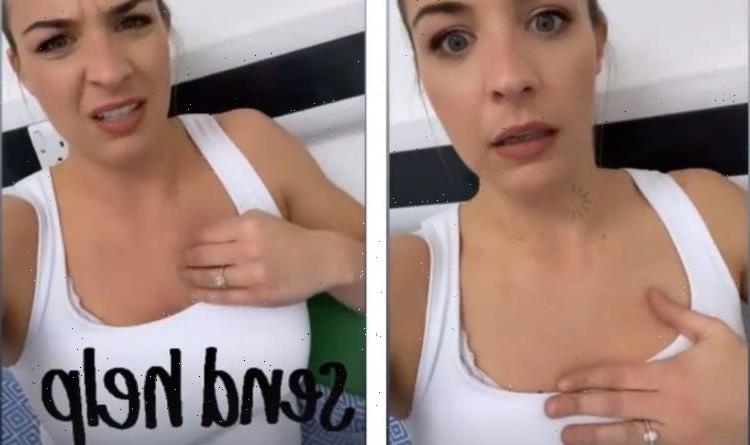 ‘What the f**k is that?’ Gemma Atkinson calls for help as she spots rash during filming

Gemma Atkinson had been discussing ways new mothers can get help to deal with physically traumatic childbirth when, seconds later, she caught sight of marks on her body that she didn’t expect. Visibly alarmed, the 37-year-old TV star exclaimed: “What the f**k is that?”

“Just a heat rash,” she consoled herself, before calling for advice from her followers by asking: “IS IT a heat rash?”

“Need to go make-up,” she told her followers, before turning and fleeing from the camera.

The rash in question appeared to be a faint cluster of marks just under the centre of her collar bone – but it had left Gemma feeling flustered while filming for work.

A chilly winter day seemed unlikely to have caused a heat rash.

However, Gemma had filmed herself earlier in the day working up a sweat in the gym, her hair tousled and messy as she negotiated repetitive jumps.

Hours previously, she had also indulged in some red light therapy.

Healthline.com describes the therapy as “controversial”, adding that it uses “red low-level wavelengths of light to treat skin issues, such as wrinkles, scars, and persistent wounds, among other conditions”.

Red light beds such as the one Gemma was using at home are often found in salons due to their perceived ability to increase energy within human cells.

It is said that stretch marks and wrinkles can be treated through the therapy, as well as the skin condition psoriasis and issues with slowly healing wounds.

It is even heralded as a way to ward off undesirable side effects from chemotherapy.

Other health benefits include a perceived increase in collagen production for plumper looking skin, repair of sun damage, prevention of pesky recurring cold sores, pain and inflammation relief after suffering arthritis or joint injury, and many more.

However, critics argue that not enough is known about the therapy to be able to prove that it is always effective.

Before the rash disaster, Gemma had been chatting to her followers about her appearance on C4’s Packed Lunch, where she shared her experiences to help those suffering from trauma in childbirth.

“I had [a traumatic birth] and lots of women do,” she explained on the programme.

“Thank you for your lovely messages,” she added of the reaction from fans who’d seen the footage.

“Loads of you have said you’ve had similar and since watching, you now know how to get help and who to approach.

“I’m really pleased that you’ve taken something from it,” she beamed.

That was all she was able to say before the discovery of the rash stopped her chat in its tracks.

Golden Globes 2022 will have no celebrities, audience or red carpet