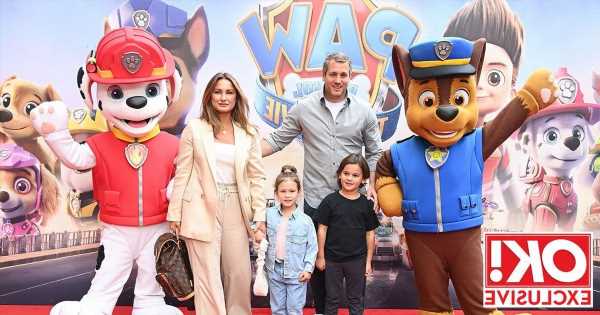 It’s Brentwood to Hollywood for Sam Faiers – and we can now exclusively reveal a first look at the former TOWIE star's big screen debut.

The 30 year old shared her excitement at landing her first movie role last month, and now Sam has made her film debut in PAW Patrol: The Movie.

In this exclusive clip of Sam’s cameo shared with OK!, Sam’s animated character can be seen in a scene on the subway.

Sam's character, who she also gushed looks like her, slides down one of the train’s handrails as she and another character ask PAW Patrol for help after Mayor Humdinger puts a loop in the subway track and all the passengers are left hanging upside down!

She says: “This is a new low for subway service in this city, and that is saying something!”

The reality star joins a whole host of famous faces voicing characters in the kids’ movie, which is out now, including Kim Kardashian West, director Tyler Perry and talk show host Jimmy Kimmel.

Kim, 41, plays a sassy poodle called Delores who works in an animal shelter.

Sam’s son Paul, five, is also in the movie, and as they attended the premiere for the film earlier this week, Sam admitted it was a “privilege” to be a part of the famous franchise.

“yay! @pawpatrol The Movie is in cinemas NOW What a privilege to be part of such a fantastic film,"wrote Sam as she shared snaps from the premiere.

"From the start to finish we were gripped it’s a must see! (ps listen out for me I’m the very cross lady on the subway) @paramountuk."

She and Paul were also joined by his his sister Rosie, three, and Sam’s partner Paul Knightley for the premiere in Leicester Square.

Also in attendance were Giovanna Fletcher and her singer husband Tom Fletcher, who recently signed up for this year’s series of Strictly Come Dancing.

Sam announced the news that she had landed her first film role last month.

She wrote on Instagram: “I still cant quite believe Paul and I are in the new Paw Patrol Movie.

"Ever since I can remember we have been huge Paw Patrol fans in our house and still are. Check out my character I think she even looks a bit like me.

Her exciting announcement came just weeks after she revealed that she had quit filming her ITVBe show with her sister Billie Faiers, The Mummy Dairies.

Billie has continued filming with the channel and will be starring in a new show with her family, husband Greg and children Nelly and Arthur, called The Family Diairies.

PAW Patrol: The Movie is out now, For all the updates on the Faiers family and more sign up for our daily OK! newsletter here.

Lionel Messi PSG: How his wife and family will live