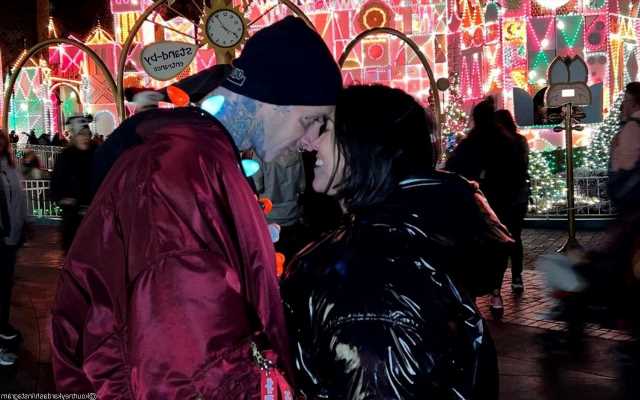 The Blink-182 drummer is urged by social media critics to delete the ‘cringe’ snapshot that sees him planting a kiss on the ‘Keeping Up with the Kardashians’ alum’s foot.

AceShowbiz –Travis Barker may have to think twice before making social media posts. The Blink-182 drummer has been facing backlash after he seemed to reveal his foot fetish with a new PDA-filled photo.

On Saturday, December 18, the 46-year-old musician took to his Instagram account to share a picture that appeared to be him planting a smooch on Kourtney Kardashian‘s foot. The image showed the duo decked out in matching pink cheetah print pajamas as the drummer held her ankle with both hands and tenderly kissed the sole of his fiancee’s foot.

“All I want for Christmas,” Travis captioned the post. In the comment section, the former “Keeping Up with the Kardashians” star flirtatiously wrote, “You’ve been extra good,” prompting the rock star to reply with heart eyes emoji.

However, most of their fans seemed less than impressed with the PDA-packed snap. One commented, “some things we don’t need to see” with others chiming in with variations of “WHAT” and “Travis wtf.”

Some Instagram users also urged Travis to delete his “cringe” post. One social media critic said, “Please stop it. Cringe,” while another commented, “You have time to delete this.” Someone else asked Travis, “Did U mean to post this on main?”

Though so, there were still some followers who defended the couple. One user wrote, “We must not underestimate the complexity of this image. It signifies that you are indeed his constant sole-ace. Keep feeling the need to be advocates with your subtle yet vibrant acts of love.” Another hyped the couple up, “Damn I love you Kourtney and Travis. My fav couple.”

Travis’ post came after he and Kourtney enjoyed family time in Disneyland. At the theme park were also Reign Disick, Kourtney’s 7-year-old son with her ex Scott Disick, and Travis’ 18-year-old son, Landon.

In one photo shared by Kourtney on her Instagram account, Travis could be seen carrying Reign on his shoulders. Meanwhile, Travis took to his own page to post a picture of the blended family enjoying a ride on the Space Mountain roller coaster. Other photos showed holiday decorations and festive food they sampled at the park.