Home » Celebrities » These Tweets About Chris Evans’ Chest Tattoos Are So, So Thirsty 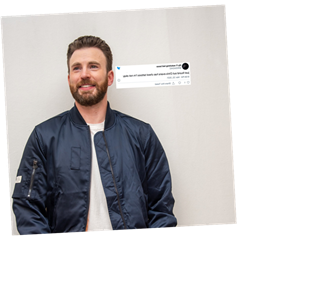 These Tweets About Chris Evans’ Chest Tattoos Are So, So Thirsty

New flash: Chris Evans has chest tattoos. The Avengers star has managed to keep his chest ink under wraps for so long, that fans had no idea he was so tatted up. But after they caught a glimpse of his inked up chest, it was game over. Tweets about Chris Evans’ chest tattoos are taking over Twitter and they’re thirsty AF.

The ~breaking~ news of Evan’s chest tattoos hit the internet on March 23 when he sat down for a Zoom interview with ACE Universe. The interview covered a lot of important ground about his career, but was soon overshadowed by the tattoos once fans took notice. Evans left his floral shirt slightly unbuttoned that day, and the tattoos on his chest peeked out just enough to get fans talking.

Screenshots of Evans’ tatted chest soon flooded Twitter, and you can see all the best tweets below.

Evans’ chest isn’t the only part of him covered in tattoos. On his ribcage, he has a tribute to his late friend Matt Bardsley who passed away in 2003. He also has his dog’s name, Dodger, tattooed below that one.

Evans’ tattoos may have caught fans off-guard, but they certainly aren’t complaining.

The Easiest Way to Start Fasting Is to Stop Eating Breakfast