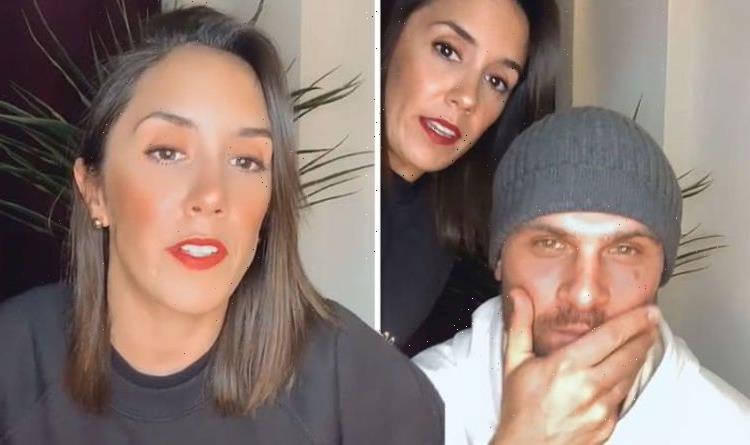 Janette Manrara, 37 and Aljaz Skorjanec, 31, spoke candidly about their dance tales in the couple’s final podcast. The Strictly Come Dancing favourites were joined by their pals Jason Gilkison and his partner James Carney.

The Miami-born performer was cheekily scolded by her pals after it was revealed she was the cause of a dance move gone wrong, costing them thousands of pounds worth of surgery.

It comes after Janette and James had been performing for a USA tour and the pair had decided to celebrate New Year’s Eve together.

Speaking on Twist and Shout, James remarked: “I was your official partner before Aljaz came along.”

Janette replied: “Oh my God. Yes. So James and I were dancing out one night on this USA tour.

“He did a lift with me. This was after I started drinking by the way.”

The Strictly star went quiet as her pal took the opportunity to dish on their dancing blunder.

James interjected: “The story goes…. it was in the years that we were in Pittsburgh. You guys had done a New Year’s Eve show.

“We all went out the next day for New Year’s Day. We were out celebrating having a little tipple.

“As you know, I like to do a little shuffle here and there. I decided to try out a new lift with a certain little Polly Pocket.”

His other half Jason – who worked as a choreographer on Strictly – commented: “A very expensive lift.”

James continued: “I felt a little tinge in my back but the alcohol numbed it. I felt fine.

“A couple of days later I found out I had two popped discs in my lower back.”

James admitted that after lifting Janette into the air he suffered a back injury and was forced to pay a large sum of money to fix his issue.

“I haven’t invoiced [Janette] to this day.”

His partner and Strictly’s Creative Director joked that he ended up banning Janette from seeing his husband.

Jason added: “I banned him from seeing Janette for the next year.”

Janette let out a chuckle, as her beau Aljaz remarked: “I’m happy that I was taken out of the story.”

Meanwhile, the performer shared some big news as she announced plans to return to Strictly in a new capacity.

Speaking on Morning Live today, alongside Gethin Jones, Janette revealed she has been asked to choreograph for the BBC show.

She said: “As you know, all of the Strictly professionals are in a social bubble. “I’ve been asked to come in and choreograph some of the pro dances this season.”

Strictly Come Dancing returns to BBC One next month.

Jennifer Lopez went to Venice for the D&G show: will she stay for the film festival?
Entertainment