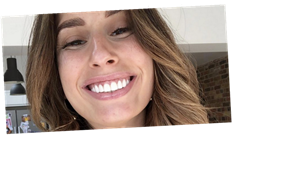 Strictly Come Dancing bosses reportedly hope to recruit Stacey Solomon for the next series of the show.

Stacey, 30, was reportedly a top choice to compete for the Glitterball trophy last year, but is said to have turned the show down as she didn’t want to quarantine away from her family.

But, it’s understood Stacey, who recently revealed she and Joe Swash are moving into their “forever home, is “more open” to the idea of taking part this year as things begin to return to normal following the pandemic.

A source told The Sun Online: “Stacey’s name was in the frame for Strictly last year but she didn’t want to quarantine away from her kids. The pandemic meant she wanted to be at home as much as possible to home-school her eldest two boys and because her youngest Rex was still a baby.”

The source added: “Now things are on the roadmap to getting back to normal, Stacey is much more open to the idea of making the serious commitment which Strictly requires.”

Meanwhile, the BBC are said to be hoping to “lure” Stacey away from ITV for good.

Stacey is a regular panellist on Loose Women and has become increasingly popular over recent years with her posts on Instagram page, including her Tap to Tidy shares.

The insider added: “The Beeb sees huge potential in Stacey and are keen to lure her away from ITV for good. With the offer of Strictly on the cards they are promising her the opportunity to take her TV career to the next level.”

BBC declined to comment when contacted by OK! online. Meanwhile Stacey’s representatives are yet to respond.

Stacey, who recently bravely opened up on her battle with imposter syndrome, recently released her own book Tap to Tidy to share her clever crafting, food and home hacks with her legion of fans.

The TV star has also landed her own home improvement show on BBC following the success of her organisation skills, which she shares on the 'gram.

Speaking about the upcoming show to the Mirror, the 31 year old said: “There's always that one room or cupboard I can't face sorting out at home but once I've done it there's nothing more satisfying.

“I’ll be sharing my ultimate tidying and upcycling tips, from Lazy Susans to tension rods, there'll be lots of great ideas to give viewers the confidence to finally tackle that cupboard.”

As well as Stacey, the series will also feature a team of helpers, including home organiser Dilly Carter, carpenter and upcycler Robert Bent and cleaning expert Iwan Carrington.

Families will have to empty out their homes and put all their belongings in a warehouse, before deciding which items to dispose of.

A pilot episode will air this spring before the six-part programme airs later in the year.

BBC commissioning editor Emily Smith said: “We're so excited for this series with Stacey and her team.

“It's amazing what they can do to turn homes around without having to spend loads.”

This Cozy $20 Throw Blanket with Over 13,000 Five-Star Ratings Looks ‘Much More Expensive Than It Is,’ and It’s on Sale