Home » Celebrities » Stretching the Truth: How Incels Are ‘Jelqing’ for a Bigger Penis Stretching the Truth: How Incels Are ‘Jelqing’ for a Bigger Penis

It’s no secret that there are a lot of angry young white men on the internet; it’s also no secret that a substantial percentage of these men are angry because they aren’t getting laid. Known as “incels” (short for involuntarily celibates), these men are fueled by the belief that the world is made up of “Chads” (conventionally handsome and successful men) and “Staceys” (women who are exclusively attracted to Chads), while any man who falls outside this dichotomy is consequently unfairly deprived of an emotionally and sexually satisfying life.

Incels have attracted widespread media coverage in recent years, due to the fact that their victim-blaming, misogynistic philosophy has left something of a body count: the manifesto of Elliot Rodger, the 2014 Isla Vista shooter, has become something of a sacred text within the community, and Toronto van attack suspect Alek Minassian, who took 10 people’s lives last year, was reportedly also a self-identified incel. But at the heart of the ideology, the goal of any incel is to become more like a Chad — and according to a New York magazine investigation, they’re willing to spend staggering amounts of money to get to that point. The piece documents the panoply of ways that incels are willing to change their bodies to become “Chads,” their term for conventionally attractive men, ranging from spending thousands of dollars on quadricep and deltoid implants to undergoing “testicular enlargement” surgery. 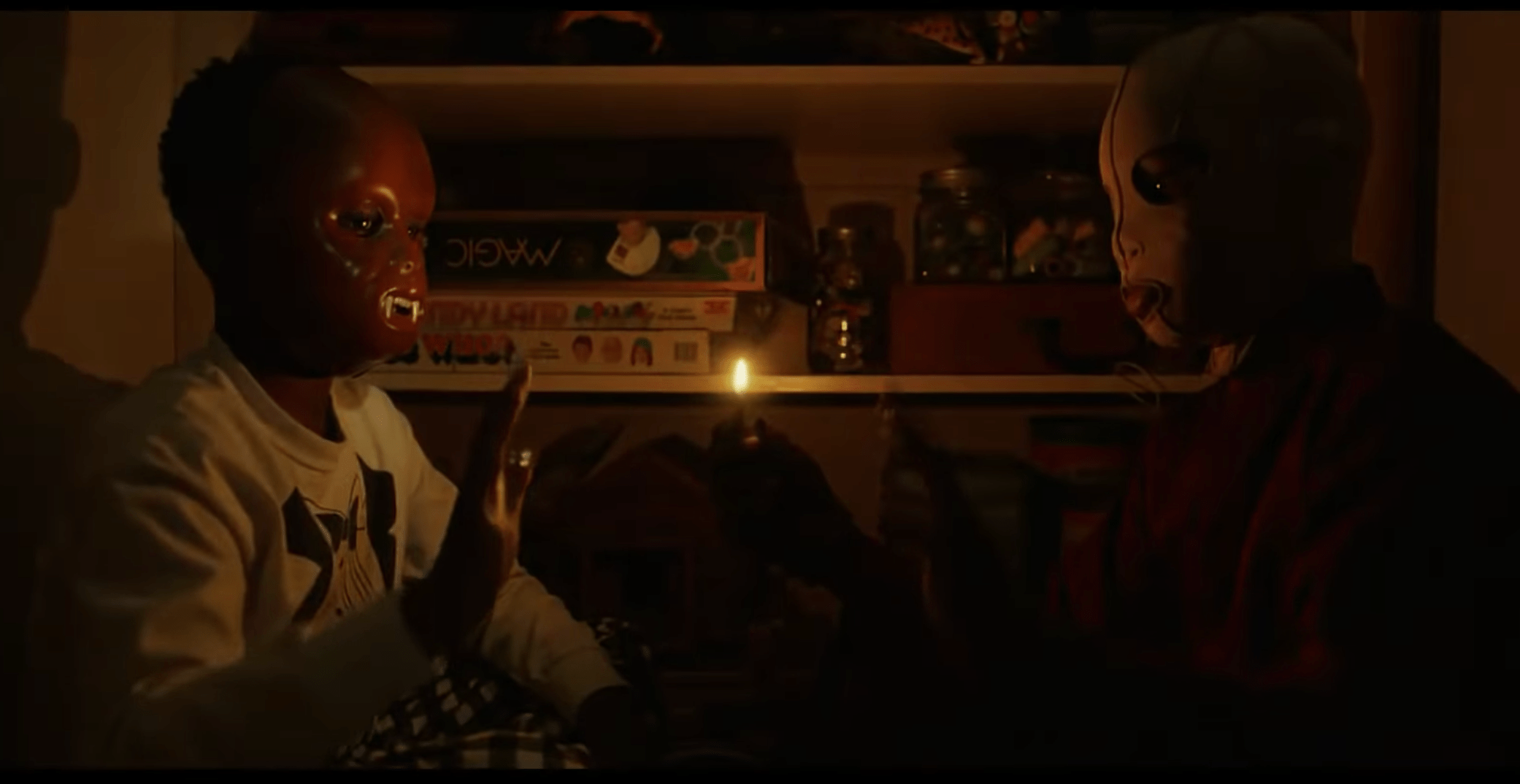 Jordan Peele's 'Us' Reveals New Trailer Ahead of Super Bowl

Although the New York magazine piece primarily focuses on the costly surgeries incels are willing to undergo in order to achieve the hypermasculine appearance of their dreams, the truth is that there are a number of other, less costly (though arguably just as extreme) DIY methods that have been circulating around the internet for years. Perhaps the most terrifying among them is “jelqing,” a term used to describe the process of literally stretching out one’s penis in order to make it larger.

The concept of “jelqing,” if not the actual term, has been around for as long as men have felt insecure about the size of their penises…which is to say, a very long time. (Some proponents claim it stems from ancient Arabic texts, though this is unconfirmed.) Put simply, jelqing entails stretching out, or “milking,” the semi-erect organ for a set amount of time per day, which theoretically creates small tears in the penile issue, forcing the growth of new cells and thus a small increase in size. (Others have suggested that jelqing enlarges the blood chambers of the penis, creating more blood flow to the penis and thus larger erections.)

Of course, there’s very little actual research suggesting that this is true, says Yaniv Larish, MD  partner at Fifth Avenue Urology in Manhattan. In fact, when patients have approached him asking if they should try jelquing, “I routinely advise patients not to perform it,” he told Rolling Stone. “And the reason is because when you do that stretching technique, essentially what you’re causing is a microvascular injury to the erectile bodies of the penis, the corpus cavernosa,” the chambers in the penis that fill with blood when you get an erection.

Stretching the penis, says Larish, could potentially damage the corpus cavernosa to the degree that men could be at risk for developing Peyronie’s disease, a condition that can result in severe curvature of the penis and, in some cases, erectile dysfunction. “A guy who is on this quest to gain length of the penis and has a totally normal functional penis, ends up damaging the penis to the extent where it can no longer function as a sexual organ,” he says. None of this, however, have stopped men on the internet from trying jelqing.

Why are men trying jelqing?

While jelqing isn’t exclusively popular among men’s rights activists and incels — obviously, the desire to obtain a larger penis is a fairly universal one —, it does seem that the practice has gained prominence in communities where the quest to attain an ideal physical appearance is paramount. In the subreddit r/IncelsWithoutHate, one of the many forums that popped up on Reddit after r/Incels was banned in 2017 for inciting violence against women, one user lamenting his “pathetic” small penis (which he says measures 4.4 inches in girth), shares his own unsuccessful experience with jelqing to add length: “I did the beginners program on pegym [a popular penis enlargement forum] for 5 months and then 3 months of an advanced one. Not even 0.1 inch change,” he grouses.

Despite this anonymous user’s less-than-ringing endorsement of jelqing, discussions of the practice and other “dickmaxxing” techniques are common on incel forums like Lookism.net and incel.co, where users share their experiences with jelqing, both positive and negative: on a thread on the latter website, for instance, one user grouses, “I’ve got a small dick, 3.5”. Anyone here know how to grow your penis?…I know it’ll never be in a foid [short for “feminoid,” an incel slang term for a woman], but id like it to look less pathetic.” Such posts are marked by a shared obsession with the ideal male body and, perhaps more to the point, a deeply held belief that such a body is ultimately unattainable, no matter what extreme methods one may try. “If ur dick is over 6 inches like mine jelqing is a waste of time,” one user writes, to which another derisively responds, “6 is tiny. The MINIMUM requirement to have DECENT sex is 6.5×5.”

Larish suggests that many of the incels obsessing over their penis size may suffer from body dysmorphic disorder, a condition shared by one in 50 people. “You could ‘justify’ it if a man was doing it to enhance the pleasure of his partner. You could sort of imagine they’re not doing it bc of their view of the member, they’re doing it to gratify someone else. If you have men who are not having sex, then in absence of a partner, who are they doing it for? Only for themselves, and what’s to say their member is requiring of any sort of adjustment other than their self-view? And that’s how BDD can be categorized – you have an unrealistic or disporportionate view of your own body in relation to reality and you wanna do something about it.

Central to the discussion surrounding jelqing, “dickmaxxing” and the incel’s quest to achieve the ideal penis size, there’s one irony worth noting: none of these guys are ostensibly having sex. Following incel logic to its conclusion, there’s seemingly little point in trying to enlarge a member that isn’t getting much use to begin with, which is why Larish speculates that many of these men may suffer from body dysmorphic disorder, which he defines as “an unrealistic or disproportionate view of your own body in relation to reality.”

“You could ‘justify’ [jelqing] if a man was doing it to enhance the pleasure of his partner. You could sort of imagine they’re not doing it because of their view of the member, they’re doing it to gratify someone else. If you have men who are not having sex, then in absence of a partner, who are they doing it for? Only for themselves,” he says.

But within incel culture, the obsession with achieving the ideal penis size is arguably not even about negative self-image, so much as it’s about perpetuating their own twisted view of the world: despite incels’ stated commitment to becoming Chads and fulfilling their quest to get laid, as evidenced by the endless discussions over whether it’s even “worth” having sex with a woman if your penis is below a certain size, the bar to achieve the ideal male body or a semi-satisfying sex life is continuously set higher and higher. This doesn’t just have the effect of keeping incels firmly in self-loathing territory; it also further fuels their resentment toward the “Chads” and “Staceys” they believe are preventing them from living the spiritually and sexually satisfying lives of their dreams.

When it comes down to it, incels are singularly obsessed with solving a problem that they ardently believe does not have a solution; to believe otherwise is to believe in a world that is built on something other than female shallowness and avarice and greed, which would totally negate their worldview. And although jelqing is ostensibly about getting a bigger penis, for incels it’s not even really about that. It’s about men stretching and pulling their way to a better, more fulfilling life that, when it comes right down to it, they don’t even really want to begin with.